Therapy for a Vampire 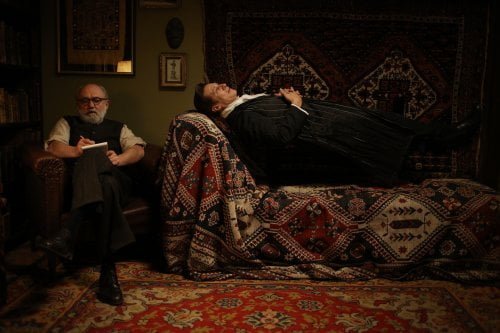 Count Geza von Kozsnom (Tobias Moretti) is a troubled man. He lost his lover, Nadila, 500 years ago and has had to endure life with his demanding shrew of a wife, the Countess Elsa (Jeanette Hain). One night, in 1932 Vienna, he pays a visit to a very famous man, Sigmund Freud (Karl Fischer), and asks the renowned psychologist to provide “Therapy for a Vampire.”

This Austrian vampire comedy from writer/director David Rühm had me chortling right from its cat burglar opening credit sequence. Unlike last year's "What We Do in the Shadows" from New Zealand, Rühm takes a more classical route, following in the footsteps of Mel Brooks' "Young Frankenstein." It's 1930 Vienna and Count Geza von Közsnöm (Tobias Moretti) has scheduled evening visits to Dr. Sigmund Freud (Karl Fischer). He has tired of his 500 year marriage to the insecure Countess Elsa von Közsnöm (Jeanette Hain, "The Reader"), desperate to see her own reflection. Freud suggests he court detente by commissioning a portrait, suggesting his assistant Viktor (Dominic Oley), an aspiring artist. But the plot thickens when Geza sees Viktor's girlfriend, Lucy (Cornelia Ivancan, "Woman in Gold"), convinced she is the reincarnation of his lost love Nadila. ('Dervishes decapitated her in Constantinople,' he tells Freud, sounding like Gomez Addams relating something that happened to a distant cousin.) When Lucy finds Viktor with Elsa, she misconstrues the meeting, and the two engage in an escalation of jealousy straight out of a screwball comedy. Rühm's script is witty, his staging of visual gags perfection. He adds one bit of vampire lore, an 'obsessive love of counting,' depicted with fast motion, his vampires like Rain Man on speed. During his sessions, the count levitates from the couch at the mention of Nadila, slamming down again when Freud brings up his wife, the symbolism hilariously obvious. His most inventive idea is having his Count order rare steaks at the restaurant where Lucy works, sucking them dry, leaving crumpled husks that he slams under the table like used pieces of gum. German Expressionism is honored with exaggerated shadows. Moretti, with his David Lynch cowlick, is simply priceless, his posture regal, his comic timing perfection. The film also stars "The Tin Drum's" Oskar, David Bennet, as Radul, the Renfield-like driver of the Count's classic auto. With his leather cap, he recalls Marty Feldman's cowled Igor, just as Viktor's nosey landlady Fräulein Sedlacek (Erni Mangold, "Before Sunrise") seems an homage to Frau Blücher. The production is beautiful as well, with the cobblestoned streets of Vienna, Viktor's artist's garret and roads winding through the forest to a severe castle. Costume is period perfect, with the exception of the Countess, whose vampy frock looks more "Rocky Horror" than "Dracula." "Therapy for a Vampire" is just what the doctor ordered. This isn't just a 'vampire comedy,' but one of the most consistently funny movies of 2016. Grade:

Director Jonathan Teplitzky and writers Frank Cottrell Boyce and Andy Paterson adapt the 1995 autobiography by Eric Lomax, The Railway Man, and bring to light a piece of WWII suffering that few are familiar with. Lomax was one of the 80000 British soldiers to surrender, in what is called the worst disaster in British military history, in the fall of Singapore. The POWs from the fall were shipped off to Burma to build the railroad that could not be built. The story starts out some 20 years after the war with Eric and Patti falling in love and getting married. Soon, though the wedded bliss is shattered when Patti sees that her husband suffers from a severe case of PTSD from his terrible experiences during the war. The worried wife wants to help and turns to Eric’s longtime best friend and fellow ex-POW, Finley (Stellan Skarsgard). Reluctantly, he tells her Eric’s story under the brutal hands of his Japanese captors. The filmmakers use flash backs telling Eric’s story, from just before the surrender to the end of the war after his liberation in 1945. This period is the focus of the film as Eric and the rest must succumb to the torture inflicted on them by the Japanese. Eric, a young lieutenant and engineer, is given slightly better treatment than the tens of thousands laboring as slaves building the railroad. He and fellow officers use their relative freedom to pilfer parts to build a secret radio to get the war news, bringing hope to all. Until the Japanese find the radio. What transpires is a story of heroism and suffering, by Eric, inflicted by Japanese translator-turned-torturer Takeshi Nagase (Tanroh Ishida). The visions of the war set the stage for the real drama of “The Railway Man” as Eric tries to cope, unsuccessfully, with his demons as Patti helplessly watches. That is, until Finley uncovers evidence that Eric’s tormentor, Nagase (Hiroyuki Sanada), is alive and well and runs a tourist business for visits to the Burma railway site. Eric refuses to go to Burma to confront Nagase when a terrible event changes his mind and he makes the journey, alone. When we think of PTSD, we do so in modern terms, as if it is a recent discovery. But, the disorder has been around since man began to war with man. “The Railway Man” is a powerful look at that disorder and how it profoundly affected those forced to survive unthinkable suffering. Colin Firth is sympathetic as elder Eric as he confronts his past. Nicole Kidman’ s Patti is a relatively minor character but the actress gives her some dimension, as does Stellan Skarsgard as Finley. Jeremy Irvine is well cast as the younger Eric and his treatment under Nagose is stomach churning with its graphic depictions of torture. “The Railroad Man” is an earnest and well-crafted film that tells its little-known story with an honesty that resonates today with our own returning warriors.