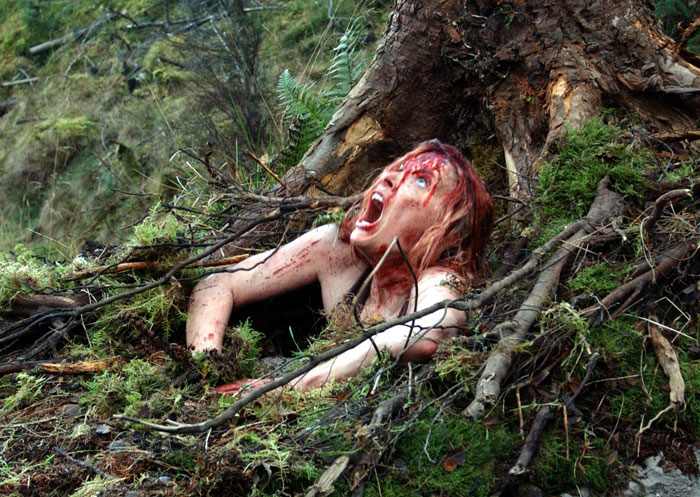 Sarah (Shauna Macdonald) enjoys extreme sports like white water rafting and spelunking with three female friends, but the group has scattered far and wide in the year since a horrific car accident took Sarah's husband and young daughter and left her with bad dreams. Sarah's best buddy Beth (Alex Reid, "Last Orders") accompanies her on the trip from England when their friend Juno (Natalie Mendoza, "Moulin Rouge!") arranges a gathering in the Appalachians as a much needed healing vacation, but the four old friends and two young additions will be plunged into a hellish nightmare when, unbeknownst to them, Juno substitutes an uncharted cave for them to make "The Descent."

British writer/director Neil Marshall ("Dog Soldiers") was lucky that his film was released in Britain last summer over a month before the similarly themed Hollywood release "The Cave." American audiences subjected to that film should be assured in no uncertain terms that "The Descent" is far superior and one of the better genre films to come down the pike in quite some time. Not too many horror films are genuinely scary anymore, but this one is not only exceedingly well done, it is guaranteed to put you through the ringer. From the onset, one can intuit the dynamic that exists among these old friends. Sarah is, of course, in a delicate state and the film's opening shows not only the grisly car accident she endured, but how when she received the news of her family's death - Beth comforted her while Juno kept a traumatized distance. Fourth friend Rebecca (Saskia Mulder, "The Beach," "God Is Great, I'm Not"), a Scandinavian, is down to earth, practical and athletic. Wild cards to the group are Holly, (Nora-Jane Noone, "The Magdalene Sisters"), a young daredevilish type, and Sam (MyAnna Buring), Rebecca's younger half-sister who is a med student. Juno, who has rented an "Evil Dead" like set of cabins in the woods, is obviously a bit egotistical and pushy, waking the others early while exhibiting her physical prowess and stamina. In the morning the group make their way through the woods following Juno's directions and we first know something is amiss when we see her pointedly return a cave map to the glove compartment. The group is astonished when they see the cave entrance, which resembles a female sexual opening to a straight, deep and dark drop. Their first look around is promising, but things take a bad turn very soon when Sarah becomes stuck in a crawlspace and barely makes it out when the tunnel collapses. Sarah soon hears childlike noises (is she losing her mind?) and is the first to spy a crawler, the humanlike species that has evolved to survive its underground environment. Then Juno admits that they are 'discovering' an uncharted cave and not the one they all thought they were exploring. Relationships form and unravel as the women try to find an exit while being hunted. Marshall doesn't substantiate his relationship histories enough to give full weight to his group dynamic drama and he relies once too often on the cheap (albeit in his hands, effective) 'jump out of the dark'scare, but "The Descent" works too well otherwise to quibble. The cast is excellent and production designer Simon Bowles ("Dog Soldiers") and cinematographer Sam McCurdy ("Dog Soldiers") deliver the horrors of dark enclosed spaces without obscuring them. The cave is at times beautiful and at times grisly and the crawlers are some of the ickiest creatures imagined for the big screen. Marshall is also an astute 'borrower' of other films, from the piton clipping suspense of "Cliffhanger," to the video camera revelations of "The Blair Witch Project" to a combined "Carrie"/"Apocalypse Now" moment that wows with its audacity. Above all, "The Descent" leaps to the very top of the 'haunted house' genre, where a group in an enclosed space must battle an unknown, lethal entity. Be forewarned that Marshall does not go easy on the gore, although he was convinced by his U.S. distributor to snip the very end of his British cut to relieve what was thought to be unrelenting bleakness. (While the U.S. version goes out with a jolt, it also strains credulity. The British ending has been foreshadowed with Sarah's character and makes more sense. The DVD will assuredly let you have it your way.) Anyone who was jazzed by this year's earlier "Hills Have Eyes" remake should rush right out and see "The Descent." It will be hard to find a better horror film this year.