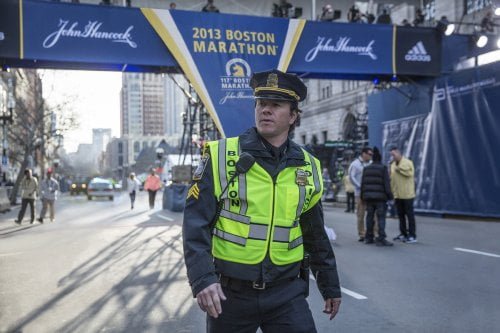 On the morning of April 15, 2013, Sgt. Tommy Saunders (Mark Wahlberg) injures his knee while kicking a suspect's door down. Saunders is almost done with a temporary demotion, but after grabbing a few hours sleep, he's to report as a street cop at the finishing line of the Boston Marathon on "Patriots Day."

Cowriter (with Matt Cook ("Triple 9") and Joshua Zetumer (2014's "RoboCop"))/director Peter Berg and his "Lone Survivor" and "Deepwater Horizon" star have said of their reenactment of the Boston Marathon bombing and subsequent manhunt that they were determined to 'get it right.' So have they? In many ways yes. This procedural thriller showcases the Boston and Watertown Police Departments, first responders, victims, ordinary citizens who both aided and thwarted the investigation and an FBI cautious about Muslim profiling. The Tsarnaevs' activity is timelined throughout, some of it shockingly every day. But Wahlberg's character is fictional, a hybrid device often employed by Hollywood, and in one bizarre scene set in the FBI's temporary local headquarters, we're to believe that he was needed to identify the location of local business's security cameras which may have photographed the bombers. Wahlberg's Saunders is like the Forrest Gump of one historical event, in every place of note, but unlike Gump, Saunders is also involved in just about every point of decision making. This is Hollywood's way of giving the audience a point of view, but it doesn't reflect reality. Carlos Arredondo, the iconic 'man in the cowboy hat' who dove into action at the finish line, isn't even mentioned. Berg's camera lingers over the feet and legs of Jessica Kensky (Rachel Brosnahan, TV's 'Manhattan') and fiance Patrick Downes (Christopher O'Shea) as they wake to meet the day, a bit of irony that feels awfully distasteful (compounded by that knee injury to the film's fictional lead). The Richard family did not want to participate in the film, but the body of 8 year-old Martin Richard is depicted, covered and guarded on Boylston Street by one lone police officer, his eyes brimming with tears, as the sun sets on the day (Richard's body was indeed left at the scene well after all others had been evacuated, but so were the other two killed that day.) All that said, the film really works depicting the bombing itself, the confused shock of it, the quick response to aid victims, the runners still straggling in. The film is edited utilizing the race as a countdown to tragedy, the response to it in real time. The Tsarnaevs watch the coverage on television, Dzhokhar (Alex Wolff, "My Big Fat Greek Wedding 2") contacting his college roommates, who later debate his identity when surveillance photos are released (and we realize their idiotic inaction costs more bloodshed). When the brothers set off haphazardly for their intended trip to NYC, two more we've been watching leading their everyday lives cross paths with them. MIT police officer Sean Collier (Jake Picking, "Dirty Grandpa") is killed. Dun Meng (Jimmy O. Yang, HBO's 'Silicon Valley') is taken hostage and the panicked young man's heroic escape leads to the Watertown showdown where the film really kicks into highest gear. The film wraps with archival footage of a city coming together, Boston Strong. The production, which was mainly shot in Boston and Quincy (the finish line was recreated at a Naval Station, although some scenes were shot on location during the 2016 marathon), is top notch with great editing, sound and sound mixing. Berg weaves his multiple story strands together expertly. Trent Reznor and Atticus Ross's ("The Social Network") score is a melancholic fanfare. J.K. Simmons is the cast standout as Watertown Sergeant Jeffrey Pugliese, a man who finds his suburban town turned into a war zone and rises to the occasion. The cast also includes a gaunt John Goodman as Boston Police Commissioner Ed Davis, Kevin Bacon as the FBI's Richard DesLauriers, Michelle Monaghan as Saunders' wife and Khandi Alexander as a tough policewoman interrogating Tamerlan Tsarnaev's (Themo Melikidze) widow Katherine Russell (Melissa Benoist, "Whiplash"). Michael Beach looks litte like Gov. Deval Patrick but 'The Sopranos'' Vincent Curatola proves a good stand in for Boston's (late) Mayor Tom Menino. With "Patriots Day," the big irony is that the film would have worked a whole lot better if its star had been excised entirely. Otherwise, Berg's put together a very well executed procedural showcasing the quick response, cooperation and detailed work that followed an act of terrorism. Grade: