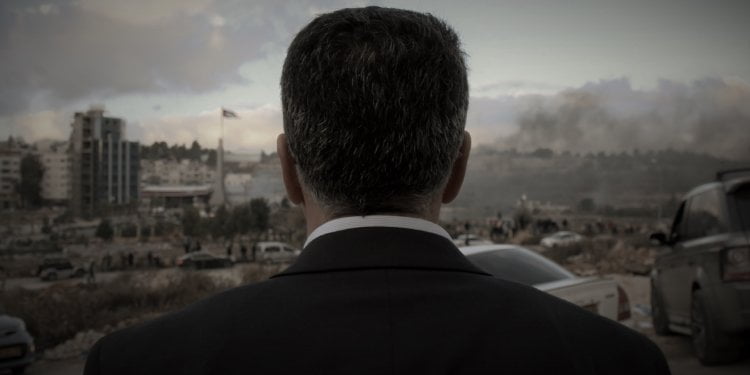 A mere 10 miles from Jerusalem, the Palestinian city of Ramallah often feels a million miles away.  Musa Hadid is everywhere, dealing with sewage issues, contractors who wish to build on private property and Christmas celebrations.  He believes his primary responsibility is municipal, not political, but watching Israeli soldiers fire upon his citizens weighs very heavily on this “Mayor.”

Director David Osit embeds himself with a city mayor whose profile will hopefully rise monumentally after his documentary is released.  Hadid is a wonderful subject, a humble, humorous, hard-working family man dedicated to his city and his people.  Osit joins him as we learn he’s just been reelected and we can see why – Ramallah City Hall is a vibrant modern building with a new fountain that appears to be the city’s pride and joy, crowds gathering for evening light shows set to music.  A new restaurant, Café de la Paix, adjoins where waiters are trained to treat everyone like a VIP.

These things have been accomplished despite the obstacles of the Israeli occupation.  Hadid doesn’t have a television in his office because of satellite issues – with his nose to the everyday grindstone, he is sometimes behind on national news – we see an aid run to get him a newspaper (a great victory will be the procurement of a radio).  After an event that required much planning – the lighting of a Christmas tree complete with Santa and fireworks – the news that Trump has recognized Jerusalem as Israel’s capitol and plans to move the embassy there casts a pall over everything.  Soon Hadid will be on the phone with his wife, looking into the darkness from City Hall as Israeli soldiers fire tear gas on his streets.  Ironically, they storm Café de la Paix to make an arrest.

During the course of the film we will see this mayor on a world tour advocating for a Palestinian state.  When pressed on strategy by a German Delegation, Hadid fires back that it is all about dignity, reminding them that he could be ordered to strip by a sixteen year-old holding a gun.  At one point, he asks if Americans have any idea what life is like for them and we can feel his despair, a pawn in an uncaring world (try not to hiss when Jared Kushner appears on screen).  Osit’s “Mayor” is another step forward in a seemingly endless journey.