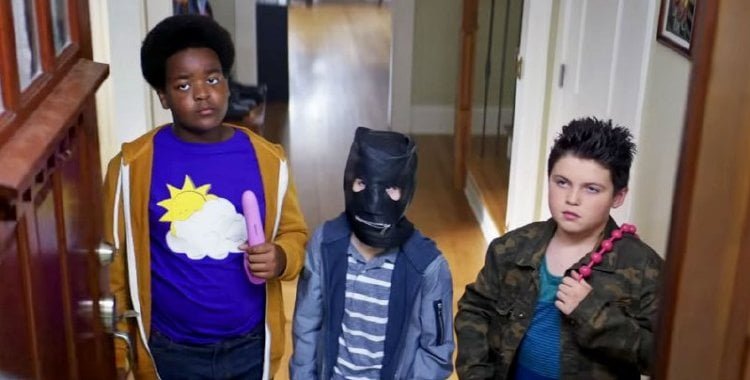 When Max ("Room's" Jacob Tremblay) gets invited to a kissing party by Soren (Izaac Wang), the coolest kid in school, he inveigles invites for his besties Thor (Brady Noon) and Lucas (Keith L. Williams, TV's 'The Last Man on Earth'). Max is dying to plant one on his crush Brixlee (Millie Davis, "Wonder"), but The Bean Bag Boys have no experience with the opposite sex. Max's decision to fly his dad's (Will Forte) drone to the backyard of the teenaged Hannah (Molly Gordon, "Booksmart") to catch her smooching with Benji (Josh Caras) will mix the kids up with drugs, sex toys, a cop, an attack on a fraternity and a dangerous highway crossing, deep-sixing their reps as "Good Boys."

If you think this R-rated comedy is all about little kids flinging F bombs around, guess again. "Good Boys" is one of those rarities, a comedic coming-of-age adventure invested in its characters that delivers well-earned laughs from start to finish. Cowriter (with Lee Eisenberg)/director Gene Stupnitsky (TV's 'The Office') resists easy gross-out gags, instead guiding his three young stars into distinct performances, the comedy derived from their age and innocence. Max, as he'll eventually tell the others, is the 'most mature' one, the nine year-old ready to experience romance. Lucas is the straight arrow, the goody-two shoes of the group whose inability to tell a lie has hilarious consequences yet never comes across as annoying or judgmental. Thor is a good kid who wants to appear cool, a dichotomy that causes him to suppress things that make him happy, like singing. Max is perturbed when his dad thinks his elaborate rig to hide his game avatar breast size manipulation is an effort to pleasure himself and is congratulated for it. He's also warned not to touch dad's drone, an expensive model needed for his work. Lucas is traumatized by his parents' ("Get Out's" Lil Rel Howery and 'The Office's' Retta) announcement of impending divorce, is addicted to the game Ascension and a little too appreciative of SCAB (School Coalition Against Bullying) for his more image obsessed buddies. Thor is oblivious of his (mostly unseen) parents' kinky sex life, thinking a blow-up doll a CPR tool; a dildo, ball gag and anal beads repurposed throughout the film. His hesitation at taking a swig from a bottle of beer will earn him the despised nickname Sippy Cup until he proves his mettle. All three boys have been well educated against drug use, so when Max's dad's drone crashes and is held hostage by Hannah and her friend Lily (Midori Francis), they're horrified to find pills when they steal Hannah's bag to negotiate. In a sweet way, the three boys are trying to protect their tormentors. But Hannah and Lily are intent on getting their Molly back, driving a cross-town war between them and the boys. They'll eventually make that party, but in growing up they all learn to pursue their separate paths toward happiness while also pledging undying friendship. There's a type of twee comedy I loathe that relies on the elderly behaving younger than society deems appropriate, enjoying sex, smoking pot, etc. In a way Eisenberg and Stupnitsky have reversed that formula, but it works here, largely because of the innocence which skews the kids' interpretation of everything ('A nymphomaniac is someone who has sex on land AND sea'). These kids are relatable as well, most having gone through that stage where one wishes to appear worldlier than one's years. The negotiations between Max and Taylor (Macie Juiles) to attain admission of reciprocal attraction between him and Brixnee will be recognized by anyone who's gone through sixth grade. The three boys may represent 'types,' but they're believable types and natural in their performances, Williams foremost among equals portraying the 'uncoolest' with such likable charm. A convenience store scene where Max and Lucas panic because they're holding drugs in the presence of a police officer ('Veep's' Sam Richardson) is side splitting as Max tries to cover while Lucas keeps coming clean ('We skipped school today'), much to the tired and just off duty cop's frustration. When Thor finally drops his veneer of nonchalance after besting Atticus's (Chance Hurstfield) three swigs of beer, his exuberant lead in the school's production of 'Rock of Ages' is a blast (and just the type of thing that might make him popular). There is a sobering moment when the three must consider whether Hannah's accusation - that kids their age are friends because of proximity or parental friendships - is correct, especially as it dawns on them that they fit the profile. "Good Boys" is smart enough to examine the true ties of friendship while delivering non-stop laughs. Grade: