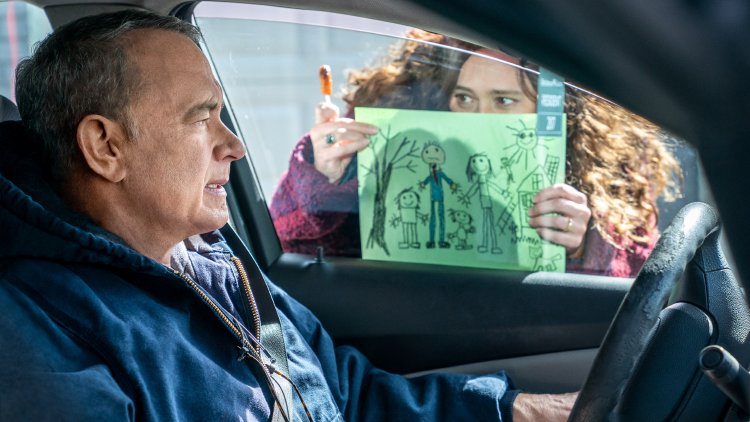 When Tommy (Manuel Garcia-Rulfo, "The Magnificent Seven") backs his U-Haul over the curb in front of the unit his family is moving into, he’ll be chastised by his new neighbor across the street.  The older man takes the wheel and backs it in properly before returning home in a huff.  Later, Tommy and his wife Marisol (Mariana Treviño, TV's 'Narcos: Mexico') will bring over homemade chicken mole as a thank you, but they don’t get any pleasantries in return from “A Man Called Otto.”

Director Marc Forster’s ("Monster's Ball," "Christopher Robin") “Finding Neverland scribe David Magee adapts Fredrik Backman's novel 'A Man Called Ove' and its Swedish film adaptation as a vehicle for Tom Hanks and while it is better than it has any right to be, the loss of that particular brand of Scandinavian humor that made the original seem fresh leaves this one feeling warmed over and off key.  Still, Treviño charms as the ebullient Mexican mother of Luna, Abbie and a toddler with another on the way while Mack Bayda as a trans character new to this version gives Otto Anderson (Tom Hanks) both a connection to his late wife Sonya (Rachel Keller, TV's 'Legion') and additional purpose.

Hanks is introduced being ornery in a hardware store, rebuffing a clerk’s offer of assistance, then complaining when he learns the 5 feet of rope he cut is charged by the yard.   It should hardly matter, as it is quickly fashioned into a noose, but just when he’s about to do the deed, Otto spies that egregious parking job.

As in the original, there is a blackly comic tone to Otto’s always interrupted attempts at suicide paired with sentimental flashbacks of his younger days (where he is played by Hanks’s son Truman) where the nerdish loner is embraced by a beautiful young woman who sees his promise.  Sonya, who lost their child was paralyzed in a bus accident, was the love of Otto’s life and her loss has turned him into the misanthropic curmudgeon he is today.  We also learn this change in behavior led to Otto’s ouster as the community’s former board president, severing his relationship with his closest friend, Reuben (Peter Lawson Jones), when he assumed the role in what Otto refers to as a ‘coup.’  Marisol’s influence, Otto learning of Reuben’s wife and now caretaker Anita’s (Juanita Jennings) own health issues, and a stray cat all serve to break down the cold and crusty barrier Otto has erected.

The original “Ove” transcended clichés found in such Christmas characters as Scrooge and The Grinch, the latter jumping to mind when the irony of Otto’s hypertrophic cardiomyopathy diagnosis is revealed – his heart is *too big*.  And here is where Marc Foster falters where Hannes Holmes and his star Rolf Lassgård did not, the ‘Americanization’ of “Ove” too often lapsing into the artificiality of a sitcom.  Cast against type, Hanks delivers although his character is a less well developed as the grouchy rule enforcer (we wonder why, for example, coworkers are saying nice things about him at the retirement party he walks out of).  The new adaptation’s best addition is in Mack Bayda’s character of Malcolm, Otto’s paperboy and a surprising connection to his late wife, one of the few who helped Malcolm by accepting his transition, human empathy which Otto is quick to assume from Sonya.  (Bigger names, such as that of comedian Mike Birbiglia, have far lesser roles.)

Production designer Barbara Ling (“Once Upon a Time in Hollywood”) replaces the detached Swedish housing community with strange, barracks-like, connected row housing, the type of thing one might have seen decades back at a honky tonk seashore, although it is located in Pittsburgh.  Thomas Newman’s score accentuates the comedy with twangy guitar riffs.  “A Man Called Otto” may not be as good as its predecessor, but Hanks creates a character worth caring about and it affords a breakthrough role for Treviño.

Otto (Tom Hanks) is retired and a grumpy old man living in a gated townhouse neighborhood and he does not like anyone. He lost his beloved wife, Sonja (Rachel Keller), just months ago and was forced out of his life-long job. Facing a life alone, he has made the biggest decision of all: to end his life. That plan is interrupted by his new neighbors, Marisol (Mariana Trevino) and Tommy (Manuel Garcia-Rulfo), and they begin to help redeem “A Man Called Otto.”

Back in 2015, writer-director Hannes Holm adapted Fredrik Backman’s novel, A Man Called Ove, a sad/happy tale of a man who once was lost but now is found. The result was a twice Oscar-nominated movie and the most popular film in Europe that year. The question I have is: why remake that wonderful film? I can only guess it is for the money, not the “art” of the story.

Tom Hanks reprises the role previously inhabited and deftly played by Swedish actor Rolf Lassgard. Hanks is a wonderful actor but I expected more from him here. I think that may be because the remake seems unnecessary and a bit of hazy redundancy and, besides, Lassgard owns the character. Sure, Hanks can play the curmudgeon but I do not see the benefit of starring in a remake of a better film.

Otto, at loose ends in life without Sonja and his job to look forward to, takes on the task of unofficial Neighborhood Watch in the private community. Unfortunately, he is not needed and thoughts of suicide dominate his life. With every attempt, he flashes back to different parts of his life, unveiling the reasons for his suicidal sadness.

Enter Marisol, Tommy and their two young daughters, Luna (Christiana Montoya) and Abbie (Alessandra Perez), and it is like a ray of sunshine, like it or not, in Otto’s drab and lonely existence. There are also the neighbors he has come to ignore as he stews in his own bitter sadness. Of the cast of characters around Otto, only Mariana Trevino, as Marisol, has any depth or dimension and the actor makes you feel her happiness and exuberance – and the catalyst for Otto’s expected transformation.