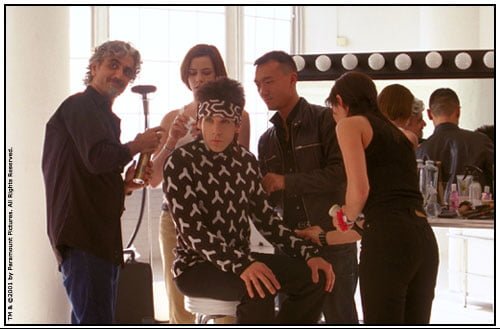 Evil fashion designers, bent on taking over the world, are planning to assassinate the Prime Minister of Malaysia for trying to rid his country of the sweatshops and child labor violations that have made the greedy moguls billions. Their chief toady, superstar designer Mugatu (Will Ferrel), is ordered to find an unwitting killer to perform the heinous task and he selects the world’s most famous male supermodel, Derek Zoolander (Ben Stiller), brainwashes him for the mission and sets the plot in motion. But, will Derek use his really, really good looks for the cause of bad guys? Find out for yourself with “Zoolander.”

Derek Zoolander (Ben Stiller, "Meet the Parents") has been the Male Model of the year for three year's running with his patented "Blue Steel" look. When the extreme sports, New Age Hansel (Owen Wilson, "Meet the Parents") takes his title in year four, Zoolander decides that 'there's more to life than just being really, really good looking, and I plan on finding out what it is.' Meanwhile, an evil fashion conglomerate determined to keep their pocket-gouging profits intact needs an assassin to rub out the prime minister of Malaysia in order to keep its foreign child labor pool stitching away. Hot designer Mugatu (Will Ferrell, "Jay and Silent Bob Strike Back") is tasked with luring Derek back into the fashion world and programming him to kill in "Zoolander."

Cross the colorful pop silliness of spy spoof "Austin Powers" with the dimwitted, albeit good-hearted, vanity of "Clueless'" central character and birth is given to cowriter/director Ben Stiller's "Zoolander." While not as witty as the latter, Jane Austen-inspired film, "Zoolander" has enough inspired goofiness to maintain a consistent giggle fit.

After establishing the dominance of Zoolander in the fashion world, Stiller batters his creation's self esteem. His loss of Male Model of the Year (in a year when Fabio wins the 'slashie' for model/actor) is followed by an unflattering Time Magazine cover feature by Matilda (Stiller's wife Christine Taylor, "The Brady Bunch Movie"). Then, when his three male model roommates attempt to cheer him up with a mini-road trip, they perish in a 'freak gasoline fight accident.' The now-lone inhabitant of a four-way bunk bed decides to head for home (in matching bone snakeskin suit and wardrobe bag) to work with his father (Jon Voight) and brothers in the coal mines of New Jersey, but he's rebuffed for his former, unmanly profession.

Mugatu, who's never used Zoolander in one of his campaigns before, appeals to his vanity by asking him to be the spokesmodel for his new 'Derelicte' line (inspired by the homeless). Whisked away to a hidden inner-city day spa by the Russian S&M clad Katinka (Milla Jovovich, "The Fifth Element"), Zoolander's brainwashed. Luckily, regretful Time reporter Matilda, attempting to make amends, begins to smell a rat.

Writers Stiller, John Hamburg ("Meet the Parents") and Drake Sather ("The MTV Movie Awards") hang juvenile humor (Derek's roomies communicate with a string of 'Earth to's) and spot on parodies (the personality profiles of Zoolander and Hansel at the awards ceremony) on a recycled plot they wisely realize doesn't matter. Director Stiller weaves the written silliness with visual jokes and highlights the whole affair with celebrity cameos that come at the audience every few minutes. Zoolander's brainwashing scene utilizes retro pop-art and music video imagery to its best effect while his 'walk-off' with Hansel, a split-screen, gun-slinging parody set to Michael Jackson's 'Beat It' is the film's comic highlight. Inventive production design by Robin Standefer ("The Caveman's Valentine") climaxes with Hansel's 'all things exotic and New Age' mishmash of a loft space including a 'dirt room' where Matilda's treated to a menage a trois. Costume design by David C. Robinson ("Pollock") is a mixture of the made-up outrageous (Mugatu's garbage-inspired 'Derelicte' line) with the already outrageous.

Stiller combines a 'sucking-in-cheeks' zoned-out look with exaggerated poses, while Wilson's more natural as the scooter-riding High Times cover boy. Amazingly, Taylor makes her straight-woman role work while Jovovich gets laughs from her femme fatale makeup design. Stiller's dad Jerry gets some Catskill-style yuks as Zoolander's manager Maury Ballstein. The only disappointment is the usually reliable Will Ferrell who only gets laughs from his Klaus Nomi hairstyle. Hair also gets laughs when we're introduced to Zoolander's dad, Jon Voight, and brothers (Vince Vaughn is one) who sport the same, dark brushcut as their model relative. The style shows up again on David Duchovny, an informant hand model.

Ben Stiller, with “MTV Movie Awards” writer/producer Drake Sather, spawned their character Derek Zoolander in a short comedy skit that spoofed the 1996 VH1/Vogue Fashion Awards. They then developed this thin concept into a feature length screenplay with John Hamburg (“Meet the Parents”) to tell the story of the intellectually-challenged, high-cheek-bone-blessed male supermodel whose worldwide popularity is being challenged by the newest young modeling Turk, Hansel (Owen Wilson).

When the three-time Male Model of the Year loses out to the newcomer in this year’s contest, the despondent Derek Zoolander goes back to the coal mining town of his youth only to be rebuffed by his disappointed dad (Jon Voight) who loathes his son’s girly-man career. The younger Zoolander heads back to the Big Apple where Time Magazine reporter Matilda Jeffries dogs the heels of the befuddled model for a story. Meanwhile, fashion maven Mugatu offers Derek a plum job modeling his new fashion line, Derelicte, based on the clothes of the homeless. Zoolander attends Mugatu’s Day Spa to be pampered and massaged, only to be brainwashed into becoming an unwitting assassin.

While Derek is undergoing his unknowing metamorphosis to become an international killer he also has to contend with his rivalry with the new number one supermodel, Hansel. Derek challenges his younger, fresher opponent to a walk off – a one-on-one fashion show where each man tries to out do the other under the judging eyes of David Bowie. The challenge looks to be a draw until Hansel, literally, pulls a trick right out of his pants to cement his position as numero uno male model. But, the mutual ordeal of the challenge causes both men to drop their guard and Hansel declares his respect and admiration for Derek. The two join forces with Matilda to put a stop to the murderous scheme to control the world.

The collaborative script does a brilliant job in fleshing out the sparse source material from its 5-minute concept piece into a fast-paced international intrigue spoof that jabs at both the ridiculous and the sublime. The undercurrent storyline – evil fashion tycoons bent on world domination who will stop at nothing, even murder, to maintain their strangle hold on third world child labor – is both serious and silly. Derek’s change from empty-headed fashion shill with his patented “looks” – Blue Steel, Ferrari and his yet to be publicized Magnum, which all look exactly the same – into an international superhero is great good humor. The action all comes to a head during the climactic Derelicte fashion show finale.

Comedy acting by Stiller and Owen is goofy fun as the pair barely has one complete mind between them. Stiller delivers his lines in a breathy voice that reminded me of a bit by Woody Allen in his also goofy comedy, “Sleeper,” where that also brainwashed comedian win’s a beauty contest and accepts his tribute with the same breathy intonation. Wilson spoofs the moves of a model with good-natured goofiness and is a good sidekick, too. Christine Taylor (real life wife of Stiller) plays the straight man for the over-the-top cast and anchors the rest with a bit of reality in this unreal world. Milla Jovovich is outrageous as Mugatu’s Russian henchlady, Katinka, who is repulsed by any over-the-counter department store clothing. Jerry Stiller, Ben’s father, puts his own spin on his character, Maury Ballstein, Derek’s long time agent and proprietor of Ball’s Models. Will Ferrel gets to chew scenery as the mean-spirited, arrogant Mugatu. The comedy cast is joined by a plethora of cameo appearances that include Fabio, Cuba Gooding Jr., David Duchovny, Bowie, Winona Ryder, Voight, Vince Vaughn, Billy Zane and many more.

The production values used to capture the hyper-stylism of the fashion world are dead on. The costumes, by David C. Robinson, are often outrageous and always imaginative, from Derek’s snakeskin suit (with matching luggage) to Mugatu’s self-advertising designs (even I got the pun being made at the expense of designer Lacroix). Production design, by Robin Standefer, captures the highly stylized fashion world with trendy nightclubs and gorgeous, expensive Soho lofts. Mugatu’s spa is a mass of metal and angles, while Hansel’s cavernous home has a “Soil Room,” with a floor made entirely of earth where the laid back model retreats for periods of meditation (and, occasionally, for down and dirty carnal activities). Camera work, by veteran commercial and music vid maker Barry Peterson, is perfect for the hyper kinetic fashion world.

“Zoolander” is goofy fun that doesn’t take itself seriously, but strives to amuse the audience with intelligently conceived and executed combo of satirical wit and slapstick that hits nearly every target it aims for. It also advances the concept that models are people, too, and need love just like you and me. With the dearth of decent films we have faced for so many months it’s a treat and a pleasure to get some honest-to-God laughs that don’t just involve toilet humor or fart jokes.