Ziggy Stardust and the Spiders From Mars 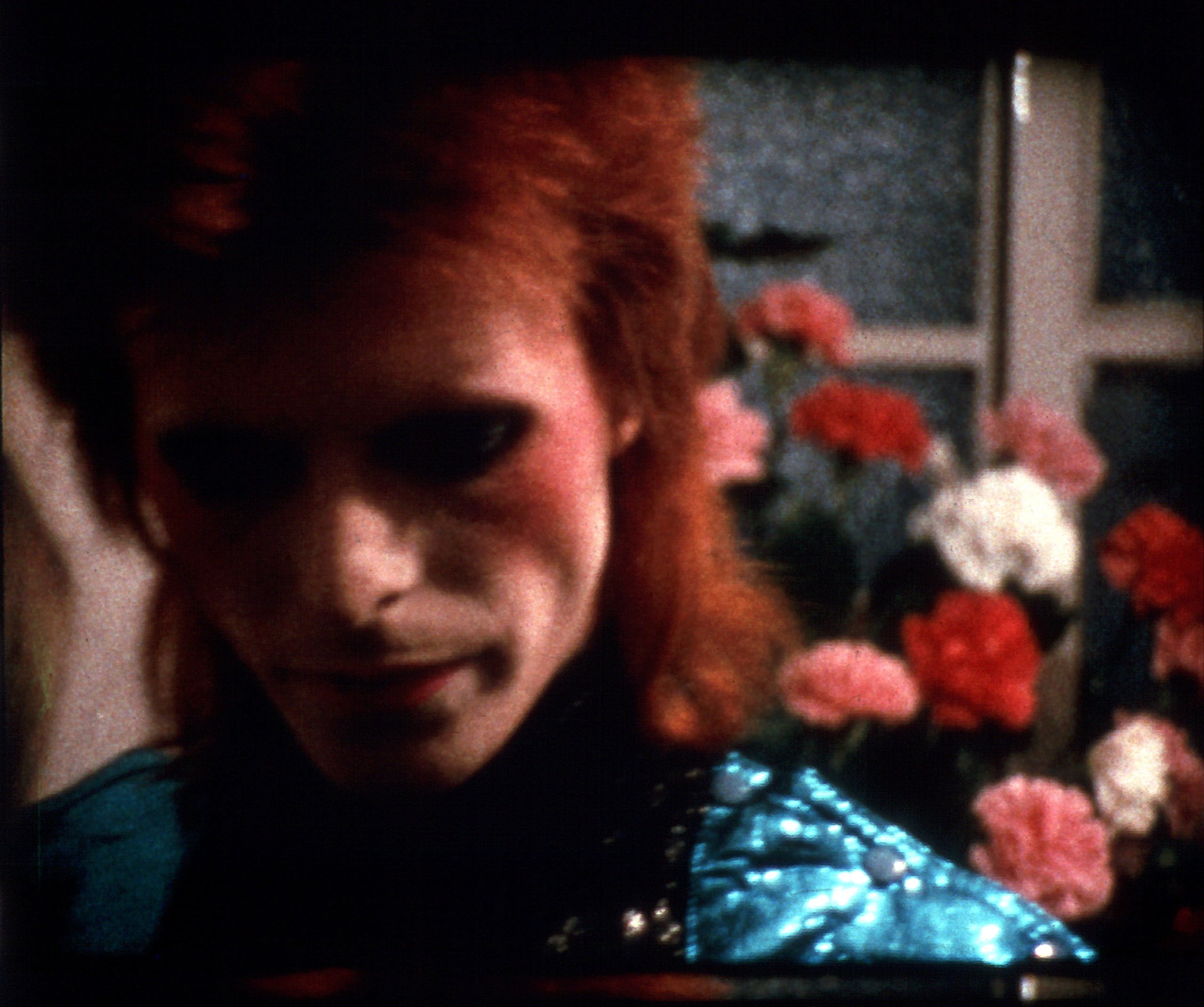 On July 3, 1973, androgynous glam-rocker David Bowie surprised his fans and his band with the pronouncement that this would be his final show. Of course Bowie performed again, but never as "Ziggy Stardust and the Spiders from Mars."

Documentarian D. A. Pennebaker ("Don't Look Back") was at the Hammersmith Odeon in London those last two nights to make a 30 minute series special. Once made privy to Bowie's surprise, however, he decided to shoot a feature film on the fly. While the rough and tumble nature of this hastily planned shoot shows, it is still an amazing document of a rock icon in his early days and one of the first concert films.

We find Bowie backstage, attempting to decipher a contract at the age of 26. "This is written in code" says the man who will become one of rock's saviest businessmen and Internet Service Provider. Angela Bowie makes a playful visit, appearing thoroughly out of place in retrospect. Later, Bowie relaxes with buddy Ringo Starr.

Bowie's guitarist Mick Ronson, who died in 1993, acts here like the forerunner of "Kiss," a heavy metal god before his time. Pennebaker captures Ronson with the now-trademark angled below the guitar shot. It's clear why Bowie chose this moment in time to split off from Ronson, who was not prepared to transform his style, but Ronson's contributions are obvious in Pennebaker's film.

This thirtieth anniversary reissue of the legendary last "Ziggy Stardust" performance has been restored with remastered on Dolby Digital Surround 5.1, mixed by Bowie producer ("Low," "Heroes") Tony Visconti. While we can revel in the recreation of "Ziggy Stardust," "All the Young Dudes," "Space Oddity" and "Suffragette City," what truly awes in the realization of Bowie's completely mature command of both his voice and the stage so early in his career.

"Ziggy Stardust and the Spiders from Mars: The Movie" suggests influences on the show from Marlene Dietrich (whom Bowie would later star with in "Just a Gigolo") to Pinocchio, while the show itself is clearly a forerunner to "Rocky Horror."

"Ziggy Stardust and the Spiders From Mars" is the digitally remastered feature film of the last concert and final performance of David Bowie as his gender-bender, crazy-clad alter ego, Ziggy Stardust, in 1973. Documentary and music feature creator D.A. Pennebaker produced one of the early rock concert films and captures an event that even the band was not aware of - the end of Ziggy.

The film starts with behind-the scenes footage as the performer prepares for, what is for him, business as usual. He is surrounded by his staff as they carefully coif, costume and make up Bowie into his other persona before your eyes. The entertainer comes across as cool, confident and totally comfortable about lending his body to Ziggy. The music that ensues is a chronicle of the genius output by Bowie. Before the maestro begins his performance, composer Wendy Carlos gives a rendition of Beethoven's "Ninth Symphony." What follows the classical opener is classic, too, as we get a great selection of many of Bowies early tunes.

"Space Oddity," "Suffragette City," "Rock 'N' Roll Suicide," "Changes," "Time," "All the Young Dudes," "Ziggy Stardust" are just some of the Bowie-penned songs, along with other's like Lou Reeds "White Light/White Heat" and the Jagger/Richards tune, "Let's Spend the Night Together." It's a tour de force concert, which, now, is just the tip of the iceberg of the work of the multitalented David Bowie (nee David Robert Jones).

The Spiders From Mars, the guys backing up Bowie, is made up by legendary rock guitarist Mick Ronson (who some consider the father of heavy metal guitar music), Trevor Boulder and Woody Woodmansey. This was their final performance as a band, though the late Ronson did reunite with Bowie in the early 90's for a cover of the classic Cream song, "I Feel Free." The artist died shortly thereafter. The band is every bit as capable at their craft as their leader and they do a splendid job in backing up the boss.

The opening and closing sequences of the film take us back stage and gives us a look at Bowie's first wife, Angela, before he dumped her for supermodel Iman, and a brief interlude between Bowie and his good friend Ringo Starr. There is not a lot of excess baggage to "Ziggy Stardust and the Spiders From Mars" as Bowie gets down to the music. The film documentation suffers from the technology of the day as director Pennebaker makes do with the existing light and frequently red costuming, which tends to bleed even in the re-mastered form. There is some, actually frequent, out of focus shots but I think the day's techs and the attempt to shoot really close up are the reason. (See Tim Pope's "The Cure In Orange" as an example of how a concert film should be shot.)

Even the non-Bowie fans - although, with the incredible body of work the man has generated, from rock classics to his brilliant narration of Peter and the Wolf (with the Philadelphia Orchestra) to some pretty remarkable film performances to his reading over the wonderful animation, "The Snow Man," I can't imagine anyone not a fan to some degree - will be entertained with this finale perf as the alien-like Ziggy. I don't think the theatrical release will garner big bucks, but it will be very popular on the after market market.