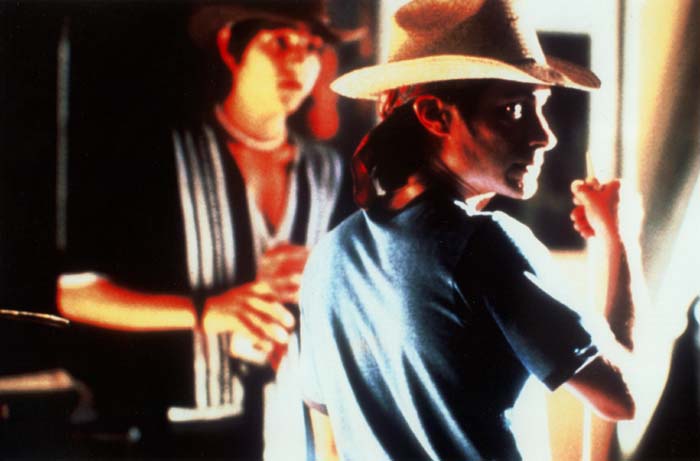 When their girlfriends jet off to Italy for a post-graduation holiday, best buddies Tenoch (Diego Luna, "Before Night Falls") and Julio (Gael Garcia Bernal, "Amores Perros") fight boredom by getting high with stoner friend Saba (Andres Almeida) and trying to score chicks. When the two lotharios invite Tenoch's older cousin's wife, Luisa (Maribel Verdu, "Belle Epoque"), on a trip to an imaginary beach, she surprises them by accepting in "Y Tu Mama Tambien."

Director Alfonso Cuaron ("The Little Princess") wanted to go back to his native Mexico to make a film, so he and his brother Carlos ("Love in the Time of Hysteria") wrote a distinctly un-Hollywood teen road movie that stops along the way to make observations on the state of their country. "Y Tu Mama Tambien" is a refreshingly natural look at two boys on the verge of becoming men who are helped over the threshold by a woman whose motto is 'Life is like the surf, so give yourself away like the sea.'

When the two try to chat up Luisa at a family wedding, she tells them she'd like to go to the beach, so they make up 'Heaven's Mouth' and invite her there, never expecting anything to come of it. Days later, after a doctor's visit and a drunken phone call from her husband, confessing to another in a long line of infidelities, Luisa calls Tenoch to see if she can still go along. The unusual threesome quickly bond when Tenoch and Julio explain Saba's concept of the Charolastra, an astral cowboy, with clubby rules that include not cheating with a friend's girlfriend and whacking off as often as possible. Their frank talk about sex becomes action when Luisa sleeps first with Tenoch, then Julio. The boys jealousies cause them to lash out at each other and admit to breaking the cardinal Charolastra rule, but Luisa gains the upper hand, and, amazingly, they find 'Heaven's Mouth' and the ultimate, unguarded paradise.

While the Cuarons' script is bawdy and often funny, they employ an unusual device to make political commentary by excluding all sound except the voice of narrator Daniel Giminez Cacho ("Love In the Time of Hysteria"). He makes his first appearance as the boys, driving around Mexico City, pass an accident scene. They barely notice, but the audience is told the tragic tale of an illegal immigrant bricklayer who was killed by a speeding bus. He tells us what Tenoch's friends never know - that he's witnessing the poor country town of his nanny for the first time - and looks into the depressing future of Chuy (Silverio Palacios), the delightful peasant whose family gives the trio an all-inclusive beach tour on his fishing boat.

Luna and Bernal are perfect as attractive boys from opposite social strata who, while mostly decent, frequently act like complete jerks. But the film belongs to the marvelous Verdu, a sexy slip of an earth mother who mourns her tragedies in private and embraces life in public. It's a touching performance.

The film is beautifully photographed by Cuaron regular Emmanuel Lubezki ("Sleepy Hollow") with handheld camera close up to the actors when it's not underwater or gazing at the passing landscape. The film's palette is largely aqua, with water prominent throughout, quenching the roadside heat.

"Y Tu Mama Tambien" wraps with a depressing coda which shows the former friends separated by their class and, ironically, their unifying experience. In finding themselves, creator Cuaron has given us a veiled glimpse of a country struggling into a modern age.