You Can Count On Me 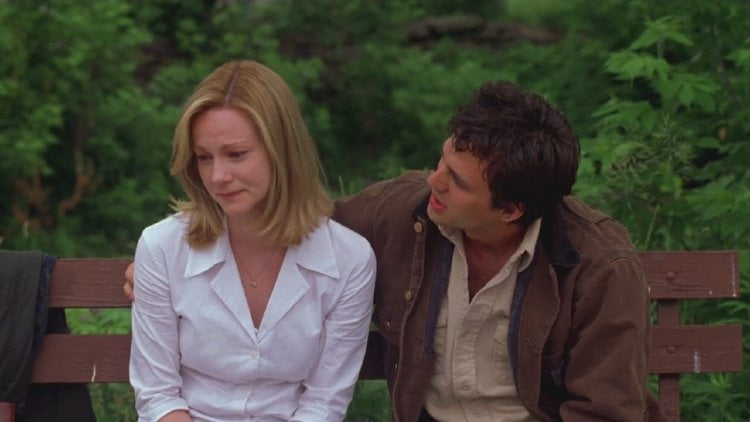 Single, small town mom Sammy Prescott (Laura Linney, "The Truman Show") is delighted to receive a letter from her younger brother Terry (Mark Ruffalo, "Committed"), who's returning for a visit after some long term, aimless travelling. Tempers immediately flare, however, when Sammy learns Terry's girlfriend is pregnant and he needs money. The complex relationship of these orphanned siblings is explored in writer/director Ken Lonergan's Sundance Grand Jury and Waldo Salt screenwriting awards winner, "You Can Count on Me."

Writer/director Ken Lonergan establishes his screenwriting abilities while making a tentative directorial debut with "You Can Count on Me." While his fine cast keep the audience involved in their unique yet recognizable situtations, Lonergan's film is visually flat.

Sammy has clearly assumed the mother role in her relationship with Terry, who acts the needy and irresponsible child. (Her own child, Rudy (Rory Culkin), is overprotected.) Sammy's in a jam at her job as Scottsville's bank loan officer. Her new ramrod straight boss Brian (Matthew Broderick) demands that she discontinue her practice of taking fifteen minutes of her lunch hour in midafternoon to pick up Rudy from school. Terry steps in and begins to fill a big need, providing the male interaction and law loosening Rudy's been craving. In fact, Terry empowers Sammy to begin to act irresponsibly as she slips into an affair with her married boss while turning down her long-standing boyfriend Bob's (Jon Tenney) proposal of marriage.

The cast is terrific and true. Linney and Ruffalo, who bear no physical resemblance whatsover, are emotionally on target as soulfully close siblings who judge each other harshly. Matthew Broderick takes his "Election" cheating spouse and adds endearingly geeky quirks to hilarious and frustrating effect (he's so uptight he bans employees from setting their computer monitors background colors). Jon Tenney plays the small town honest guy with a maturity issue recognizably while Rory Culkin acquits himself well. Lonergan gives himself a cameo as the local priest whom Sammy calls upon to 'help' Terry.

Lonergan's writing here is far superior to his more commercial work in "Analyze This," only ringing false in one scene where Sammy gives Terry an uncharacteristic public scolding in a local restaurant. His portrait of a small, upstate New York town, where trailer dwellers mix with owners of sprawling colonial homesteads at the local pool hall is beautifully rendered, almost seeming frozen in time. Unfortunately, the camera (cinematography by Stephen Kazmierski, "The Myth of Fingerprints") is too static, giving all interior scenes the feel of actors in a square frame.

"You Can Count on Me" is a small, regional feeling film which offers us several rich character studies.

Sammy and Terry Prescott (Laura Linney and Mark Ruffalo) were orphaned as kids when their mother and father were killed in a car accident. Since then, the siblings have drifted apart. Sammy put down roots in the small, upstate New York town of Scottsville with her young son Rudy (Rory Culkin). Terry is a troubled wanderer who ekes out an existence and not much more. When he abruptly leaves his pregnant girlfriend, he heads for Scottsville and his sister to borrow some money. Terry's arrival disrupts Sammy's quiet, stable life in tyro director Kenneth Lonergan's "You Can Count On Me."

Terry's unexpected arrival in Scottsville coincides with Sammy getting a new boss at the bank where she works. Brian Everett (Matthew Broderick) is a martinet, of sorts, whose first actions are to restrict the colors his employees use on their computer screens and put a halt to Sammy's work day excursions to pick up Rudy at school and ferry him to his sitter's home. Sammy protests Brian's decision to no avail. "You'll have to make other arrangements," he says, or else. With no other option, the distraught mother calls upon Terry to fill in for her with the daily pickup.

The temporary solution to the problem goes bad from the start when Terry forgets to pick up Rudy at school one time and takes him to a bar to play pool another. When Sammy finds out about the pool game from the town sheriff and confronts Terry with the fact, he immediately blames innocent Rudy for tattling on him. The relationship between Sammy and Terry begins to change from that of sister and brother to one of scolding mother and petulant, troublesome son. Terry and Rudy draw closer together, too, at this time. As expected, by the end of the movie, everyone loves everyone and a hopeful finale ensues.

While the brother/sister conflict boils, Sammy and Brian get into an adversarial battle between the boss man's penchant for bureaucratic BS and Sammy's desire to have the workplace be happy and cooperative. The fight soon changes as Sammy and Brian get to know and like each other. His unhappy marriage and her uncommitted situation drive the pair into each other's arms and a romance begins. Of course, a boss/worker relationship is destined to disaster and this one is no exception.

"You Can Count On Me" is straightforward story-telling about what happens to a brother and sister as they grow older and apart. Laura Linney has not had the opportunity to get the lead for a movie, until now, and holds up her end of the bargain pretty well. Mark Ruffalo is OK as the brooding, selfish, nomadic Terry and shows the most personal change by the film's end. Unfortunately, Linney and Ruffalo look as much like siblings as Gore and Bush look like brothers. This is a notable distraction. Matthew Broderick is fine as the anal retentive bureaucratic boss. Rory Culkin is nondescript as Sammy's little boy.

Kenneth Lonergan makes a sound debut effort, showing an ability to tell a story while getting convincing performances out of the principle cast, if not so the supporting players. Tech credits, like the directing and writing, get the job done, though nothing about the film knocks my socks off.

Hollywood doesn't usually make films about brothers and sisters and I can understand why. Who would want to watch a story about me bickering with my sister? I wouldn't.