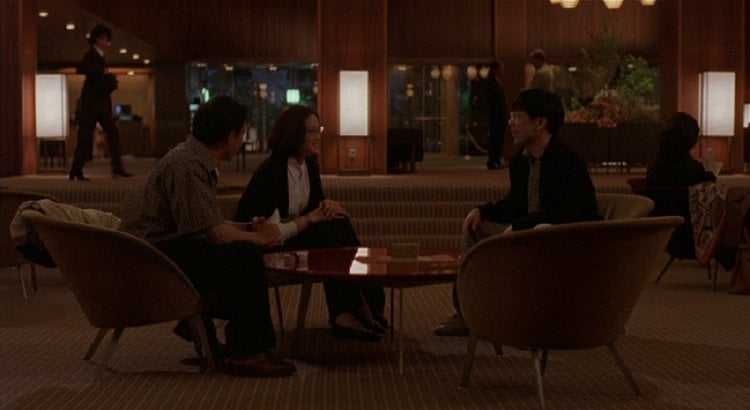 Winner of the Best Director award at this year's Cannes Film Festival, "Yi Yi (A One and a Two)" is a broad, philosophical look at modern life in Taiwan. NJ (Nien-Jen Wu, writer/director of "A Borrowed Life") is a middle aged father of two who's facing a crisis at his electronics firm and the unsettling appearance of an old flame (Su-Yun Ko) while his wife Min Min (Elaine Jin, "A Brighter Summer Day") suffers a breakdown. His teenage daughter Ting Ting (Kelly Lee) is involved in a love triangle complicated by musical competition with her best friend. Eight year old Yang Yang (Jonathan Chang) has an unrequited crush and a budding passion for photography. NJ's live-in mother-in-law (Ru-Yun Tang) is dying and his brother-in-law Ah Di (Hsi-Sheng Chen) is still being pursued by his old girfriend even though he's newly married to an expectant bride.

Writer/director Edward Yang's ("A Brighter Summer Day") "Yi Yi" is one of the year 2000's most satisfying films on many levels. The story, while playing like a soap opera on the surface, is chock full of wry human observations while showing great affection for its characters. Technically, the film is striking in every aspect.

Nien-Jen Wu gives a note perfect performance as the beleaguered NJ. With little dialogue, Wu is always sympathetic as his character provides an anchor for the confused adults who orbit around him. NJ himself is only able to turn to Ota (Issey Ogata), the Japanese businessman NJ wishes to partner with. Ota looks like the makings of a long time friend and provides much needed advice cloaked in metaphor. The other anchor in "Yi Yi" is the dying grandmother, another character of few words. Min Min believes her life is empty after realizing that she tells her mother the same things daily and it 'only takes a minute' while Ting Ting obsesses over the drama in her life. In the film's opening scene, Ah Di's old girlfriend 'apologizes' to the grandmother at the wedding reception hall for not marrying her son. Young Yang Yang waits for the film's closing funeral to speak his oddly mature and though-proking piece.

Every woman in the film has her moment of hysterics except for grandma and the moody, melancholy Ting Ting, who is at the receiving end of her best friend's condemnation for seeing her boyfriend, Fatty (Pang Chang Yu). Sherry, NJ's former fiance now married for the third time to an American in Chicago, arranges to meet him on a business trip to Tokyo obviously hoping to resume the relationship only to spend the weekend haranguing him for abandoning her all those years ago. Most of the film's gentle humor comes via Yang Yang whether he's arriving home drenched and unnoticed or patiently explaining to his uncle Ah Di that he's taken pictures of the backs of peoples' heads as a service because they can't seem them themselves.

Yang and his cinematographer Wei-han Yang have created a bold color design which shifts from reds (Ah Di's wedding), to yellows (Ting Ting's first love) and blues (NJ's Tokyo interlude) before finally giving over to black and white (grandmother's funeral). Characters are framed in storefronts, by pillars, trees and doorways and reflected upon by the outside world. The film's editor, Bo-Wen Chen, expertly cuts among all the interweaving plot threads, never more beautifully than when Sherry describes her and NJ's first date as Ting Ting repeats the action in another time zone. Kai-Li Peng's score subtly creates mood.

While not every character's story line is as compelling as the others, such is the way of life, and life is celebrated in all its glories, tragedies, foolishness and profundity in "Yi Yi."

NJ Jian (Wu Nienjen) is at a mid-life crossroads but doesn't know it. His family suffers through one crisis after another and his business, prosperous only a year ago, is on the brink of bankruptcy. He is beginning to question the direction his life has taken when he has a chance encounter with Sherry (Ke Suyun), his first love and the girl he left behind, without a word, decades ago. But, this is just the beginning of the stories of the people who populate the family drama from Taiwan, director Edward Yang's "Yi-Yi."

The "normal" problems of NJ's existence are further complicated on the day (a fortuitous one according to the almanac) his debt-ridden brother-in-law, A-Di (Chen Xisheng), gets married to the very pregnant Xiao Yan (Xiao Shushen). The wedding, a raucous affair, is disrupted with the appearance of Yun-Yun (Zeng Xinyi), A-Di's jilted girlfriend. NJ and his wife, Min-Min (Elaine Jin), are suddenly called away from the reception when they learn that Min-Min's mother collapsed and was rushed to the hospital.

Grandma (Tang Ruyun) is sent home, in a coma, to be cared for by her family. Although it is unlikely that she will recover, the doctor encourages the other family members to talk to the unconscious grandmother because, maybe, she can hear them. Min-Min can't take the strain as she comes to realize that her life is wasted - "I tell grandma about my day and it only takes a minute," she bemoans as she runs off to seek the guidance of her spiritual teacher, the Master. Her children, Ting-Ting (Kelly Lee) and Yang-Yang (Jonathan Chang), also have problems talking to the silent grandma. Ting-Ting blames herself for grandma's mishap, while Yang-Yang refuses to talk to his grandmother at all.

Meanwhile, NJ is trying to save his stagnant company and it is suggested that he and his partners team up with a brilliant Japanese games designer, Ota (Issey Ogata). NJ is chosen to wine and dine the innovator and a fast friendship develops between the two men. But, the plans they make are soon subverted by NJ's partners who make a deal with a Taiwan tycoon, Boss Huang, and opt to use pirated software rather than the quality product that Ota can provide.

While all this is going on, Ting-Ting begins a romance with Fatty after he tells her he is no longer dating Lili (Adrian Lin), Ting-Ting's new neighbor and friend. Eight year old Yang-Yang gets in trouble at school and has no one to turn to with mom in the mountains and dad trying to save his business. Little Yang-Yang also harbors a crush on a pretty classmate who swims. A-Di's investment manager has gone broke and fled the country, leaving the luckless A-Di with nothing. Yun-Yun still feels she has control over A-Di and crashes the couple's baby shower. Xiao Yan later finds A-Di unconscious in a gas filled bathroom. Is it by accident or by design?

NJ, thinking the deal with Ota is genuine, heads to Tokyo for more discussion and, coincidentally, to meet Sherry. His jilted lover still carries a torch for the handsome, taciturn NJ, but he tells her, during a private interlude, that he does not have those feelings anymore. He left her, decades before, because he could not tell her, then, that she and her mother were stifling him and forcing him down a path not wanted. Ongoing, also, are the underhanded dealings of NJ's partners as Boss Huang forms an "alliance" with the sexy owner of the knock off company and drives NJ's business further down. On the home front, Ting-Ting is summoned from school and learns that Fatty has attacked and brutally murdered a tutor who has been having an affair with Fatty's old lover, Lili, and her mother.

There is even more going on in this epic-scoped soap opera of the life of an extended family than what I have already described. The complex story, written by helmer Yang, is a rich mining of the emotions, needs and desires of normal people. Far from creating larger-than-life beings whose problems are loftier than those for us mere mortals, the world of "Yi-Yi" teams with average folk with very human flaws. At the center is NJ, a quiet, intelligent man who is comfortable in his reserve. He learned, early in his life, to go after what he wanted, not what was expected of him. As his family faces their own crises, NJ, from the time he spent with the deep-thinking Ota, relearns the lessons of life, once again taking matters into his own hands.

With NJ as the anchor of "Yi-Yi" (English title is "A One and a Two"), the rest of the players are given free reign on their individual tales of love, sadness, pain and pleasure. Some stories, like NJ and Ota and NJ and Sherry, are more compelling than the others, but they are all intriguing in their own way. This is one of those rare films, with a run-time of 173 minutes, which you beg to continue when the credits start to roll. Edward Yang ties things up nicely at the end, but his storytelling is so masterful that you want to see what happens next in this elegant family drama.

Capitalizing on the rich screenplay is the textured, beautifully composed photography by Yang Weihan who frames every shot like a gorgeous photograph. Helmer Yang uses the extended, near silent photography to allow us to linger on the images up on the screen. It's almost like a leisurely stroll in an art gallery to gander at the works of a master. The languid pace afforded the wonderful cinematography pads the running time considerably, but is such a visual pleasure you don't notice the time. The visual impact of the film is key to its overall high quality. Of course, production design, costume, the brilliant use of colors to change the films mood and the rest of the techs all contribute to this superior work.

The vast ensemble cast revolves around Wu Nienjen as NJ. The screenwriter turned actor/director plays the strong, silent type here, but a man with a great deal of emotion and feeling under his inscrutable surface. The terrific cast around him is too numerous to catalogue, but they all give solid performances right down to little Yang-Yang, whose final speech over grandma's casket tells it all. From the mouths of babes?.

"Yi-Yi" is a true universal film that has appeal across cultural and racial boundaries as it tells its stories of the day-to-day lives and plights of normal people in normal, and sometimes not-so-normal, times as they cope with life's difficulties, both large and small.