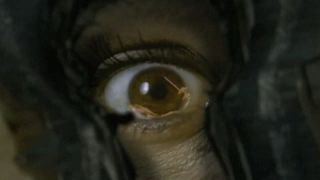 When Chris Finn (Desmond Harrington, "Ghost Ship) gets stuck in traffic on the way to an important job interview in Raleigh, he tries a back road advertising a gas station to cut around the congestion. He encounters a group of campers, stranded by the barbed wire stretched across the road which deflated their tires, and soon they all discover they've taken more than a "Wrong Turn."

Director Rob Schmidt ("Crime and Punishment in Suburbia") and screenwriter Alan B. McElroy ("Ballistic: Ecks vs. Sever") start off on the right foot by delivering what appears to be an homage to "The Texas Chainsaw Massacre" set in the locale of "The Blair Witch Project," both apt material for times when terrorists with motives incomprehensible to most take innocent lives in commonplace situations with sudden finality. Unfortunately, once the protagonists realize the horrific situation they're in "Wrong Turn" turns into just another empty genre flick, albeit one with high production values.

When Chris crashes his vintage Mustang into the SUV that appears unexpectedly in the middle of the road, he's effectively wiped out the group's second mode of transportation - third even, as he's also crushed the bicycle mounted on the back of the other vehicle. We quickly learn that couples Carly (Emmanuelle Chriqui, "On the Line") and Scott (Jeremy Sisto, "Angel Eyes") and Francine (Lindy Booth, "American Psycho 2") and Evan (Kevin Zegers, proving there is life after starring in the "Air Bud" movies) are soothing buddy Jessie's (Eliza Dushku, "City by the Sea") broken heart with a camping trip, and Chris neatly completes the coupling. Four set off down the road, leaving Evan and Francine to do the things kids do before being slaughtered.

Chris informs the group that the gas station will be no help, having stopped there and spoken to the unhelpful, filthy proprietor (Wayne Robson), who like the drunk at the cemetery in "Saw," muttered a prophetic warning after Chris had left. The foursome do find a backwoods shack with all of "Chainsaw's" warning signs - abandoned vehicles strewn about the yard, hillbilly objects d'art hanging on the porch, a generator chuffing away and multiple refrigerators storing human remains. Of course they're trapped by the return of this film's cannibal trio Three Finger (Julian Richings, "The Claim"), Saw Tooth (Garry Robbins, "Narc") and One Eye (Ted Clark) and hide only to witness the butchering of Francine. This scene, while not as horrific as its counterpart in "Chainsaw," very effectively delivers the gory goods. The rest of the film is a chase where the lesser known actors get killed and the stars stick around for the climatic showdown. And of course, those believed dead, as they often do, pop up again for a closing credit coda.

The biggest problem with "Wrong Turn" is that it fails to build its own mythology. The opening credits, right out of "Blair Witch," give us horrific pictures of human deformity and screaming headlines about countless missing in the West Virginia woods, but no one ever mentions the area's notoriety (the film's initial scene shows a pair of climbers getting knocked off by an unseen entity) and the cannibals themselves are nothing more than relentless hunters.

Makeup and special effects wiz Stan Winston ("Jurassic Park"), also acting as producer here, disappoints with his cannibals, although other gore effects are well done. Overall the production values are top notch for the genre with production design by Alicia Keywan ("Bride of Chucky"), art direction by Elis Y. Lam ("Undercover Brother") and set decoration by Zeljka Alosinac ("The Ladies Man") all contributing to a creepy effect. Cinematographer John S. Bartley ("Eight-Legged Freaks") does a good job with nighttime photography and cramped spaces. Costume by Georgina Yarhi aspires to nothing more than showing off the nubile bodies of the actresses.

There's an odd contingent of Canadian talent involved in "Wrong Turn" with one ghoul having worked twice with Sarah Polley and multiple actors from "The Red Green Show," including nephew Wayne (Joel Harris) as a doomed trooper.

"Wrong Turn" is a pretty decent effort for its genre, but disappoints considering its initial promise.