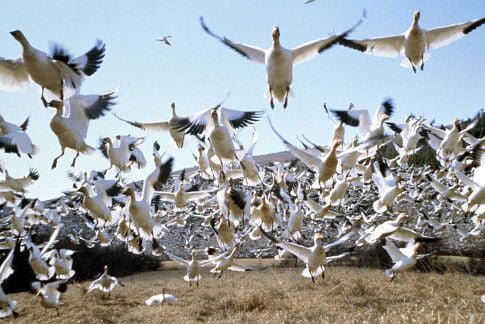 In 1996 French filmmaker Jacques Perrin produced the technically marvelous look at the insect world in the meadows and ponds of Aveyron, France in "Microcosmos." Now, Perrin, with five camera teams and as many as 14 cinematographers, travels the earth following the migratory paths of a vast array of fowl and give us a genuine bird's eye view of the world in "Winged Migration."

This Oscar nominated documentary is a superior technical and artistic achievement in cinematography and one of the most riveting and beautiful nature films ever made. Given a literal bird's eye view, we soar above the earth at heights that scream special effect (none were used) or glide along close enough to an avian companion to see its individual feathers ruffle in the wind.

Perrin begins in the French countryside where he will follow migrations across the globe heading for seasonal food supplies before making the trek back when nature demands. Perrin throws statistics at us via subtitle, identifying species and the distances they traditionally travel (with a tern that actually flies 12,000 miles from the Arctic to Antarctica) accompanied by his flat commentary. But its not the numbers we're hear to marvel at.

The bird's very design for its environment is cause for consideration as we watch a water bird flatten its webbed feet out vertically for landing. A crested species' mating dance is performed with the synchroneity of pairs skaters. The sheer volume of a flock that appears in the distance like a dense, swirling, black, shape-shifting cloud is awe-inspiring, as is a shot of geese fill the sky with the density of Escher's famous drawing. The striations and colors of Monument Valley are reflected in the pattern of birds' belly feathers, and as they fly above it, they're mirrored in water which apes the sky they inhabit.

Have you considered the survival of birds which must cross oceans? Perrin finds a gray military vessel in a choppy sea where exhausted birds stop to rest (this scene and much of the chorale like music and swooping overhead shots recall the British animation "The Snowman"). Distance isn't the only hardship, as we witness a shore bird with a damaged wing surrounded by, then encompassed by crabs. A water fowl is waylaid by a polluted puddle in an Eastern European industrial facility. Penguins are distracted by a predator as its partner sneaks in from the rear and steals their chick. (The director notably cuts away from any gore, instead suggesting the aftermath.)

Perrin slightly weakens his film's impact by adding drama, such as his editing of an avalanche to suggest we've been standing with the birds in its path or his shot of a caged rainforest parrot making its escape that would have required the collusion of the poacher (which also begs the question - do parrots migrate?). Still, one can only admire the man's mastery when he returns to where he began and takes our breath away with an astonishing shot of a songbird hopping towards us through a dense thicket.

"Winged Migration" is an enforced stop to smell the roses, a filmic poem about the majesty that surrounds us every day.

Perrin and his crew have succeeded in giving us a real, often astounding, up close and personal view of all kinds of migratory birds and the obstacles they face every spring and fall as they traverse vast distances just to survive. The list of birds that we, literally, fly with is lengthy with such marvelous species as Whooper Swans, Red-crowned Cranes, Snow Geese, Puffins and the Arctic Terns (which migrate an astounding 12,500 miles from Antarctica to the Arctic, twice a year).

Between the film's narration, charmingly and articulately provided by Perrin, and the titles that tell us the name of each kind of bird being followed and how far they travel in their journeys of survival and procreation, we get an 85-minute lesson in ornithology. The tutorial is sweetened by the incredible feats in flying with the sometimes vast migratory flocks and photographing them as they traverse oceans, mountains, canyons, glaciers, cities, oasis and desert in driving rain, blizzards and relentless sun in their search for food and nesting grounds.

The film is proudly titled, in the beginning, that no special effects were used in the production of "Winged Migration," which makes the project all the more astounding. At first, Perrin's cameramen put themselves in gliders, balloons and specially equipped helicopters. But, the three-year production allowed the filmmakers to utilize new technology and some of the most spectacular footage is shot from video cameras mounted on remote-controlled gliders and helicopters and a specially designed aircraft called the Ultra Light Motorized craft that gives a 360-degree perspective.

"Winged Migration" is not just made up of majestic photography as the camera gives us the birds' view of the earth. It also shows the trials and harsh conditions these creatures face as they make their compass-perfect journeys of thousands of miles. We are also observers in the mating and feeding rituals - a wonderfully amusing water dance by a group of Clarke's Grebes is, alone, nearly worth the price of admission. We also see the creatures' heartbreak when mating pair of penguins unsuccessfully try to protect their baby from a couple of persistent scavenging gulls. But, the violence of Mother Nature is kept subdued, making "Winged Migration" true family entertainment.

Music is used, with various degrees of success, to give the film an auditory flow. The lofty sounds of a large chorale are used to lend certain sequences a majestic quality, but the accompanying music works best when it uses an organic beat that fits the moment, like the subtle percussion over the images of the dancing Grebes.

I couldn't help reminiscing, while watching Perrin's work, about the well made, educating feature documentaries that Walt Disney Pictures used to make in the 50's and 60's like "White Wilderness" and "The Vanishing Prairie." "Winged Migration" is a superb addition to that pantheon of nature documentaries and deserves acclaim for the stunning cinematography, artistry and technical achievement.