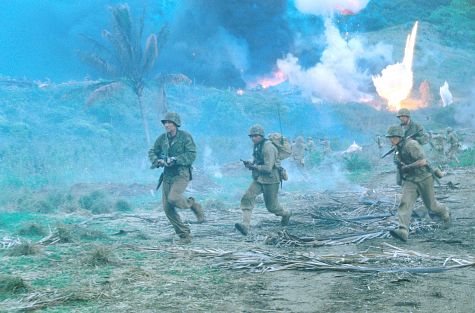 In the first months of the fight for the South Pacific during World War II the Japanese successfully broke every code the Americans possessed, slowing the advance of Allied forces. Several hundred Navajo Americans were recruited into the Marine Corps and trained in the use of a super secret code based on their native language. When sent into battle, each code talker was assigned a bodyguard whose order were "to protect the code at all costs" and we follow two such men in John Woo's "Windtalkers."

In 1942 hundreds of American Navajos were recruited to outwit Japanese code breakers by transmitting in a new cipher based on their native language. Marines were assigned to protect these men for two reasons - some U.S. soldiers mistook the Navajos for the Japanese enemy and the code they carried was precious cargo. Two vastly different men, Sergeant Joe Enders (Nicolas Cage) and Ox Anderson (Christian Slater), shepherd Ben Yahzee (Adam Beach, "Smoke Signals") and Charlie Whitehorse (Roger Willie) through the Battle of Saipan in director John Woo's "Windtalkers."

Producers Alison Rosenzweig and Tracie Graham made a unique discovery with the little known tale of the Navajo code talkers, but as they developed the film, bringing on board stylish action director John Woo and his former Oscar winning star Nicolas Cage, the code talking nucleus got lost under a barrage of war film cliches.

Joe Enders is tortured by survivor's guilt after following orders caused him to lose his men on the Solomon Islands. A kindly nurse (Francis O'Connor, "The Importance of Being Earnest") becomes inexplicably attracted to the despondent man and helps him rejoin the war by tricking an ear doctor during a hearing exam. Screenwriters John Rice and Joe Batteer instill early fear in the audience by inviting comparison to "Pearl Harbor," where Kate Beckinsdale helped Ben Affleck through an eye exam.

The Navajo code is almost completely dismissed after Ben and Charlie's friendly competition is displayed by them both answering an instructor's question in class (we learn a tank becomes a tortoise in Navajo). They're greeted by their unit in Hawaii with about as much enthusiasm as the two black soldiers in "Hart's War," although Ox tries to integrate them into a poker game. Ox tries to engage Joe in a conversation about the ramifications of their orders to 'protect the code at any cost,' but Joe's agenda appears to be all about joining his lost men.

Rice and Batteer ("Blown Away") succeed in gradually developing a friendship between Enders and Yahzee based on Yahzee's spiritual understanding of Enders's haunting and Enders' admiration for Yahzee's soldiering, although they cheat in two big ways when Enders must face following his orders. While the effectiveness of the code is shown, most spectacularly when used to redirect friendly fire, the focus is put on the coordinates sent rather than the language used to relay them. They fill out their squad with a group of one-dimensional WWII issue soldiers. Chick (Noah Emmerich, "Frequency") is the bigot who will have his eyes opened. Pappas (Mark Ruffalo, "You Can Count On Me") is the second generation Greek who relates more to his heritage and family run business than this crazy war. Harrigan (Brian Van Holt, "Black Hawk Down") is the flamethrower who gives chocolate to kids. Nellie (Martin Henderson) worries about his wife back home and tries to give Pappas his wedding band 'should anything happen to him.' Squad leader Hjelmstad (Peter Stormare, "Chocolat") is a Scandinavian immigrant whose accent is jarring.

Cage gets the tortured heroic act down, but there's little else to the character. Adam Beach seems overwhelmed in this big commercial film, making large emotional shifts unconvincingly. He does get Yahzee's naivety across, though, and slips a "Smoke Signals'" fried bread joke in. More convincing is non actor Roger Willie who gives Charlie Whitehorse a calm center. Slater, who admittedly has an easier role than Cage, is a natural as the kindly liberal who bonds with Whitehorse through music.

Woo effectively shows the horrors of war, but the constant explosions lose their impact over time. With no gun doubling up and Cage resisting the urge to turn into Travolta, "Windtalkers" is the least identifiable of Woo's films (despite a church drawn in salt and some pelicans subbing for doves).

The resurrection of the WWII movie which began with "Saving Private Ryan" is on its last legs. While "Windtalkers" is technically sound (those CGI fighter planes notwithstanding), I'm beginning to react to the "Combat" formula with nothing but apathy.

Marine Sergeant Joe Enders has had a troubled time. He followed his orders to the letter during the fight for Guadalcanal and all it got him were 15 dead men, his whole unit, and severe injuries from a grenade. Tormented by the loss of his men, Joe, with the help of pretty, sweet Nurse Rita (Frances O'Connor), gets assigned back to active duty and takes the job of protector for code talker, Pvt. Ben Yahzee (Adam Beach, "Smoke Signals"). The tragedy of Enders' previous command makes him keep his ward at arm's length and not allow himself to know the man during the murderous battle for Saipan. He struggles, throughout the story, with the meaning of his orders - if he can't protect his code talker, can he take the final, drastic step necessary to protect the code?

Nicolas Cage gives Joe Enders a sullen, haunted air that softens only a little as Joe gets to know and like Ben. It is a two-dimensional character mainly because of the nature of the film that has the big draw of explosive action, not acting. Adam Beach is thoroughly likable as Ben Yahzee, a happily married guy who has a little boy named George Washington Yahzee. It is obvious to Ben that Joe is an extremely troubled man and works hard to break down the barriers his bodyguard has built up between them. When Ben gets his first taste of blood in battle, the young actor is almost scary in his passion. Ben and Joe are two good characters but, unfortunately, are buried under the action.

There is an echo, in "Windtalkers," of the patriotic war movies of the 40's, usually starring John Wayne and an eclectic cast of characters from all walks of American life. Woo attempts to revisit the idea of the melting pot Marine outfit and has some limited success. There's Chick (Noah Emmerich) a burly, bigoted Texan who has a chip on his shoulder about the Indian, Ben, in his squad. Of course, in a fashion true to such films as "The Sands of Iwo Jima," Chick learns to eventually respect and admire his Native American brother-at-arms. Pappas (Mark Ruffalo) is a second-generation Greek immigrant who hyperventilates at the height of battle but is a darn good Marine despite his fears. Harrigan (Brian Van Holt) is a former Florida surfer dude who traded his board for a deadly flamethrower. Scared, inexperienced Nellie (Martin Henderson) can't keep his young wife out of his mind. Finally, there is Gunny Hjelmstad (Peter Stormare) as the veteran squad leader who harkens from Scandinavia (though Stormare's accent is a mystery). But with action the key word to "Windtalkers," the acting and character development of these men takes a back seat.

Action is the name of the game in any John Woo film and the director finally has enough bombs and bullets to satisfy his penchant for mayhem. He captures the confusion, violence and the utter savagery of combat and pulls zero punches in putting you, the viewer, in the midst of the chaos of battle. Woo uses some computer-generated images of fighter plane attacks and battleship bombardments, but the scope of his huge battle scenes is impressive with as many as 700 extras used. The helmer, with cinematographer Jeffrey Kimball, shoots the battles in a fast-moving, fluid manner (with as many as 14 cameras) that reminds me of such Lewis Milestone films as "All Quiet On the Western Front" and "Pork Chop Hill." There is nothing static about "Windtalker" and the rest of the techs are equal to the imposing task of recreating the look and feel of the Battle of Saipan.

Don't go looking for a human face being given to the Marines' Japanese opponents. It's kill or be killed and there is no time for delving into any moral questions - except for the one that is the film's theme. Unfortunately, the moral dilemma that Joe must face and cope with is not delved into as deeply as it could/should be as writers John Rice and Joe Batteer create a story that is grand in its depiction of war. There is a flow to the tale that couples the daily grind of the mud Marines and a pretty fair history lesson of the Saipan campaign. There should have been more character development to bring the lives of the men to heart, but that would probably have meant a reduction in the bombastic battle scenes, something I doubt that Woo would give up. It may have made "Windtalker" a better film, though.

War film fans, history buffs, followers of John Woo and the action faction out there will enjoy "Windtalker." The soul of the story is never given a chance to emerge and, as such, I was never drawn into the lives of the men. It is a finely crafted work and a good but not great film.