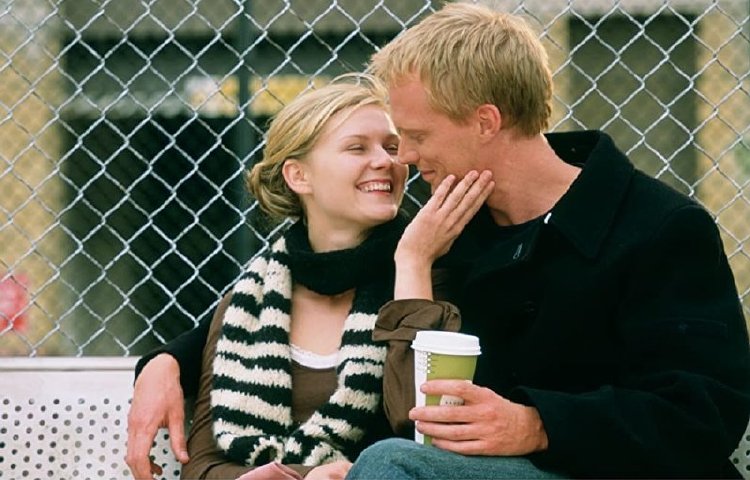 Peter Colt (Paul Bettany, "Master and Commander: The Far Side of the World") was once ranked 11th in professional men's tennis, but now, ranked 119th, is looking at retiring from the circuit and taking a pro job at an English resort. Peter's plans are upended when a wildcard draw and American tennis sensation Lizzie Bradbury (Kirsten Dunst, "Spider-Man 2") score him an unlikely love connection and a shot at winning "Wimbledon."

Director Richard Loncraine (1995's "Richard III") serves up a passable romantic comedy that shines brighter than it should due to the thoroughly charismatic performance of its leading man. Paul Bettany, a replacement for a too old Hugh Grant, proved himself a romantic lead in the dramatic "The Heart of Me," but here he displays a light touch that cements his reputation as a versatile actor able to take on any role presented to him.

When Peter arrives at his London hotel, he's given the wrong room key and an eyeful of Lizzie in a glass-booth shower stall. The young American has a wild reputation and she engages Peter in some betting on the practice courts. She wins a fish and chips dinner, a bet that she calls in from her hotel room that night, much to Peter's delighted surprise. Lizzie's manager dad, Dennis Bradbury (Sam Neill, "Jurassic Park III"), tries to thwart the romance, convinced that men give his daughter a mushy first serve, but the passionate affair gives Peter a new confidence that propels him through more rounds than anyone would have expected. Soon, Peter's the talk of Wimbledon, but when Lizzie decides to refocus on her game, he cannot stay away. Mr. Bradbury's concerns prove grounded, straining the love match just as Peter faces the finals and the overpoweringly favored Jake Hammond (Austin Hammond, "The Day After Tomorrow") - an unchivalrous ex-lover of Lizzie's.

Kirsten Dunst is a fine young actress, but she's unevenly matched with Bettany and the film is, ironically, at its weakest when the two are onscreen together. Bettany comes across as believably love-befuddled, but Dunst exudes more of a cheeky younger sister aura which gives the romance a creepy undertone (imagine if Grant had played Peter - ewww!). Bettany, who constantly describes himself in interviews as the cheaper alternative to Jude Law, should be considered up front more often - unlike his pricier colleague, Bettany has never disappointed. The film is at its strongest when concentrating on Peter's game and the male tennis enclave and on his amusingly dysfunctional family, an uppercrust bunch with a penchant for low comedy. We're introduced to mom Augusta (Eleanor Bron, one Bettany's costars in "The Heart of Me") being accused of snogging another man in sight of dad, Edward (Bernard Hill, "The Lord of the Rings: Return of the King"), who is in the process of moving into a treehouse in the backyard as a result of the incident. Younger brother Carl (James McAvoy of "Bright Young Things" looking like Russell Crowe's younger brother), a bicyclist with a kickstand problem, lives off of Peter by wagering against him at the local Betting Office and picking up chicks in his reflected glory. Nikolaj Coster-Waldau ("Black Hawk Down") is engaging in his own right as Peter's best friend and opponent Dieter Prohl and Jon Favreau ("Elf") is hilarious as Peter's gauche fair weather agent. In smaller roles Robert Lindsay, Jonathan Timmins and Barry Jackson all make their mark as a hopeful hotel owner, a black-eyed ball boy and the veddy British Wimbledon men's attendant. John McEnroe is amusing (and more comfortable) playing himself against a stiffer Chris Evert as Wimbledon color pros.

"Wimbledon" is a breezy romantic sports comedy, but it is an uneven match. Still, two out of three ain't bad and it's a pleasure watching Bettany take center court.

Tennis pro Peter Colt (Paul Bettany) has seen better days as a player. Once ranked #11, he is now rated 119th in the world, which means there are 118 players that are younger, stronger and faster than he. But, he has played well enough to earn a wild card spot in the upcoming All-England Lawn Tennis Championship, better know to the rest of the world as “Wimbledon.”

Tennis is not one of the sports that come to mind when I think in terms of excitement and action. I, personally, find the game to be only marginally more interesting than watching a golf match – which is only slightly better than watching paint dry. But, Paul Bettany had peaked my interest since I first noted him, as Geoffrey Chaucer, in “A Knight’s Tale, then in A Beautiful Mind” and “Master and Commander.” He showed his acting chops in all of these, and other, films but I was curious to see if he could anchor a romance/comedy/rags-to-riches story.

Wimbledon” is only a fair sports flick, but it does affirm my thoughts that Bettany is an acting force to be reckoned with. As I watched the film, I thought about how Hugh Grant in the role of Peter – especially since the producers are credited with “Four Weddings and a Funeral” and “Notting Hill.” I found out later that Grant was actually the first choice for the Peter Colt role (a bit too old to play a tennis pro trying to make a comeback). Paul Bettany has the same self-effacing temperament as Grant and I found his droll wit to be a plus in the role of Colt.

Kirsten Dunst gives an assured performance as rising young American tennis star Lizzie Bradbury. While I like the romance between Peter and Lizzie, I wasn’t bowled over by the chemistry between the two. Dunst has obviously worked hard to get the tennis moves down and does a good job with the physical aspect of her talented, athletic rich kid character.

Supporting cast helps to flesh things out a goodly bit. Veteran thesps Bernard Hill and Eleanor Bron, as Peter’s father and mother, put an amusing spin on their characters as they are shown growing farther and farther apart, only to be brought back together because of their son’s game. James McAvoy gets good mileage as Carl, Peter’s ne’er do well younger brother who keeps betting against his older sibling for the duration of the Wimbledon matches. Sam Neil is only OK as Lizzie’s protective and surprisingly tolerant dad. Jon Favreau gets some hilarious moments as Peter’s fast-talking, sleazy American sports agent, Ron Roth. John McEnroe and Chris Evert have a good time as the Wimbledon broadcast commentators.

As I said, I’m not a big tennis fan, unless you count my fondness for Alfred Hitchcock’s “Strangers on a Train.” The liberal use of CGI during the matches helps to give a believable look to the games that blends with the live action.

Helmer Richard Loncraine, who is previously known for his modern take on Shakespeare’s “Richard III” starring Ian McKellan in the title role, works well enough with the romantic sport/romance script by Adam Brooks, Jennifer Flackett and Mark Levin. While the story holds few surprises on or off the court, it is well-paced tale that intersperses tennis match with the budding love match. The wrap up ties all the loose ends together into a neat bow but the and-they-all-live-happily-ever-after smacks of cliché and lack of imagination. The real draw, for me, is seeing Paul Bettany fill the romantic comedy shoe that Hugh Grant has long grown out of.