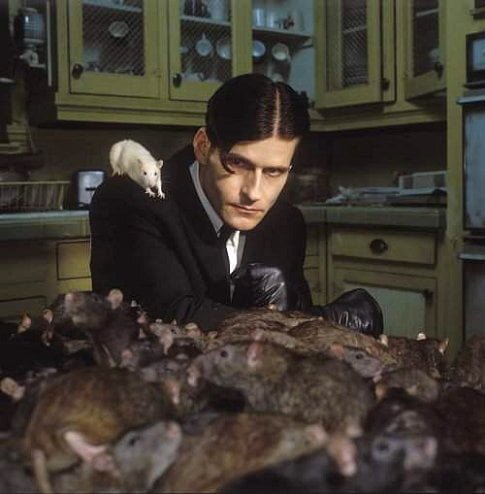 Willard Stiles (Crispin Glover) lives in the rundown family manse with his bedridden mother (Jackie Burroughs). His father had sold the family business, just before he died a few years back, to his partner Frank Martin (R. Lee Ermy) with the proviso that his family will be provided for. But Frank hates the weak Willard and constantly badgers his old partner's son, making the younger man's life a living hell. Things are about to change for Willard, though, when he makes a very special friend named Socrates in "Willard."

"It's an awful name" his mother tells him, "from now on your name is Clark." This is just one more burden for the painfully awkward young man, verbally abused during the day by his deceased father's partner Mr. Martin (R. Lee Ermey, "Full Metal Jacket") before returning in the evening to his entombing, outdated home and the psychologically grasping, physically decaying woman who will no longer call him "Willard."

"Willard, there are rats in the cellar" says Mama Stiles (Jackie Burroughs, "Last Night") as the film's stop-motion opening credits segue to black. Crispin Glover ("Charlie's Angels"), looking like a Victorian clerk with center parted hair and old dark suit stiff and shiny on his gaunt frame, ascends an old wooden staircase resignedly to listen to his mother's latest rant. Writer/director Glen Morgan and producer James Wong switch roles from their "Final Destination" collaboration to remake the 1971 film about a social misfit who bonded with rats adding heavy doses of Hitchcock's "Psycho" and "The Birds" to the mix. The latter homage works stylistically, but the "Psycho" influence is too strong. Morgan provides no background for the development of Henrietta Stiles's abusive, repressive behavior, especially when contrasted against the obvious loving memory Willard has of his dad (shown in family oils and photos as Bruce Davison, the original Willard).

Gordon works plenty of humor into Willard's initial forays to the local hardware store for pest repellents, aided by cinematographer Robert McLachlan's ("Final Destination") artful angles and composition. Willard is amazed to discover his mother is right (she claims to have smelled rats from the home's second floor), then flummoxed when the rats outwit his traps. When the sticky paper he tries next slows a fine white specimen down, Willard's heart melts and he rescues his new best friend Socrates. There are more where Socrates came from, and Willard discovers he can train an army of the creatures to advance, retreat and destroy. But trouble looms in Ben, a huge brown specimen ready to challenge Willard's authority when he doesn't receive Socrates's special treatment. Willard employs his rats to revenge his mistreatment at work, but the act sets a chain of escalating horror in motion and Willard's conflict with dominant Ben forces him to become like the rat he grows to hate.

The original "Willard" is perhaps most remembered for the Oscar winning Michael Jackson song named for its sequel, "Ben," which is coyly (and too cutely) reused in the new film. Morgan was astute to take a mediocre horror flick and attempt to explore new facets of it and the casting of Crispin Glover was positively inspired. Striking production values and a unique central characterization don't overcome the weakness of the original story, which just never really was compelling, but Glover, Morgan and his production team bring enough fresh twists to an old tale to maintain interest.

Mark Freeborn's ("See Spot Run") production design is a star of the film in its own right. The Stiles's home is one of those once stately homes which have fallen into disrepair and preserve a way of life several decades past. The Martin-Stiles manufacturing office is also dingy and dated, attributable to the miserly ways of the firm's surviving partner. The animal trainers and effects crew also get high marks as hundreds of real rats (sometimes enhanced and only rarely replaced with CGI, most spectacularly for a scene which mimics "The Shining's" torrent of blood unleased from an elevator) always hit their marks.

Glover makes Willard far more interesting than his predecessor did. The actor appears almost handsome initially, a softness about his eyes expressing his communion with his creature Socrates or his fearful inward shrinking from society. As events bring out a diabolical streak in Willard, he seems more angular and more ratlike in his movements. His best scene is a frustrated outburst at his mother's wake, unexpected and hilarious. Although her character isn't given sufficient background motivation, Jackie Burroughs delivers wonderful creep as Willard's invasive mother. She's a withered invalid who can maintain a death grip on her walker and her horrifyingly intimate questions about Willard's private matters are both funny and offputting. R. Lee Ermey delivers his stock shrieking villain in a part with little room for shading while Laura Elena Harring ("Mulholland Drive") gives a nice air of quiet caring to a sympathetic office worker.

"Willard" is a weird little movie handled with a disproportionate care that makes it oddly worthwhile.

I had a couple of reactions when I first saw the movie posters for "Willard" show up a while back in the theaters. I had seen the original 1971 version, starring a very young Bruce Davison, about 30 years ago and was not impressed. It was an okay gross-outer but not a movie that I would bother to catch again. I questioned the remaking of Gilbert Ralston's original script (from his novel) as adapted by director Glen Morgan - why bother? I thought.

Then, there was my other reaction: what a perfect choice in casting just the right actor in the role of a dysfunctional character whose best friend is a rat. Crispin Glover has always had a propensity for playing weird, often dark and troubled people from "The River's Edge" to"Bartleby" to the Thin Man in "Charlie's Angels." When I saw that strange face staring out at me from the poster I thought there might be some hope for the all-new "Willard."

Well, it turns out that this is a mixed bag of a film. Walking out of the theater, I still asked the question: why? Aside from the creep factor of thousands of rats swarming across the screen doing mayhem there is little draw to the story by Ralston. But, helmer Morgan, Glover and a very talented behind-the-camera team raise "Willard" a cut above the original.

Glover brings the right kind of rat-like quality to the role - it makes me wonder if his over-length front teeth are prosthetic or real - as well as the necessary sniveling, whining and pleading quality that has become the insecure Willard's trademark after years of his mother and his boss constantly berating him. The only shred of hope he has is in the company of a little rat he names Socrates that he found in the basement of his old house. The critter is extremely smart and immediately develops an affinity to the lonely Willard and a friendship is made. But, there is extra baggage involved as a few thousand of Socrates' rodent friends also take refuge in the Stiles household. One of them, a really, really big rat that Willard dubs Big Ben, vies for control of the house. Willard doesn't recognize the challenge and a war of the minds ensues.

There is also the story of Willard and his nemesis Frank Martin. Once Mrs. Stiles passes on to a better life, Frank knows that any agreements with Willard's father are suddenly dissolved. He taunts the downtrodden Willard with harassments that end in his termination. Then Martin rubs salt into Willard's wounds with the offer to buy the Stiles home, the only thing that Willard has left. Now, with a couple of thousand rats under his control, Willard decides to take revenge on the despicable Martin. You can guess what that means.

The production, led by Glen Morgan, helps to make "Willard" a better film than it should be. The creepy Stiles house and Martin's offices are nicely rendered by Mark S. Freeborn's production design. Special effects - making 500 rats seem like thousands - are wonderfully creepy and, at times, visually stunning. This is a rare event when the remake of a film readily surpasses the original. I couldn't/wouldn't recommend the first, but, for fans of schlock horror, I have to give the new "Willard" the praise it deserves, especially Crispin Glover.