Why Don’t You Just Die! 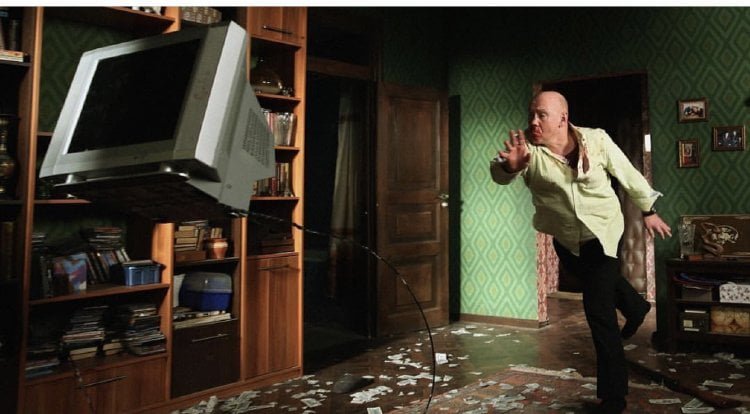 An intense young man with a blond buzz cut and green eyes wearing a Batman hoodie waits outside a Moscow apartment, an old hammer clutched behind his back. Clearly taken aback when a woman answers the door, Matvei (Aleksandr Kuznetsov) enters warily, invited to sit across from his intended target, Andrei Gennadievitch (Vitaliy Khaev), the father his girlfriend Olya (Maria de Medeiros lookalike Evgeniya Kregzhde) has asked him to kill in “Why Don’t You Just Die!”

Writer/director/editor Kirill Sokolov’s splashy debut revels in comedic violence that plays like a live action Itchy and Scratchy cartoon with production design (by Viktor Zudin) that seems to have inspired last year’s “Beanpole” (Sokolov’s film was made in 2018). It’s essentially a one gag movie with a few twists and flashbacks, but the filmmaker has an impressive command of his toolbox and it’s entertaining as hell.

Just after the bald-headed, boxer mugged, barrel-chested Andrei has sized up his daughter’s boyfriend, Matvei finds himself struggling to explain the hammer that’s just slipped out of his back pocket. Andrei excuses himself to get sugar and returns with a shotgun. In a balletic whirl of gore, a couch explodes with illicit cash, two heads are repeatedly bashed into hard objects and Matvei finds himself handcuffed in a bathtub so slippery with his own blood he can hardly stand. Andrei’s wife Tasha (Elena Shevchenko) wrings her hands and meekly suggests refreshments.

Before the day is done, there will be a debate as to whether Olya even knows Matvei, whether Andrei raped his daughter and whether Andrei caused the death of his best friend Evgenich’s (Mikhail Gorevoy, "The Hitman's Bodyguard") wife (a flashback reveals Evgenich, called upon to help, as Andrei’s corrupt cop partner). Olya’s arrival will set off a deadly chain of events which in turn will cause a neighbor’s noise complaint to bring two cops around.

Those with weak stomachs should be warned that “Why Don’t You Just Die!” is a literal bloodbath involving, among other things, a power drill. But Sokolov’s tone is pitched so over the top, laughs will be induced along with the squirms.

A young man, Matvey (Aleksandr Keuznetov), rings the doorbell of an apartment. Behind his back, he holds a hammer and has obvious murderous intent. An older man, a cop, Andrey (Vitally Khaev), answers the door and invites his visitor in. This, it turns out, is the politest moment in “Why Don’t You Just Die!”

Take an old Guy Richie film, like, say, the manic “Lock, Stock and Two Smoking Barrels,” and add a gory bloodfest and that might approximate what we get from first-time feature writer-director-editor Kiril Sokolov. Editing, in this premier work, is equally manic in its intensity and speed.

Okay, let me take a crack at it. The reason Matvey is at the door is because his girlfriend, Olya, told him that her father, Andrey, has been raping her since she was a child and she wants him dead, hence, the hammer behind the back. The invitation to come in takes Matvey by surprise and he reluctantly goes in and is introduced to Olya’s mother, Natasha.

The civilized behavior soon changes as Matvey confronts the cop about the alleged rapes, which Andrey vehemently and loudly denies and dismisses. Violence soon erupts and the body count of the tiny cast escalates. What is striking about the violence that permeates “Why Don’t You Just Die!” is the imaginative ways the filmmaker comes up with methods of mayhem. And, with a good sense of dark humor that bubbles up despite the violence and bloodshed.

The bloodfest that is integral to “Why Don’t You Just Die!” will likely turn off some of the more sensitive of us out there. But the sheer intensity of that bloodfest and the rapid fire black humor will amuse the more stoic-willed movie buff.