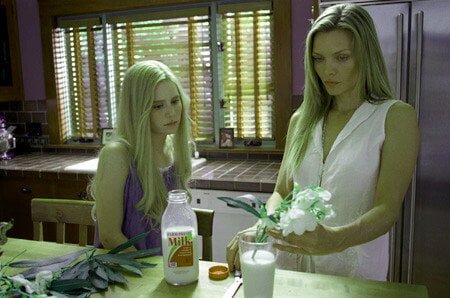 At the age of 15, Astrid (Alison Lohman) is thrust from the safety of her single mother's shadow to find herself as she tries on the substitute mothers of foster care. Astrid also learns a hard lesson - that the woman she felt safe with, Ingrid (Michelle Pfeiffer), can continue to be dangerous even after being imprisoned for killing her boyfriend with poisonous "White Oleander."

Janet Fitch's novel became a phenomenon after it became an Oprah book club choice, but the richly textured, densely characterized novel is given the Cliff Notes treatment by screenwriter Mary Agnes Donoghue ("Beaches"). The major points are made, but one's never given enough time to respond or know the characters to become emotionally involved.

We meet Ingrid when her daughter finds her sitting on the edge of a roof, insisting Astrid join her. We're given the hint of Ingrid playing hard to get, then capitulating to Barry (Billy Connolly, "Mrs. Brown," in a role that barely allows us to even see his face). Ingrid's dragged from her home by police, Astrid's picked up by children's services, then sees her mother sentenced to life in prison - whoa! What happened and how did it happen so fast? (We'll learn in flashbacks, but the transitions are unrealistic and the pre-prison mother-daughter relationship is mostly told via Lohman's clipped narration.)

First stop is born again, ex-stripper Starr (Robin Wright Penn) who takes in foster kids for the extra income and God points. Soon Astrid's dressing cheaply and sporting a crucifix, which mama mocks during a prison visit. Confused, Astrid listens to mother, and in so doing, unwittingly slides into a seduction of Ray (Cole Hauser, "Hart's War"). Starr's jealousy leads her back to the bottle, her makeshift family crumbling apart and Astrid is ejected in a surprising manner.

An interlude at a state run boarding school further toughens up Astrid. She chops off her hair with a knife and threatens the girl who jumped her with it. She also meets Paul Trout (Patrick Fugit, "Almost Famous"), an aspiring artist who offers love at a deeper level, but she's whisked way to another foster house before he becomes home. This time she finds another kind of love with Claire (Renee Zellweger), a lonely, out-of-work actress who becomes a best girlfriend. But Astrid turns out to be a Band-Aid for Claire's troubled marriage and shaky mental health and another tragedy ensues. Astrid finally gains her independence and finds her true self with Rena (Svetlana Efremova, "K-19: The Widowmaker"), a Russian in love with capitalism, even though she doesn't want what Rena offers.

Each stop exposes Astrid to not only a completely different lifestyle set against the varying landscapes of L.A., but to character traits she can pick and choose from as she attempts to shape herself. Costume and makeup nicely reflect the looks of the adult women back onto the impressionable teen, until she veers from Rena's wild style into a dark, bohemian goth look that's the opposite of her mother's pastel beauty. Art director Anthony Rivero Stabley creates distinct environs for each woman as well.

Each of the adult actresses paint their characters well, but only Pfeiffer and Zellweger are given enough time to show subtle inner psychologies, using more than broad strokes. Pfeiffer is perfectly cast as the cool beauty who loses it when her ego isn't fed by the men she claims to disdain. Pfeiffer makes the transition from flirt to determined killer to hardened jailbird believable, her initial delicacy gradually hardening into lean sinew, her feline grace held in check by shackles. Zellweger is all cheerful encouragement and zest for life until Astrid begins to question husband Mark's (Noah Wyle) frequent absences. Zellweger transitions into a fearful self-doubt we can tell she's visited before. (Pfeiffer's actually scary acting against Zellweger during a prison visit - she eviscerates the other character with laser beam eyes.)

Lohman adapts to the changes required of her, but the actress and director Peter Kosminsky never get the audience to break through the wall her character erects. Fugit makes for a strong, warm presence in the film. The final scene, repeated but extended from the opening, makes a concept which barely worked in the written word silly in its visualization. The score by Thomas Newman ("The Horse Whisperer") is comprised of a type of wistful piano playing that's been well overused.

"White Oleander" is a solid adaptation of terrific novel, but it doesn't get to a deep enough end of its ocean of pain.

Beautiful, cold, artistic Ingrid Magnussen (Michelle Pfeiffer) is not a woman to be taken lightly. When her boyfriend jilts her for another woman she sees no problem with murdering him. But, her decision to commit mayhem gets her 35 years to life and her teenaged daughter Astrid (Alison Lohman) is suddenly left in the care of the state in "White Oleander."

Janet Fitch's novel, on which the film is based, is an epic coming-of-age story that follows Astrid, after her mother's arrest and conviction, as she is shuffled from one foster home or institution to the next. It is a richly structured story with interesting, fully developed characters, especially Astrid, and had a broad appeal. Hell, a story about a teenage girl that I, a guy, raved about is an accomplished, appealing work.

"White Oleander," the movie, is akin to a Reader's Digest condensed version of the source material. Scripter Mary Agnes Donoghue does a fair job in capturing the characters that surround Astrid, from her mother to the first foster care giver, Starr (Robin Wright Penn), to the vulnerable, dependent Claire (Renee Zellweger) to the outrageous Rena (Svetlana Efremova) who runs a half-way house for teenaged girls. Donoghue covers each episode in a glossed over manner that gives the essence of each story chapter but does not delve too deeply into any of them.

The acting is uniformly solid from all the players that surround newcomer Lohman at the film's center. Michelle Pfeiffer embodies the brittle beauty of Ingrid, a woman who takes pleasure in hurting others, ostensibly to protect Astrid. Helmer Peter Kosminsky gets a manipulative perf from Pfeiffer that uses the actress's beauty, and her character's bitchiness, perfectly. Unfortunately, the dynamics of the relationship between Ingrid and Astrid so beautifully detailed in the book receives only surface treatment here. It is a fine, small performance by Pfeiffer.

Renee Zellweger best captures the vulnerability of Claire, an out of work actress in a troubled marriage who uses foster child Astrid as a shield to protect her from the loneliness in her life. Claire is a tragic figure and her sequence in the film best approximates the book. Robin Wright Penn gives just the right note as born-again floozy Starr, a former bimbo beauty who takes Astrid in but soon suspects her ward of having relations with live-in boyfriend Ray (Cole Hauser). Again, the sequence has a perfunctory feel that leaves out much of the books emotional layers. Svetlana Efremova, as money-grubbing Russian émigré Rena, has fun in her slight role.

Alison Lohman does an okay job as central figure Astrid but is more reactionary to the events around her than a participant. The pretty teen has the necessary good looks (although, she more resembles Wright Penn than Pfeiffer) and gives a fair perf first time out. The cursory adaptation of the story keeps Astrid at arm's length throughout most of the film, with one exception. Patrick Fugit, as Astrid's soul mate Paul Trout, reps the one un-presupposing figure in the film. He likes Astrid for what she is and makes no demands as he genuinely loves and cares for the girl. Fugit comes across more sympathetically than any of the other male characters, though all do their best to match their alter egos from the book.

Techs are sound and helmer Kosminsky moves his actors around with a sure hand, belying his limited directing experience (1992's "Wuthering Heights").

If I hadn't read and enjoyed Fitch's novel so much, I may have been a little less critical of "White Oleander." Still, it's an actor's film with the story told in a series of lightly drawn chapters. Like Reader's Digest, it tells the story but pushes the meat and emotion of Astrid's plight to the side.