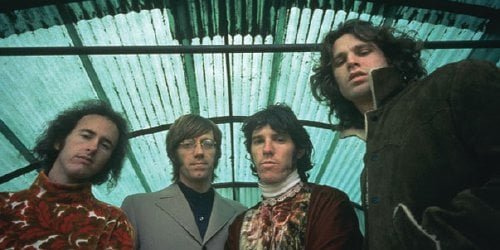 Filmmaker Don DiCillo scrutinizes the short life and times of one of rock music’s legendary bands and its lead singer, Jim Morrison. Utilizing copious footage from the 60’s and early 70’s of The Doors’s performances, archival documentary film of those tumultuous times and enacted dramatization, DiCillo takes us up close and personal to a the band’s great music, its players and an analysis of a life that ended in tragedy and far too soon and the band that made him a star “When You’re Strange.”

Writer/director Tom DiCillo ("Living in Oblivion") takes a dip into documentary to tell us just what The Doors mean to him in a project that's the film equivalent of a fanzine in "When You're Strange." The film isn't really about The Doors as much as it is about Jim Morrison aka The Lizard King as it opens with footage of the man racing to his death on the highway as news of his demise is reported on the radio and ends up with a dip in a natural pool as the third rock great to die at 27 is laid to rest. There is some amazing, never scene before footage of Jim with fans, The Doors behind the scenes, etc., but unfortunately DiCillo's writing is academic and painfully obvious, even to casual fans. Replacing his own narration with that of actor Johnny Depp apparently hasn't helped, as Depp's narration is uninspired, even tired. The film plays like a DVD extra and would have been vastly improved if the director had simply assembled his material in chronological order with occasional commentary from surviving band members Ray Manzarekm Robby Krieger and John Densmore. The music's great, though.

Jim Morrison’s inner light burned bright, hot and quick in the short and meteoric life of one of the trio of legends whose tragic deaths rocked rock music – Morrison, Joplin and Hendrix, all of whom died at age 27. Writer/director DiCillo does a decent job in telling The Door’s story, with its focus on Morrison, but all of the band members – John Densmore, Robby Krieger and Ray Manzarek – get their due. The Doors could and did get along without their lead singer but the band, in their heyday, formed a real collaborative effort in creating their incredible music.

DiCillo mixes the biography of The Doors with events of their days, from Vietnam to the assassinations of Martin Luther King and Bobby Kennedy and the Kent State killings, to give an American context to the material. There are some ragged moments of the fuzzy focus in the structure of “When You’re Strange” but the copious list of original Doors songs are a treat for an old hippy like me