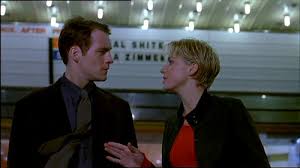 Straight arrow Brendan (Peter McDonald, "The Opportunists") is a school teacher who visits his local pub after choir practice where he meets Trudy (Flora Montgomery). She tells him she's a Montessori teacher and gets him to sing a hymn. But Brendan will do more than sing for his supper once he discovers Trudy's true profession in "When Brendan Met Trudy."

We first meet Brendan lying in a rain filled gutter, recreating the drowning scene that opens "Sunset Boulevard." Brendan's a film buff and writer Roddy Doyle ("The Snapper," "The Commitments") peppers his film with constant movie references. We flash back to the titular meeting before catching up with that opener about two thirds into the film, when Brendan's life has spun out of control due to the wild ways of Trudy, who's a professional thief. Brendan hates Trudy's friends. Trudy hates Brendan's family, particularly his witchy sister. In order to win Trudy back after the gutter incident, he has to agree to accompany Trudy to rob his sister's house and do unmentionable things to her living room carpet.

"When Brendan Met Trudy" is a terribly uneven film which doesn't roar into life until its final thirty minutes. Brendan and Trudy never seem like a couple. They'd probably hate each other in the real world. While McDonald gives an appealing performance, Flora Montgomery is a bit too forced, like the film itself. Essentially, it's a boy-meets-girl, boy-loses-girl story by way of the 'is my significant other a psychopath?' films such as "So I Married an Axe Murderer." Its charms are to be found in the flourishes. Brendan's imaginative film fantasies find him exitting a frame a la John Wayne in "The Searchers." Trudy's influence morphs his hymn singing into the most outrageous cover ever of Iggy Pop's "The Passenger." His all boy class starts getting assignments like "Jane Austen loved a good laugh - discuss with reference to 'Persuasion.'" Brendan's headmaster, who we're fooled into thinking is about to fire him, turns out to be a sympathetic eccentric who fully appreciates making a fool of oneself for the love of a woman.

Director Kieron J. Walsh does well with the whimsy, yet allows his 95 minute flim to drag in its first hour. "When Brendan Met Trudy" never quite attains the frothy heights it's aiming for.

Brendan (Peter McDonald) is a Dublin high school teacher that loves music and movies, but hates teaching. When an extraordinary young woman named Trudy (Flora Montgomery) enters his life, he soon learns that there is more to living than Bogart and Brahms in "When Brendan Met Trudy."

The movie begins a la "Sunset Boulevard" with a body lying motionless in the gutter and a voice over explaining how he, Brendan, could arrive at such a nadir of life. As the story unfolds and more film references are mentioned and shown, we begin to understand that our hero is a tormented individual who is in desperate need of a change. His profession, teaching history and English at a Dublin high school, is unfulfilling, to say the least, and he seeks solace in his movies and his passion for song. This changes when Trudy enters the picture.

Trudy, Brendan learns, is a professional burglar and he, at first, is energized by the excitement of her crimes. Things are looking up for the teacher until he makes a big mistake and introduces his new girlfriend to his family, especially Nuala (Pauline McLynn), the sister from hell. Brendan succumbs to family pressure and, soon after, he and Trudy are no longer an item. This is when he ends up in the gutter, shown in the beginning of the film, pretending to have been hit by a car in a vain cry for sympathy from Trudy. It takes an act of selfless bravery, later, by Brendan to impress Trudy and she agrees to take him back - if he helps her rob Nuala's home. The excitement of the deed drives Brendan to an even grander criminal plan - steal all of the hated computers from his school. But, things go awry and Trudy ends up in jail, shielding Brendan from arrest.

When Trudy is sentenced to two years in prison, Brendan mopes around, guilt-ridden and lonely over his loss of love. Even the heroes in his movies, his only comfort in the past, seem to mock him for letting the love of his life take the rap for him. He musters the courage to visit Trudy in prison and finds she has forgiven him. He unabashedly breaks out in a song that is both joy and redemption.

"When Brendan Met Trudy" is a nice idea for a film, but is less than it could be in the hands of first time feature director Kieron J. Walsh. The helmer hales from advertising and TV and it shows in the two-dimensional nature of the story and its protagonists. The tale focuses on Brendan and his passion for film and music is an integral part of his makeup. Peter McDonald doesn't take us far below the surface of the feckless Brendan, but the offbeat love story, music and film references are entertaining.

Flora Montgomery has the harder role as the self-assured, criminally minded Trudy. Her toughness opposite Brendan's milquetoast character is supposed to be a turning of the tables with the couple reversing conventional roles of tough guy, subservient gal. Trudy is too bubbly to come across as a tough-as-nails thief, but Montgomery does her best to breathe life into her role.

There is little going on to distract the viewer from the central story. Wacky and weird family members make up the background, but they, too, fail to come across as real people, though Brendan's speak-her-mind mom (Marie Mullen) gets some shock value out of her foul-mouthed judgements.

"When Brendan Met Trudy" tries to be a romantic comedy with the leads reversing conventional roles. There isn't a firm enough hand behind the camera to control the bland script by Roddy Doyle. As such, it moves along OK and has some kitschy film references with snippets of such classics as "The Quiet Man," "Africa Queen," "The Producers" and more but fails to satisfy the film buff in me.