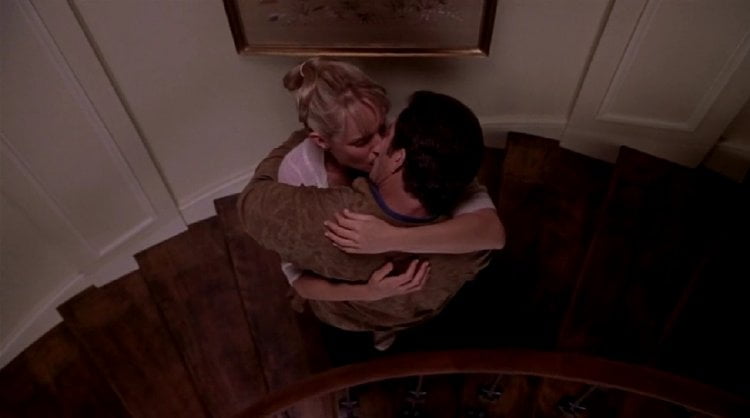 Hot shot advertising exec Nick Marshall (Mel Gibson) thinks he's God's gift to women, but after one big jolt gives him the power to hear womens' thoughts he's about to get another jolt as he discovers "What Women Want."

Nick Marshall has been fawned over by women since he was the only child of a single Las Vegas showgirl mom. His housekeeper babies him, his doorwoman (Loretta Devine) ogles him, and the girl at his coffee shop (Marisa Tomei) flirts with him. He's a guy's guy ad exec, adept at luring men to cars, booze and smokes with gorgeous babes. But it's no longer the 80's and women are a huge part of the consumer demographic, so Nick's boss Dan Wanamaker (Alan Alda) pulls the rug out from under him by bypassing him and hiring Cleo winner Darcy Maguire (Helen Hunt) as Sloane Carter's creative director.

Darcy immediate challenges her new team to come in the next day and pitch one or more of the female products she's distributed to them all in pink boxes. Nick goes home, gets drunk, dances to Sinatra, and then attacks his assignment by polishing his nails, waxing his legs and donning pantyhose. Then he has an accident involving a bathtub and a hair dryer. The electrocution doesn't kill him, but he awakens the next day to discover he can hear women's thoughts. Now he can get Lola (Tomei) into bed and use Darcy's own thoughts to steal her job.

Screenwriters Josh Goldsmith and Cathy Yuspa (TV's "The King of Queens") take a potentially amusing concept and bury it. Nick is a jerk who's given jaw dropping advice by a female psychiatrist (Bette Midler) to use his newfound gift to empower himself over women. Very few of the thoughts emanating from women in the streets' heads ring true, although more effort has been made with Darcy and Lola. No effort is made for Nick to put any spin on what he hears - often he just repeats what he's heard back to the woman who's just thought it. After pursuing Lola for what appears to have been an extended period of time, Nick wins her over by playing to her fears. After he beds and forgets her, having become entangled with Darcy, Lola appears and demands an explanation. The one that's give - he's gay. This is some seriously bad writing.

Mel Gibson has some fun with the role and proves that he can move into the romantic comedy genre. His Fred Astaire turn to Sinatra's "I Won't Dance" is admirable, although the work that went into it shows. He's undercut by the writing which muddles his motivation with Darcy, but gains sympathy in a 'learning to be a dad' subplot with his teenage daughter Alex (Ashley Johnson, "Anywhere But Here") and another subplot involving an unnoticed, mousy file clerk.

Hunt is believable as a vulnerable woman finding herself in a position of power. Tomei is appealing, if badly treated by the script. The highly billed Mark Feuerstein ("Woman on Top") makes little impression as Nick's buddy Morgan. The film also features Lauren Holly as Nick's ex and Delta Burke and Valerie Perrine as Nick's adoring office assistants.

What women may want is better romantic material for Mel Gibson.