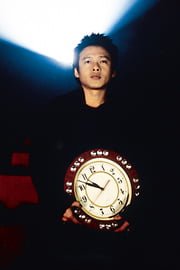 Hsiao Kang (Lee Kang-sheng) is barely coping with his father's (Miao Tien) death and his mother's (Lu Yi-Ching) grieving.  One day, as he sells watches on a busy Taipei street, he meets Shiang-Chyi (Chen Shiang-Chyi), a young woman who convinces him to sell her his own watch before she leaves on a trip for Paris.  As mom obsessively paves the way for the return of dad's spirit, Hsiao Kang begins a personal mission to change every watch and clock in Taipei to Paris time in writer/director Tsai Ming-liang's "What Time Is It There?"

With the exception of dad, Tsai's three main characters are the embodiment of loneliness.  While his film is touched throughout with sly jolts of humor, its cumulative effect is an enveloping melancholia tinged with hope.

Dad calls for his son, then retires to the back porch for a smoke.  Cut to Hsiao Kang telling dad, now in a box on his lap, 'we're going through the tunnel father - you'll have to follow us,' as he travels to a Buddhist internment ceremony.  Mom erects an altar and searches for her husband's spirit everywhere - the cockroach her son uncovers in the kitchen, his pet fish.  When Hsiao Kang resets their clock, mom's convinced it's a message from dad and begins fixing dinner at midnight.  Hsiao Kang's bathroom habits are impacted even more by mom's preoccupation than his mealtimes.

As Hsiao Kang resets clocks (one scene even recalls the famous Harold Lloyd silent, "Safety Last") and watches "The 400 Blows" on video, Shiang-Chyi is revealed to be less sophisticated than her destination would indicate. Unable to figure out the menu in a restaurant, she eats junk food in her room in the 3rd Arrondissement.  Venturing outdoors, she sits on a bench in a cemetery where a resident (Jean-Pierre Leaud, "The 400 Blows") offers his phone number.  The film builds to a literal climax as mother, son and tourist all have sex, but even this is a lonely experience for each.  The final scene recalls the final scene of yet another largely silent character, Chauncey Gardner of "Being There."

Tsai unfolds his film in a series of long, static, unedited shots.  Once Tsai establishes his frame, his actors enter and exit it, even overshoot it. Tsai's deliberate pace, though, may take some getting used to for American audiences.  His film is slow to build and quick to drop off, but its mood permeates.  Tsai's screenplay (cowritten with Yang Pi-Ying) features very little dialogue, relying more on imagery (cinematography by Benoit Delhomme, "The Scent of Green Papaya"; production design by Yip Kam Tim, "Crouching Tiger, Hidden Dragon") and his actors' facial expressions and body language to propel his story.

"What Time Is It There?" is an original work that evokes classic cinema moments, an Asian film that incarnates Brazilian saudade.

Hsiao-Kang (Lee Kang-Sheng) sells watches from a briefcase in front of Taipei's train station. When his father suddenly dies, the young man must cope with his grieving mother who is now obsessed with the return of her dead husband's spirit. A young woman, Shiang-Chyi (Chen Shiang-Chyi), insists that she buy Hsiao-Kang's own watch and he, reluctantly, sells it to her. He immediately become smitten with the young woman after agreeing to sell her his watch and learns that she is leaving for Paris. He becomes as obsessed with the pretty girl as his mother is with her husband's spirit and starts setting every clock he can find to Paris time in director Tsai Ming-Liang's "What Time Is It There?"

This is a quiet, thoughtful work that sprinkles satire and humor throughout as it takes a look at life's simple moments. Hsiao-Kang keeps to himself, hawking his wares and tolerating his mother's strange behavior as she prepares for the return of her dead husband's spirit. She has taped over all the windows in their apartment so as not to have bright light disturb her ethereal spouse. Hsiao-Kang, during the night, must urinate into anything that doesn't leak to avoid bumping into his dad's ghost wandering the apartment. His chance meeting with the strong-willed Shiang-Chyi sets him off on his own obsession with Paris time.

Shiang-Chyi leaves on her holiday to France in hopes of finding a different world. Instead of Paris freeing her spirit, though, she finds it as lonely and isolated as her home in Taipei. She has brief brushes with others in the City of Lights but is still all alone until she meets a woman from Hong Kong (Cecelia Yip) who takes Shiang-Chyi in. She also has a chance encounter with actor Jean-Pierre Leaud, the pre-teen alter ego of Francois Truffaut in the 1959 classic, "The 400 Blows." The story parallels the lives of the two young people who, in the end, are united, but in an unexpected and mystical manner.

"What Time Is It There?" isn't the kind of film that will draw droves of westerners to its theater doors. In place of action and plot is a whimsical journey through a slice of the lives of two lonely people. Hsiao-Kang must cope with the increasingly erratic behavior of his mother who, at one point, freaks out when her son almost kills a cockroach found in their apartment - "Don't kill it! It could be your father's reincarnation!" She becomes even more obsessed with her husband's return when she finds all the clocks in her home turned back, thinking it is yet another sign from the grave. We, the audience, are privy to the mysterious truths of the clocks.

The odd blending of the serious and the comical makes this slow-paced, lyrical production an entertaining interlude into the world of helmer Tsai-Ming Liang. The filmmaker has his own view of life (and death) and takes us into the lives of his main characters. He has his own obsession with Truffaut's aforementioned film and bits and pieces of it appear as an integral part of "What Time Is It There?" Hsiao-Kang's obsession with Paris time takes on focal importance as the young man cannot stop himself from setting ever clock he sees back seven hours. In one sequence, he spots a huge bank clock and, in a sendoff to the great Harold Lloyd, performs acrobatics to alter that timepiece, too.

The pacing is slow, the dialogue minimal and the camera work static, but the gentle melding of drama and comedy makes "What Time Is It There?" something the true film buff will enjoy.