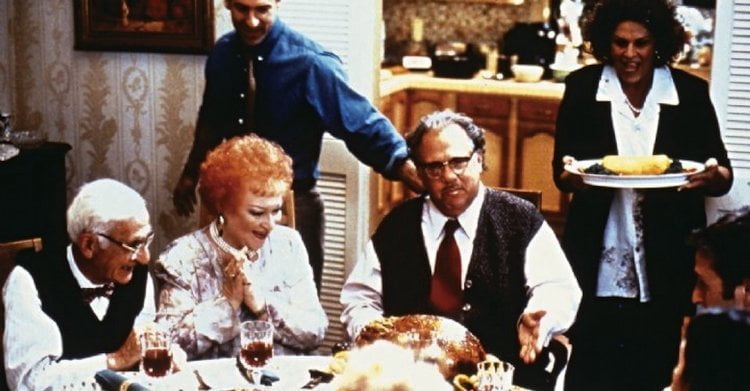 It's Thanksgiving and all kinds of family trauma is occurring within one cross cultural L.A. suburb. The African American Williams deal with a rebellious son amidst a traditional mother-in-law/daughter-in-law kitchen tussle while the Mexican Avilas face the breakup of a matriarchal marriage and two new boyfriends.

Meanwhile the Jewish Seeling family daughter has come home with a suitor of the wrong gender while the Vietnamese Nguyens argue tradition across a generation gap in director/cowriter Gurinder Chadha's ("Bhaji on the Beach") "What's Cooking?"

There hasn't been a good Thanksgiving movie since 1987's "Planes, Trains and Automobiles" (Jodie Foster's "Home For the Holidays" was a misfire and "The House of Yes" isn't exactly traditional fare). Indian eyes bring a cross-cultural look at this most American of holidays, extended families with all their complications, and not incidentally, the glories of world cuisine.

Of the four families, there's really only crossover between the Mexican Avilas and Vietnamese Nguygens. Their college age children are a couple, just being introduced to the Avila clan while being hidden from the Nguygens. Elizabeth Avila (Mercedes Ruehl, "The Fisher King") is also the teacher of the Nguygens' youngest and rents videos from their family store. These two families represent the extremes in acceptance of other cultures and close-mindedness (ironically, it's Trinh Nguygen (Joan Chen), not her husband or her mother, who clings most to the Vietnamese way of life).

The story deals with father and son conflict (Ronald Williams (Dennis Haysbert, "Love and Basketball) and his son Michael) and father and son bonding (Javier Avila and his son Tony embarrassingly both try to relate to daughter/sister's boyfriend Jimmy Nguygen by praising Bruce Lee). Acceptance of non-traditional relationships (Kyra Sedgwick as Rachel Seeling and Julianna Margulies as Carla), marital infidelity, premarital sex, education, gang warfare and the proper side dishes to serve with a turkey are all explored.

The large ensemble cast is one of the most cohesive of the year and are too numerous to mention. Mercedes Ruehl gives a sexy, confident performance as a middle aged mom blooming within a new relationship. Alfre Woodard (Haysbert's costar in "Love and Basketball") is a mother on the verge of a nervous breakdown, trying to hold her family together. Sedgwick and Margulies are a believable couple dealing in their different ways with Rachel's mystified parents. Maury Chaykin ("Mystery, Alaska") is terrific as Herb Seeling, a man mad about his dachshund Marty, his hot tub and his twin grandchildren, but bewildered by his daughter Rachel's dinner announcement. Lainie Kazan ("The Crew") completes the Seeling couple. Newcomer Will Yun Lee ("Witchblade") makes a strong impression as Jimmy Nguygen.

Chadha keeps multiple story lines going not only within each family, but across the four, without ever losing her audience, nicely allowing the families to intersect at the film's climax in a rather surprising visual. Camera by Jong Lin is immediate and intimate with both the characters and the food preparation and presentation. The film's score begins with salsa and remains lively until the film's latter section where Chadha wisely dispenses with the music to rachet up the growing tension of her (and cowriter Paul Mayeda Berges') story lines.

"What's Cooking" is a solid little film that should endure as a holiday favorite. Which dinner looks the best? Well it's a toss up between the Avila's Mexican al fresco spread and the drumstick Marty's overjoyed to find in his dog bowl.