What a Girl Wants 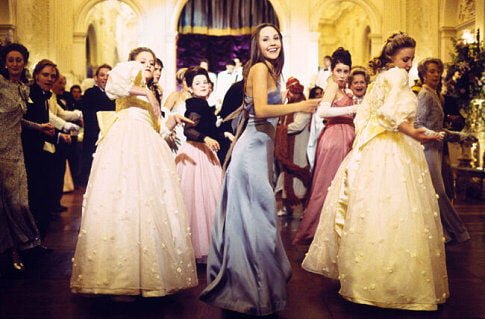 17-year old Daphne Reynolds (Amanda Bynes) wants just one thing - to dance with the father she has never known, except through her mother's stories. Libby Reynolds (Kelly Preston) fell madly in love with Henry Dashwood (Colin Firth), the heir to an English lordship, during their independent days. His politically motivated family, though, conspired to break up the happy couple and succeed, leaving Libby to raise, by herself, the product of their love - Daphne. Now, the free-spirited young woman sets off to England to find her father and get "What a Girl Wants."

Daphne Reynolds (Amanda Bynes, "Big Fat Liar") has had a fine childhood growing up in a Chinatown walkup with her folk singing mom Libby (Kelly Preston, "View From the Top"), but when her fifteenth birthday passes, Daphne decides that her father, Lord Henry Dashwood (Colin Firth, "Bridget Jones's Diary") is "What a Girl Wants."

Warner Brothers seems to have crossed Disney's "The Parent Trap" with "The Princess Diaries," but this is actually based on a 1958 play, "The Reluctant Debutante," by William Douglas Home. Director Dennie Gordon ("Joe Dirt") doesn't overcome Bynes's inexperience with timing nor does he show restraint with villainy, but Bynes's likability and Firth's charm go a long way towards making this film a pleasant enough diversion.

After witnessing the umpteenth father-daughter dance at the weddings mom sings at while she works with the catering staff, Daphne crosses the Atlantic in search of the father who doesn't know she exists. After plunking down in a boho hotel, the better to meet love interest/musician Ian (newcomer Oliver James), Daphne unceremoniously arrives at the family estate by climbing over the gated walls. A picture of her dad taken in Morocco by her mom is all it takes to convince Henry, who is at a critical crux in his political career, that she's his daughter, much to the dismay of his ambitious fiancee Glynnis (Anna Chancellor, "Four Weddings and a Funeral") and her teenage daughter (Christina Cole).

Henry decides his daughter will stay for the summer 'season,' and a series of posh events unfurl, each segment titled by an invitation. Daphne displays her crude American ways and makes some unlikely friends, then cleans up her act and loses Ian all before deciding that she just wants to be herself. This, of course, causes a rueful Lady Dashwood (Eileen Atkins) to remind her son of all he's given up so that everyone can live happily ever after.

Bynes's fresh-faced optimism and initial refusals to back down to snobbery and injustice is symbolic of American amiability and independence. The Brits are represented by the upper crust - either stuffy and conniving (Glynnis and her father Alastair (Jonathan Pryce), Lord Orwood (Roger Ashton-Griffiths), endearingly eccentric (Henry Dashwood and his mother, formerly of the stuffy and conniving category) or mousy fashion disasters in need of a shakeup (Peach and Pear Orwood). Ian is the down-to-earth exception and even he's revealed to have an unusual background to make him more suitable for Lord Dashwood's daughter.

With some maturing, Bynes should have a career in front of her. She certainly displays no lack of self-confidence. She possesses the types of looks that can swing from a wholesome chipmunk-like appearance to that of an alluring young woman with a toss of her hair. Firth trots out his "Bridget Jones's Diary" mode of a man who appears to be a stuffed shirt on the surface but who, in actuality, is drawn to the wild side, and runs with it. The film's largest lie is that Firth's Henry Dashwood would ever have been attracted to "Four Wedding's" Duckface. Kelly Preston brings an appealing warmth to Libby and surprises with an able voice as well. Oliver James displays a fresh and natural ability on screen and also gets to take to perform musically.

"What a Girl Wants" isn't deep, edgy or original, but it should play well with its intended audience. It's a step up from "The Princess Diaries."

Helmer Dennie Gordon, with the help of the original play's writer William Douglas Home, update the author's work that was first brought to the screen in 1958 as "The Reluctant Debutante," starring Sandra Dee in the title role. I have to admit, this update of the Cinderella clone, is a charming little fairytale and a showcase for the attractive and talented Amanda Bynes. I first took note of the young actress as Frankie Muniz's sidekick in "Big Fat Liar" and could see the talent she has. Her star debut may be a cliché of a billion such movies before but she, Colin Firth and the rest of the cast and crew succeed in giving us a fresh update on the old standard.

Daphne, because of her mother's love has had an interesting life growing up with a singer/musician mom and living in a second floor walk up in New York's Chinatown. Libby has tried to make every birthday special but the one thing Daphne wants is to meet her father. When Libby got pregnant, years before, the Dashwood family advisor, Alistair Payne (Jonathan Pryce), convinced her that Henry did not want her around and sends her on her way. Henry never knew of the deception, thinking that Libby had made the choice for herself. Despite only having one parent to raise her, Daphne has grown up well adjusted but with a big something missing in her life.

She treks to England, finds her father and presents Henry with her birth certificate naming him as her father. She also shows him a photo that her mom gave her of Henry in his younger days. Henry is convinced even as Payne and his daughter Glynnis (Anna Chancellor), also Henry's fiancée, plot to get Daphne out of the picture. Henry is giving up his hereditary seat in the House of Lords to run for the House of Commons and Payne does not want anything, especially an illegitimate child from America, to spoil his plans to get Henry elected. More important, Payne is using Henry to assure his own future. But, Daphne is smart, pretty and charming, if a bit rough around the edges and grabs the attention of the British press. Henry decides that he wants to keep his daughter around for a while.

Henry is both dismayed and elated by Daphne's arrival. He is thrilled to learn he has a daughter, especially one who is so much like her mother, for whom Henry has never dropped the torch of his love. He loves his daughter and adores her free spirit as she makes a name for herself in the British tabloids for her American antics. But, the often negative and embarrassing news coverage has a detrimental effect on Henry's campaign and Daphne decides to try to fit into the royal mould to help her dad. Her newfound Brit boyfriend, Ian (Oliver James), doesn't understand why she wants to be like everyone else when she is obviously "born to stand out." There are trials, tribulations, petty jealousy (from her soon-to-be evil stepsister, Clarrisa (Christina Cole)), true love and romance in this Cinderella fable that hits it teen femme target audience square on. Their teenaged boyfriends won't mind watching Amanda Bynes either. The actress is described, by her fan boys, as a "Hottie!"

Initial buzz for "What a Girl Wants" has faulted it for being a rip off of the successful "Princess Diaries." The latter picture benefited greatly from the performances of Julie Andrews and Hector Elizondo and the veterans helped that film immensely - despite a truly horrible performance from Anne Hathaway as the princess. Amanda Bynes shows far greater ability as an actress and comedian and is a quite charming Cinderella. The references to that classic love story are obvious, maybe a little heavy handed, but the likable performances of Bynes, Firth (in a role that the new Hugh Grant could have pulled off, too) and Kelly Preston, and the sweet nature of the film should get a big draw from female teen population and more.

Supporting characters are well played with Pryce playing the conniving, backstabbing advisor with a wicked leer. Chancellor relishes in the soon-to-be-evil-stepmother role as she desperately clings to her aspirations even as the reminder of Henry's happy past threatens her position. Eileen Atkins does the veddy, veddy British family matriarch with a heart to perfection. When Daphne hugs her for her kindness, she gently pushes the girl away saying, "I'm British. We only hug dogs and horses." Oliver James is charming as the musician and jack-of-all-trades guy who Amanda falls for.

Dennie Gordon and his cast and crew do a first-rate job with the clichéd material. There are the expected fish-out-of-water antics as Daphne inadvertently crashes a fashion show and ends up in the lap of Prince Charles or gets a formal party to crank it up, causing an antique chandelier to come crashing down. There are also a couple of montages of the obligatory outfit changes that are a staple (unfortunately, as I am sick to death of the this inevitable cliché) to teen targeted movies. I can forgive it its minor foibles, though. It gives just what a girl wants.