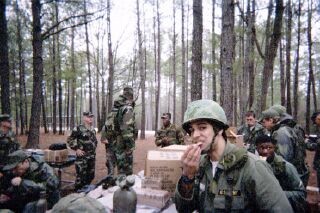 In 1965, President Lyndon Johnson ordered an increase in America's commitment to stem the spread of Communism in Vietnam. Lt. Colonel Hal Moore (Mel Gibson) is given command of the 1st of the 7th and he and his men are the first regular army types to be sent to fight the Commies. Their first test, and it is a doozie, is to confront a North Vietnamese force of unknown strength in the aptly named Valley of the Shadow of Death in the true-life story, "We Were Soldiers."

Producer/star Mel Gibson hands over directing responsibility to "Braveheart" screenwriter Randall Wallace ("The Man in the Iron Mask") for their Vietnam War film, "We Were Soldiers." Adapted by Wallace from the book "We Were Soldiers Once...and Young" by Lt. Gen Harold G. Moore and Joseph L. Galloway (played by Gibson and Barry Pepper in the film), this is the least successful of a recent spate of ultra violent war films that ennoble the U.S. military.

The film opens with a flashback depicting the North Vietnamese slaughtering the unprepared French Army in a surprise attack. Cut to Fort Benning, GA, where Lt. Moore and his family are just arriving to receive his new assignment. Julie Moore (Madeline Stowe, "The Last of the Mohicans") gathers wives, such as the expecting Barbara Geoghegan (Keri Russell, TV's "Felicity"), together to discuss local supermarkets and racism. Her husband buddies up to copter pilot Major Bruce Crandall (Greg Kinnear, "Nurse Betty"), whom he'll need to rely on as his 'cavalry' lead, and prays with 2nd Lieutenant Jack Geoghegan (Chris Klein, "Rollerball").

The Harvard military historian and strategist is delivered two blows before he ships out. He'll be heading up the First Battalion of the Seventh Calvary, Custer's regiment, and no declaration of 'state of emergency' will result in one third of his trained men being replaced with new recruits. He vows to his men that they will all be equals, that he will be the first and last to leave the battlefield, and that, dead or alive, they will all come home together. On November 14, 1965, they begin landing in Ia Drang, known ever after as "The Valley of Death," where 400 U.S. soldiers will take on 4,000 North Vietnamese.

Ever since "Saving Private Ryan," it seems as though war films are made with a sense of one upmanship - how much more hellish, realistic and gruesomely violent can they become? "We Were Soldiers" often feels like an unrelenting slaughterfest, and while its antiwar message couldn't be clearer, it attempts to make too many statements and becomes confused in the process.

Director/screenwriter Wallace tries to give a face to the North Vietnamese by following one soldier who's been keeping a diary and a picture of a young woman, yet his rally to attempt to bayonet Moore is met with a joke. A coda where the diary has found its way into the hands of that young woman breaks credulity. Moore responds to a chapel inquiry from Geoghegan about not wanting to create more orphans by asking God to ignore enemy prayers and help them blow the enemy away. A battered American flag and listing of those who died at film's end comes across as an obvious ploy to link these soldiers with World Trade Center victims. The film offers no stance on American involvement in Vietnam except by portraying the U.S. soldiers as 'dying for their country.'

Gibson is noble and earnest as Moore, a man determined to do right by his men, but his characterization lacks subtle depths. Stowe, ridiculously outfitted in a period Cher wig, leads the female home front segments down a bad path. Not a single one of these scenes work, especially when Stowe and Russell begin parading around like Stepford wives bearing telegrams. Kinnear is uneven as Crandall, good when reacting to bringing the wounded out, too softly sensitive when making eye contact with Moore. Sam Elliot is amusing as Moore's gruff right hand man, Sergeant Major Plumley, but he's frequently unintelligible and no more than a sidekick. Klein is a saintly symbol. Barry Pepper brings some grit to the lone journalist present through the fighting.

Technically, the film succeeds in immersing its audience in the midst of a hellish battle, but Ridley Scott's "Black Hawk Down" is far more successful in getting us inside its characters' experience.

The script, by helmer Randall Wallace, is by the numbers and wooden as it sets up the story with the arrival of Lt. Col. Moore at Fort Benning. He is selected to lead the elite First Battalion of the Seventh Cavalry - the same unit commanded by George Armstrong Custer at the Little Big Horn massacre over a century ago - and bring into being a new form of mobile warfare with the helicopter replacing the horse as the conveyance to battle. We go through the tough training Moore puts his men through. We see the family life of a soldier depicted by the colonel's loyal, loving wife. Our guts are wrenched when the army sends a Yellow Cab to deliver the telegrams that begin with the fateful "We regret to inform you?". But, for all of that, the screenplay is manipulative malarkey at times.

Wallace's screenplay, based on the book We Were Soldiers Once...and Young by Lt. Gen. Harold G. Moore and Joseph L. Galloway, attempts to cover too much ground, even with a run time approaching the 2½ hour mark. Besides the vicious Battle of Ia Drang as seen through the eyes of Moore and his men, there is the depiction of the pressures upon those left behind at home, plus an attempt (mishandled) to show the battle from the viewpoint of the North Vietnamese general (Don Duong) and his men. We see one of the NVA soldiers, right before going into battle, writing in his diary and gazing, longingly, upon a photo of his wife - she, too, so very far away. It's a politically correct attempt to put a human face on what has been considered, until recently, an enemy/monster. It is also manipulation of the coarsest kind.

There are inconsistencies or things questionable in the film that also gives me pause. Did the US Army really use the Yellow Cab Company and its drivers to deliver the regrets telegrams to the wives of the dead soldiers? If so, it gives the term "military intelligence" new meaning! In another sequence, Moore is given the above mentioned North Vietnamese soldier's diary after the battle. Later, we see the dead man's wife reading said diary? Huh? How the heck did Moore get this personal item back into her hands? The last I knew, at the time, the US Postal Service did not make deliveries to Hanoi. The US Air Force did, for sure, but not the US Mail. Other niggling things about the script bug me and detracted from the flow of the based-on-events story.

The characters in the film are uniformly brave and honorable and peppered with cliché. Gibson portrays the commander who prizes the lives of his men above all else except the defeat of the enemy. Sam Elliott plays the top enlisted man and Moore's right hand man, Sgt. Major Basil Plumley, a gruff, craggy, hard-bitten old soldier who knows his way around a battlefield. Chris Klein, as rookie Lieutenant Jack Geoghegan, is the bright, naïve platoon leader that has the lives of his men foremost in his mind. Madeleine Stowe is the stoic Julie Moore, wife of the colonel and de facto leader of the wives left at home thousands of miles away from their men. Greg Kinnear, as chopper commander Major Bruce Crandall, is the savvy lead pilot who takes Moore's men into the Valley of Death and, like an angel, hovers above the troops to inflict hurt on the enemy and save the lives of the wounded GIs. Barry Pepper, as photojournalist Joe Galloway, is the chronicler of the battle who is there to help the folks at home understand the war better. All are played as characters and symbols, rather than people, and none stands out, not even marvelous Mel.

Techs are first-class, especially the battle sequences. "Saving Private Ryan" raised the bar for the reality of battlefield violence and this you-are-there trend has carried forward to such films as "Black Hawk Down" and "We Were Soldiers." Attention to the period detail is a major plus in this latest war drama, from the authentic uniforms and weapons of both American and North Vietnamese troops to the fiery napalm raids on the North Vietnamese by propeller-driven Skyraiders and attacks by heavily armed Huey helicopters. I could find nary a false move in the staging and execution of this bit of American history.

Wallace penned the screenplay for Gibson's Oscar winning "Braveheart" and got the nod to direct this ambitious modern, true-life war story. I think it is too daunting a task for the sophomore helmer (he previously directed the 1998 film "The Man In the Iron Mask," not a memorable flick) and there is a clunkiness to the film's flow. For instance, during the heat of battle, with men's lives hanging in the balance, the action cuts away to a close-up of Julie Moore's vacuum cleaner. What the heck is that about? It makes me wonder what the film would have been like in the hands of a more seasoned director. But, then again, I have beaucoup problems with the screenplay, too.

I'm a big fan of war movies and I had high hopes going in to "We Were Soldiers" but they were not met. It's not that the film is bad, it's just not really good.