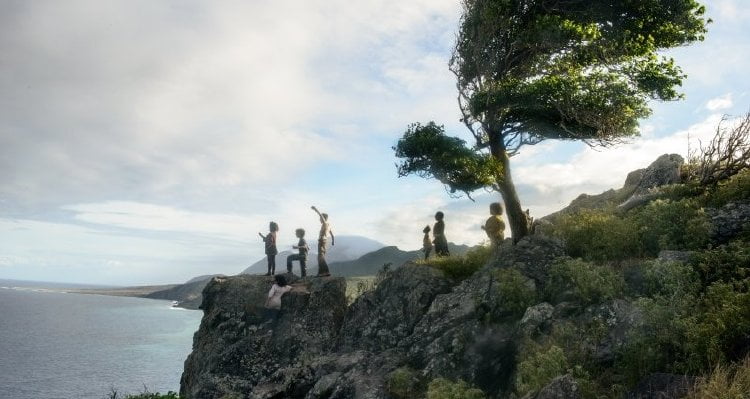 When a young boy beckons from the roof of a speeding freight train, a young girl and her two twin brothers jump from the window of their bedroom atop their mother's diner. They will become lost on a mysterious island where the fight to retain the freedom and joy of childhood will evolve into the maturation of "Wendy."

Cowriter (with sister Eliza Zeitlin)/director Benh Zeitlin's long awaited follow-up to his 2012 Sundance Grand Jury prize winner "Beasts of the Southern Wild" is as pure an example of ‘sophomore slump’ as I have seen, a muddled reimagining of the J.M. Barrie tale as gritty, retro magical realism with a Peter Pan (newcomer Yashua Mack) more giggling tyrant than free-spirited leader. There are moments, such as learning that the Zeitlins’ Lost Boys are those who allowed life to affect them and so became old, when it seems like “Wendy” is coalescing into something meaningful, but the film’s handling of Hook and its motherhood themes are just so damned strange one disconnects.

Wendy’s initial introduction as a toddler is a nightmare of claustrophobic hand held close-ups
(cinematography by Sturla Brandth Grøvlen, "Victoria") establishing her life as the youngest of three in her harried but affectionate mom’s (Shay Walker) tiny diner. When her young friend Thomas’s dream (Krzysztof Mehn) is squelched by his grandmother, he defiantly chants he ‘ain’t gonna be no broom man.’ Wendy watches him board a train beckoned by a cloaked figure on top.

Years later Thomas is still missing. Wendy (newcomer Devin France) asks her mom what her dream was at her age. Then she asks what her dream is now. The answer – to take care of her children – is a letdown to the young girl. When she sees Peter’s profile projected onto her wall that night, she leaps, followed by her twin brothers James and Douglas (Gavin and Gage Naquin), astonished at her audacity. They will be pushed from the speeding train into the water far below, picked up in a boat and brought to a volcanic island where Thomas, the same age as we last saw him, declares himself Blackbeard.

The Darlings spend their days mock fighting pirates and sliding down mud trails. They are introduced to a bioluminescent sea creature which looks like a giant grouper covered in coral with a glowing underbelly and whale-like spout which Peter calls ‘Mother,’ telling them belief in it will ensure they never grow up. Then the kids spot an old man with a donkey who says his name is Buzzo, something Peter vehemently rejects. While exploring a half sunken fishing boat, Douglas is injured, then lost. James’s despair manifests itself in his hand, which quickly ages. He demands Peter cut it off. When Peter actually does, Wendy revolts, saying they need the help of a grownup. What follows oddly recalls Robert Altman’s “Popeye.”

“Wendy” is neither fish nor fowl, a fantasy rooted in gritty reality, a tale about childhood starring a sober young actress appearing older than her years. There are the germs of some vibrant ideas here, like Peter’s identity as a runaway Caribbean child wearing the remnants of his school blazer, but the film has the feel of one which has been endlessly fussed with until it drove its makers into submission.