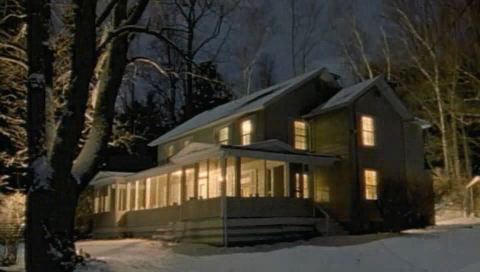 The Wolfman battles a robot. Eight-year old Miles (Erik Per Sullivan, TV's "Malcolm in the Middle") plays in the back seat during a snowy winter trip to the country. Suddenly a large buck smashes into the windshield. Miles' dad George (Jake Weber, "U-571") gets out of the car as hunters approach. Otis (John Speredakos, "Rules of Engagement") finishes off the injured deer then verbally attacks George for ruining the rack of the buck he'd been hunting for 16 hours. Fur-hatted mom Kim (Patricia Clarkson, "The Pledge") gets into the act, screaming at the men for using a gun mere feet from her young son. This crazy confrontation sets the edgy tone for writer/director Larry Fessenden's horror film of angst and the male primal urge, "Wendigo."

Fessenden trumps himself with the third of his modern metaphor horror trilogy ("No Telling," "Habit"). This stylish thriller has been influenced by films from "The Shining" to "Halloween," yet creates its own distinct place in the genre.

When the family arrive at the picturesque 'Stucky place,' the first thing George finds is a broken window and bullet in the wall. Only we've been primed to notice that the sled leaning against an outer wall seems to be inscribed with Otis' name. As dad boards the window, Miles plinks out the first two bars of the "Jaws" theme on a piano. Later, the fear factor builds when the family learns Otis has access rights to the property.

The next day, Miles is intrigued by a carving of a buck's upper body perched on a man's lower in the Phoenica Pharmacy. An old Indian man, whom only Miles is able to see, gives him the piece, explaining that it's a Wendigo, a powerful shape shifting spirit with an enormous hunger. The more it eats, the bigger it gets and the bigger it gets, the more powerful its hunger.

Miles' dreams are filled with images of the Wendigo intermixed with Otis. The next day, a sledding expedition with dad will begin a cycle of tragedy haunted by the terrible spirit.

Fessenden creates an unsettling, spooky mood with a whole bag of filmic tricks including lighting, montage, music and puppetry. Cinematographer Terry Stacey's ("Happy Accidents") camera spies on the family through a window before Fessenden cuts to a rapid series of playing cards where the Jack appears to kill the Queen. Miles is frequently shown in Spielbergian silhouette. Composer Michelle Dibucci ("Creepshow") echoes the sinister lalala-ing of "Rosemary's Baby." A group of locals Kim approaches for help look like butchers and barbecuers right out of "The Texas Chainsaw Massacre" until her POV is removed and they devolve into mediocrity. The Wendigo itself is shown in brief flashes or as a shadow, resembling the eerie tree trunk of "Little Otik."

As in "Habit," Fessenden includes frank, urgent sex scenes that here become creepy by their observation. While his screenplay is sometimes obvious, it's more frequently elegant, such as when he repeats his shocking opening image near the end of his film, or when the Indian's description of the Wendigo is recalled at Fessenden's uncompromising ending. Kim sums up a theme of the film with her comment that the city boy intimidated by the country boy is archetypal.

Fessenden also attains perfectly natural performances from his cast. Weber gets the right air of a city man trying to show his competence with the rougher aspects of life. The marvelous Clarkson also attempts to hide her yuppie nature, only slipping with her tendency to use the word 'f*&%ing' like the type of brittle intellectual Judy Davis usually plays. Erik Per Sullivan, who can frequently appear wooden, is well used for his wide-eyed innocence.

"Wendigo" is a horror film with more than scaring its audience on its agenda. It's a thought-provoking mood piece.

The McLaren family is on its way to a weekend in the country. Little Miles (Erik Per Sullivan) entertains himself in the back seat by battling his wolf man and spaceman action figures. Suddenly, a deer leaps in front of the car and dad, George (Jake Weber), can't avoid the collision. The little family finds itself stuck in the snow with the dying animal when three men toting deer rifles, led by Otis Stooky (John Speredakos), arrive on the scene. Otis is near uncontrollably angry that the city folk ruined the buck he had been stalking for 18 hours, pulls a handgun and, in a menacing manner, dispatches the injured deer only feet from little Miles. The boy's mom, Kim (Patricia Clarkson), freaks out over the danger to her son when a tow truck driver arrives and tensions dissipate, but there is evil in the air in "Wendigo."

Helmer/scribe Larry Fessenden, with his supernatural horror film, "Wendigo," has created a unique, dark story that combines elements of other creepy flicks but succeeds in coming up with an original, eerie film in its own right. From the start tensions mount when George can't avoid hitting the deer that is the catalyst for events to come. When they arrive at the cottage they find it unexpectedly frigid inside. George discovers the cause, a broken window, and the reason for it - a bullet embedded in the wall. Later on, George and Miles are collecting firewood when they see Otis watching them. Just before the strange acting guy speeds off he shouts that he has pass through rights on the property. Things get even stranger when Kim and George learn that Otis's family owned the house but did not leave it to the disgruntled heir. He blames these damned city folk for taking his birthright and he is out to get them.

Even though the budget is obviously small, the cast is richly endowed with experienced, effective actors. Clarkson is strong as the protective, aggressive city shrink/mom who brooks no threat to her child. She espouses the good in men, including Otis, in opposition to George's cynical attitude of trust no one. Jake Weber plays the insecure stranger in a strange land, the big-town boy who feels out of his element in the country where men walk around toting guns and shooting things. Little Eric Per Sullivan doesn't have a lot of range as an actor but fits the bill as the somewhat vacant, pensive Miles whose belief in the Wendigo releases the beast whose hunger is never satisfied. Speredakos, as Otis, reminds of another film Otis - Tom Towles in the edgy 1990 flick "Henry: Portrait of a Serial Killer." Both characters have personalities devoid of humanity and Speredakos is foe, monster, boogie man and crazy guy capable of any evil.

The original story has a tension from the very start that is sustained to the end. The city boy/country boy deadly rivalry is always evident as Otis shows up, with a sinister air about him, to threaten the little family's well being. Then there is Miles's story as he is presented with an icon of the Wendigo by a mysterious native America that only the boy sees. This unleashes the other worldly tale that uses time-honored folklore to convey the notion that there are forces, natural and supernatural, that will fight back against the intrusion of evil. This is not a "and they all lived happily ever after" tale and the climax has unexpected results that suit the film's dark, noir nature.

Techs are fair with the photography, by Terry Stacey, giving a murky look to the mostly nighttime settings. The Wendigo effects are cheesy but used economically with flashes of a menacing, almost skeletal beast that grows as it satisfies its hunger. Editing, by Fessenden, helps heighten the tension of the both the conventional story and the supernatural Indian myth. The helmer uses visual elements of such classics as "The Shining," "Close Encounters of the Third Kind" and "Jacob's Ladder" to good use.

"Wendigo" is getting limited release, at best, and may not be available or only for a very brief run at the local art houses. But, if you are a fan of the supernatural horror genre, it is worth a look.