Warm Water Under a Red Bridge 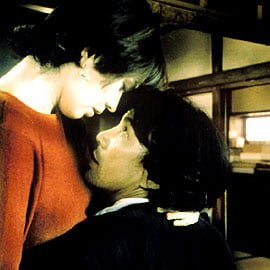 Yosuke Sasano (Koji Yakusho, "Shall We Dance?") is middle aged, unemployed, divorced and living on the streets of Tokyo. He meets and elderly, homeless wanderer who tells a tale about a stolen gold Buddha statue that is hidden in a house by a red bridge in a distant village. The old man's last wish is that Yosuke journey to the town, find the valuable artwork and make his fortune. The out of work Sasano has nothing better to do and heads for the town. He meets a young woman, Saeko Aizawa, and learns that she lives in the house by the red bridge! What he doesn't know, but will soon find out, is that she has a "condition" that causes her to gush water when physically aroused in "Warm Water Under a Red Bridge."

Badgered by his wife for money, recently laid off Yosuke (Koji Yakusho, "Eureka") listens with interest to homeless Taro's (Kazuo Kitamura) story of a stolen golden Buddha hidden at a red bridge in Kyoto. When Taro dies, Yosuke makes his way to Kyoto, where at the red bridge he finds Saeko (Misa Shimizu, "Dr. Akagi"), a woman who wells up in waters which can't be released unless she does something wicked in director Shohei Imamura's "Warm Water Under a Red Bridge."

On his arrival in Kyoto, Yosuke visits a grocery store where he observes the woman seen at the red bridge shoplifting cheese while water puddles about her feet. He finds an earring in the water and ventures to the old confectionery at the red bridge to return it. Saeko offers him some cheese 'flecked with red pepper,' which she insists is best paired with ice, then quickly takes him into her confidence about her strange condition. Soon they're lustily making love while she spurts, sprays and squeals.

We witness that warm water siphoning off into the river under the bridge, where fishermen delight in the aquatic life it draws. As he departs, Yosuke, along with these locals, observes an African student begin to net fish, before the officious permit officer Shin (Yukiya Kitamura) declares net fishing strictly forbidden. Shin then takes an interest in Yosuke, finding him a place at the Badger Inn (the food's lousy but it's cheap) and a job as a fisherman.

Imamura's fanciful tale is like an offbeat Japanese homage to "Local Hero." An out of towner seeks riches in a strange place where people come from far off places to fish, woman have fantastical powers, strange lights are created, characters dash about on scooters and homeless men take advantage of dinner invitations at the local inn. Saeko's allure is steeped in the stuff of legend, here, though, as hinted at by her odd, psychic grandmother and a flashback to her childhood folly, jumping into the river after her priestess mother, who drowned.

The film is peopled with delightful supporting characters. When Saeko signals Yosuke for a sexual liaison, he outruns the African being schooled via a runner's scholarship. Later we learn the young sprinter has thirteen children and sees an Olympic medal in his future before becoming his country's president. The Badger Inn owners are a good natured woman who dishes up food that her husband, constantly smoking in front the television, describes as swill. Shin molds events to suit himself, but keeps things moving along well enough in his briskly efficient manner.

Colors are symbolically used in this visually crystalline film, with red predominantly standing in for sex/fire juxtaposed against the marine blues of life/water. Yosuke's wife is shown living in an apartment of yellows and browns, earthbound like the bright yellow slickers that the fishermen wear to make a hard-earned living. With all the stunning visuals, however, Saeko's water gushing is badly handled, looking like the actress is holding her thumb over a hose in her lap. The film's central metaphor deserved more careful handling. Music by Shinichiro Ikebe reflects a playful nature with its cartoonish bells and whistles.

"Warm Water Under a Red Bridge" engenders good will with its amiably eccentric nature, but the experience isn't wholly satisfying.

Director and co writer Shohei Imamura (collaborating with Motofumi Tomikawa and Daisuke Tengan) adapts Yo Henmi whimsical story about a lonely man who, despite himself, finds happiness and passion with a lady for whom "turning on the water works" has a whole new meaning. The fantasy tale starts out promising enough as we watch a traditional stranger-comes-to-town story that has Yosuke as the loner attracted to the pretty lady. Saeko, he learns, is also a kleptomaniac and he follows her home to try to get into the house and find the treasure.

Yosuke falls for Saeko and when they finally get together he finds out her dark secret. When she gets passionate, she's like a fireboat on the 4th of July. Part of the story revolves around the healing power the couple's love has on Saeko's condition. When she's a gusher, the pair has to get rid of all the aqua and dump it in the river. Soon, the local fisherman start catching all manner of exotic fish that are attracted to the magical powers of Saeko's special water. Things get serious, however, when another visitor from Tokyo arrives, with his gang, looking for the Buddha.

"Warm Water Under a Red Bridge" tries very hard to be a magical, whimsical film but suffers from its length. This kind of lighthearted flight of fancy, to keep its magic, needs to be tight and focused (with opportunities, of course, to take some side trips). The point of the film and the ensuing romance is dragged along too long. I enjoyed the quirky courtship and the bevy of oddball characters - including an African runner training in Japan on a meager grant who plans to win the gold and, in ten years, be elected president of his country. It's an often-cute film but either needs more substance to fill the time or some judicious editing.

The look of the film is crisp and utilitarian, with lensing, by Shigeru Kamatsuhara, nicely capturing the small town feel. The water works F/X are less than successful, looking more like the couple are wrestling with an out of control fire hose. The good natured element of the story and the nice crafting make "Warm Water Under a Red Bridge" a good candidate for home viewing with its warm whimsy, but it is too long and it ain't "Local Hero."