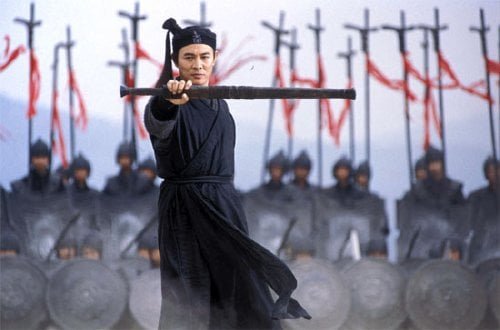 In the mid-18th Century, rebels who want to overthrow the corrupt regime were challenging the Manchu-dominated Qing Dynasty in China. Pang (Jet Li), one of the Qing generals, loses his entire command in battle and wanders the countryside in confusion and grief. A young woman, Lian, shows him kindness by feeding and caring for Pang. He meets, through her, a young rebel, Er Hu (Andy Lau), and his “big brother” Zhang (Takeshi Kaneshiro) and, together, they become “The Warlords.”

In 1860, General Pang Qingyun (Jet Li, "The Forbidden Kingdom") watched in horror as his entire army of 1600 were slaughtered by Taiping rebels. He was betrayed by his purported ally, the Ho Army, which did nothing. Pang finds comfort in the arms of a strange woma, Lian (Jinglei Xu), who nurses him back to health and later becomes blood brothers with two thieves from her village. Pang, Zhao Er-Hu (Andy Lau, "Infernal Affairs," "The House of Flying Daggers") and his younger brother Wu Jincheng (Takeshi Kaneshiro, "Red Cliff") appeal to the Ching Imperial War Council for additional troops after proving themselves in battle as "Warlords."

Asian film fans and historical buffs are in a sweet spot right now. After the epic "Red Cliff," which told of alliances, politics and battles in 200 B.C. directed by John Woo, along comes his former assistant, Peter Chan ("3 Extremes II") with a more recent story of scope and grandeur that is every bit as good, if not even better. Jet Li is phenomenal as the deeply moral and humanistic Pang who is forced to make hard decisions during wartime which return to haunt him during peace. Where "Red Cliff" reveled in military strategy, "Warlords" is more political in nature, yet both films feature two men in love with the same woman and both films sport expertly staged battle sequences.

After setting up an elaborate ambush, Er-Hu, whom Pang has discovered is Lian's lover, is captured and overpowered, but proving their blood brotherhood right out of the gate Pang saves Er-Hu, clasping the sword intended to kill him in his bare hand (ew - I hate when that happens). The old puppet masters of the Imperial Council refuse Pang's request, but he pushes on with his Shan Army, winning against enormous odds when Er-hu leads a suicide line to begin battle. Pang, in fact, defies all the odds and the Ho Army to capture Suzhou and push on to the Taiping stronghold in Nanking, but with the terrible burden of the slaughter of men Er-Hu had promised to let live. Then Lian becomes a thorn within the brotherhood and long and strong held loyalties are tested beyond all endurance.

While Jet Li, at 47, still gets to show off some incredible moves, here he really acts. He's maturing, and his Pang carries a heavy weight as he attempts to change his country for the betterment of all, yet must sanction killing in order to do so. His love for Lian is his biggest weakness. Lau is also terrific as the reformed thief also guided by a strong moral compass, but less experienced as a tactician. You really feel for both of these men, struggling to do the right thing and maintain their bond as history and politics (and sex) pushes them apart. As the youngest, Kaneshiro, so humorous and wily in "Red Cliff," here is the base of the seesaw, the one who tries to see both sides and maintain balance, but who ultimately, at least as written here, revenges one against the other. Jinglei Xu is a bit inscrutable as Lian, one of the film's only weaknesses - is she an opportunist? Following her heart? Both?

Action scenes are marvelously choreographed. The violence is felt without dwelling on the gore (although in one memorable bit, Pang literally cuts off his enemies at the knees). The Suzhou slaughter is painful to sit through, rightfully so. The film's climax is mesmerizing.

“The Warlords” is many things and they are all good. The 2007 Asian blockbuster has finally made it to our shores and we get a doozy of a movie. Political thriller, historical drama, epic adventure, love story, history lesson, chop socky flick, art house movie and gangster film, directors Peter Chan and Wai Man Yip bundle it all together and give it a great arc. The principal characters have a dynamic that is constantly changing as loyalties and allegiances shift to meet the political and emotional situations of the time.

Jet Li is at his best as both actor and martial artist as he portrays General Pang, who, in the opening minutes, loses every one of his men in battle. Despondent and utterly alone, Pang aimlessly wanders the countryside when he meets Lian and promptly faints from hunger and fatigue. She nurses him back to health and introduces Pang to Er Hu, who happens to be Lian’s lover. Er Hu tests the recovered Pang’s fighting skills and the former general passes with flying colors. He then meets Zhang and the three forms a brotherhood to put an end to the Manchu tyranny.

This is just the beginning for “The Warlords,” and the huge cadre of writers (eight are credited) create and carefully weave a tapestry of shifting politics and alliances. Things move in unpredictable but well ordered directions, always entertaining and action packed, to unexpected ends. Nothing happens as one expects and do not look for a Hollywood handling of the story. There, a large group of screenwriters on a project would be a death knell. Here, we have a near masterpiece.

However, it is not just the terrific screenplay and first-rate cast (on every level) that make “The Warlords” a marvelous work. The behind the camera contributions are on par with story and acting. All aspects of the craftwork are in top form - photography (painting-like at times), art direction, production design, makeup, costume and fight choreography and the rest are excellent.

My only question is why did “The Warlords” take so long to get here?