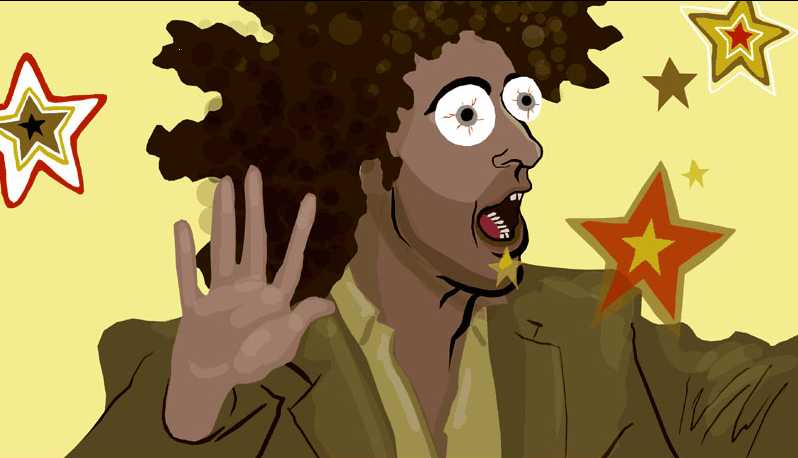 After his daughter Lorelei declares 'Dream is destiny,' writer/director Richard Linklater propels Wiley Wiggins ("Dazed and Confused") from the odd boat/car which picked him up into a world where dream is reality in "Waking Life."

This companion piece to Linklater's debut film, "Slacker," follows Wiggins' encounters with philosophers, rebels, criminals and artists as they discuss the meaning of human life. Shot on digital video, as is his upcoming film "Tape," "Waking Life" is given a trippy look by art director Bob Sabiston, who led a team of animators each assigned to 'paint' a specific character and segment of the film. The result is akin to the revolutionary rotoscoping used by Ralph Bakshi in "American Pop" with thirty different styles instead of one.

Along with Wiggins, we're presented concepts to ponder, like how our bodies completely regenerate every seven years yet we remain essentially the same person, or Phillip K. Dick's assertion that we're all in 40 A.D. and everything since has been a dream. We meet Ethan Hawke and Julie Delpy, reunited lovers of "Before Sunrise," conjecturing that dreaming is simply entering a collective human memory, an idea further explored late in the film when Wiley gets a great idea from a character he's met in a dream.

Wiley keeps trying to wake up only to find he's dreamed it, when along comes a man who's learned to control his dreams. He teaches Wiley tricks on how to determine if he's still asleep (try a light's on/off switch) while promoting the fun that can be had while in the unwakeful state.

Wiley's dream even includes celebrity guest appearances by tour guide Speed Levitch of "The Cruise" and director Steven Soderbergh as themselves. Yet for all the ideas it presents, "Waking Life" doesn't always stick to its own theme. One violent scene and the ravings of an imprisoned criminal feel plugged into the wrong movie and break its flow.

"Waking Life" is an interesting, thought provoking experiment that doesn't always maintain the lofty heights of its conception.

"Dream is destiny," says the fortune telling kids' game at the start of "Waking Life," the latest effort by filmmaker Richard Linklater, who is joined by animation art director Bob Sabiston. And dreams are the focus of this stream of consciousness work that takes live action and, with the help of computers and more than 30 animators, converts it into a highly stylish anime that delves into the workings of one young man's sleeping mind.

Wiley Wiggins arrives at a train station in a nondescript city and notices a pretty girl watching him intently. Nonplussed by her direct stare he wanders out of the station and is offered a ride by a man driving a small car-boat who gives the advice "to remain in a constant state of departure while always arriving. It saves on introductions and goodbyes." Unceremoniously left on a corner, the befuddled Wiley sees a piece of paper on the ground that says "look to your right." He does, only to see a speeding car bearing down on him. The next thing he knows he's waking from a dream. Or, is he?

Helmer Linklater, known for his Gen-Xer works "Slacker," "Before Sunrise" and "Suburbia," goes the surreal route with his intellectual and artistic look into the world of dreams. Shooting in three cities - Austin, San Antonio and New York - using consumer-level video cameras and a cast of close to 60 people, both actors and non-actors, Linklater tells of the stuff that dreams are made of. As Wiley wanders through the city and his dreams he meets many, many people who are willing to spout their own, individual philosophies of life, death and free will.

Teaming up with the writer/director of "Waking Life" and his team of animators are a number of his past film alumnus, including Wiggins, Adam Goldberg and Nicky Katt (all from "Dazed and Confused") and Ethan Hawke and Julie Delpy, reprising their characters from "Before Sunrise." Wiley Wiggins is the focal dream wanderer of the story (if you can call it that) who meets untold numbers of strange and sometimes wonderful folk who spew forth their philosophical ramblings. The insights of those beings that Wiley meets range from "your life is yours to create" to "a well-armed populace is the best defense against tyranny" and much more The philosophical question that is oft pondered through Linklater's state-of-mind tome comes down to: is life just a dream or is dreaming really life?

The stream-of-consciousness film style coupled with the variety of techniques used to animate the live action sequences takes some getting used to. Actually, the non-linear nature of the "story" requires a commitment by the viewer to accept the free-flowing philosophies and the varied anime. Each of the numerous animators on the project put their own imprint on the rotoscope technique use - that is, animating live action film, something developed by Ralph Bakshi years ago with "Wizards" and "The Lord of the Rings". Some are simple, almost like line drawings of the characters. Others lend a reality look to their sequences while others, still, give an exaggerated, surrealistic appearance to their animation of the live players. The disjointed nature of both the dialogue and animation caused quite a few audience members to walk out of the movie - something I noticed most recently during David Lynch's dream-based "Mulholland Drive." The dream stuff must hit a negative chord in some of us.

"Waking Life" is definitely experimental filmmaking that combines varied aspects of the craft. The animation of the live action is interesting and, if you can put up with the philosophical bull that sometimes spews from the characters, there are some interesting ideas put forth, too. But, it is not the kind of movie that is going to attract the mainstream, multiplex moviegoer. This isn't the kind of film that you can leave your brain at home to go see. Linklater requires a commitment from his audience that will garner some amusement and provoke thought, but its non-conventionality will be a turn-off to the less tolerant viewer.

It's an interesting philosophical and artistic effort but has limited appeal for the average movie bear. Richard Linklater flexes his creative muscle in a unique way.