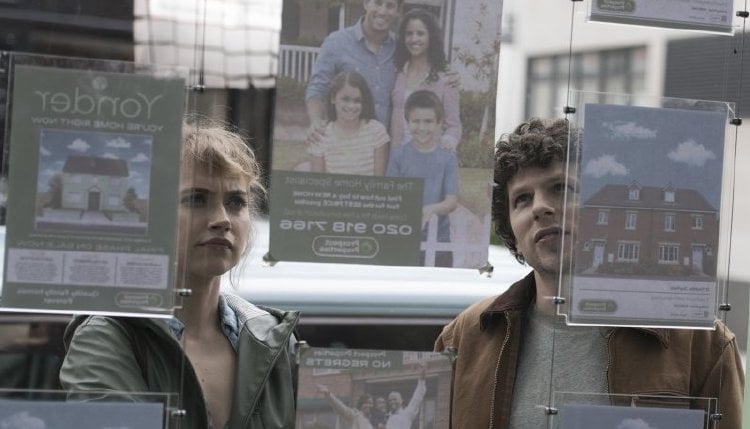 Gemma (Imogen Poots) and Tom (Jesse Eisenberg) are amused by the insistent manipulation of realtor Martin (Jonathan Aris) in getting them to agree to view a housing development, Yonder, that isn’t what they had in mind. After driving through an aggressively cookie cutter neighborhood exhibiting no signs of life, the couple actually do find qualities in #9 to admire, but that is before Martin disappears and no matter how they try to get out of Yonder they end up right back at #9. They’re being held captive in a “Vivarium.”

Director Lorcan Finnegan has come up with the creepiest story about parenting (along with screenwriter Garret Shanley) since David Lynch’s “Eraserhead.” Ostensibly about consumerism, a theme which is apparent on the surface, it is the requirement to raise a child, delivered in the same style of crate in which daily supplies mysteriously arrive, in order to be ‘released’ which stifles the couple, causing their only point of contention. The only thing more disturbing than Philip Murphy’s ingenious production design is Finnegan’s choice to have the Young Boy (Senan Jennings) (the ‘baby’ ages rapidly) voiced by an adult.

The parenting/nurture theme is introduced before we even meet Tom, Gemma comforting young Molly (Molly McCann) when her little student finds dead baby birds, pushed out of their nest, an event we’ve been subjected to over opening credits. It is not until the couple have run out of gas in Yonder trying to escape and a case of food appears before the home they cannot escape (#9, as in The Beatles looping ‘Revolution No. 9’ I presume) that Tom takes drastic action and lights the place on fire. The next morning, another case, this time with a baby boy, just what one of #9’s bedrooms has been decorated for, the home seemingly unharmed.

Cut to day 98 as the boy is measured against a door jamb, now apparently 8 years old in human terms. Gemma and Tom look exhausted. The boy eerily mimics Gemma’s gestures and their speech. He enters their bedroom without knocking and hovers at their door as they make love. Occasionally he merely stands and, mouth unnaturally agape, screams like Donald Sutherland in “Invasion of the Body Snatchers.”

After noticing an unnatural substance underneath the lawn sod, Tom becomes obsessed with digging a hole. Eventually he hears an odd sound emanating from beneath the ground, the same sort of sound that is emitted from the series of looping patterns the boy watches on TV, causing Tom to snap and lock him in the car. While this seems like a sensible move, the boy a boy in appearance only, Gemma’s maternal instincts cannot be suppressed.

Yonder is a strange place indeed, one which seems equally real and not, rows of green houses curving off into a virtual infinity against a sky which resembles the old flying toaster screensaver. Poots and Eisenberg begin to look haunted and weighed down early, like the sleepless parents of a newborn, and it is to the actors’ credit that although each of their characters deals with the boy differently, their bond never breaks, Eisenberg delivering a moving speech about how Gemma is his home in later goings. There are moments of humor, like the expletive laden phrase which replaces the ‘HELP’ the couple had painted on their roof, but as the film progresses, it becomes more and more horrific. Jennings has been well directed in his audio-enhanced performance, one which is picked up cleanly by Eanna Hardwicke when the boy reaches adulthood.

“Vivarium” is a surreal look at a literal daily grind.

Gemma (Imogen Poots) and Tom (Jesse Eisenberg) are a happy young couple and ready to make that big commitment – to buy a house. They stop at a local realtor where the agent (Jonathan Aris) insists they follow him to look at an amazing new home. What begins as a casual look-see becomes an endless nightmare in “Vivarium,”

Sophomore feature director and writer Lorcan Finnegan, with co-scribe Garret Shanley, creates a surreal world that thrusts a normal young couple in the middle of an inexplicable dilemma that they have absolutely no control over. The realtor, named Martin and a very strange dude indeed, insists the couple follow him to the new development, named Yonder.

They arrive at Yonder and every single unit is identical – and drab green – as they pull up to unit Number Nine. Inside, Martin sings the praises of the “diverse community, nicely blended” that provides “all you need and all you want,” then promptly disappears, nowhere to be found.

Having had enough of this strange place, they drive off to their normal life. Except, they keep ending up at unit Number Nine. This begins the nightmare that Gemma and Tom must endure - every day. I think I will leave it at that and let you find out the rest. It is worth the ride.

At first, as the couple keeps retuning, inescapable, to Number Nine, I wondered if the filmmakers could sustain what is simply a short story fleshed out to a feature length film. Well, the combination of an imaginatively well-told story, solid performances by the leads – with a quirky pair of performance as “The Boy,” younger and older (Senan Jennings and Eanna Hardwicke) – and surreal production design shows that this fleshing out can work.

“Vivarium” is unique in its nightmarish tale that really does feel like one you would have in your most troubled slumber.