View From the Top 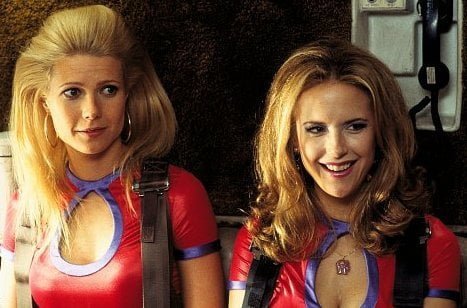 Donna Jensen (Gwyneth Paltrow) lives with her trailer trash mom in tiny Silver Springs, Nevada. But, she has greater ambitions than to just cool her heals in a go-nowhere town. When she reads the best-seller, The Sky Is My Life, by uber-stewardess Sally Weston (Candice Bergen) Donna knows her future will be "Paris, international, first-class" in "View from the Top."

Donna Jensen (Gwyneth Paltrow) believes her dreams of leaving her trailer park existence in Silver Springs, Nevada are answered with a job and assistant manager boyfriend at a local discount warehouse store, but when she's dumped, she transfers her hopes to retired uber-stewardess Sally Weston (Candice Bergen), Oprah talk show guest and author of "My Life in the Sky." Donna must hurdle many obstacles, including love, in her goal of 'Paris, First Class International,' but in attaining it questions her destiny given a "View From the Top."

Miramax's long-stalled kitsch comedy would have probably gone straight to video had it not starred Miramax darling Paltrow with box office heavyweight Mike Myers supporting. Devoid of laughs, this pasted together vanity vehicle turns its star into a Barbie doll makeover mannequin.

Donna's humble beginnings at Sierra Airlines reinforce her ex-showgirl mom's trashy trappings and find her two friends in the maternal mentor Sherry (Kelly Preston, "Citizen Ruth") and her own protege Christine (Christina Applegate, "The Sweetest Thing"). Although Christine wields all her feminine wiles, Donna wins the affection of Ted (Mark Ruffalo, "You Can Count On Me"), but the romance is short-lived when Donna and Christine get accepted into the stewardess school of prestigious Royalty Airlines in another state. Donna excels while Christine struggles, so it is a genuine shock when Christine is posted to International and Donna gets the workaday Express route hubbed in Cleveland.

Cleveland seems sweeter when Ted shows up, inspired by Donna to return to law school. Donna's enfolded by Ted's odd but loving family over Christmas, but turns her back on it all when she's given a chance to once again seize the brass ring.

Writer Eric Wald gets one genuine laugh making Donna's first day as a stewardess her first flight (she runs down the aisle screaming "We're gonna crash!"). and hits some notes of gentle whimsy with Ted's family and a glamorous view of airline stewardship from a bygone era, but every other aspect is forced and unfunny. Director Bruno Barreto ("Four Days in September") showed a light touch in his Brazilian "Bossa Nova" which he cannot translate for U.S. based comedy. Paltrow is unconvincing as a rube and her regal bearing unsuited to slapstick catfights. Applegate, who proved the only appealing entity of the Diaz atrocity "The Sweetest Thing," is saddled with an unappealing and unconvincing character. Preston delivers a rueful acceptance to her character and is allowed to duck out early. Ruffalo, an odd casting choice against Paltrow, aids the film immensely with a strong dose of likability.

Vet Bergen is a plus as the blatantly ambitious Weston, avoiding the brittleness she brought to a similar role in "Miss Congeniality," but Myers flails about as John Whitney, Royalty's instructor resentful at being denied his own career in the sky due to a crossed eye. The eye is a one-joke device milked for many. It's as distracting as Myer's distinctive brand of vocal cadence.

Production design, costume and makeup cannot get a fix on any one period, ranging freely over decades from the 1960s onwards. That the soundtrack is firmly planted in the 1980's, however, with prominently featured tunes from Cyndi Lauper and Journey, makes the film's two years sitting on the shelf seem longer.

"View from the Top" stays stranded on the runway, denied takeoff. It's got all the appeal of a bag of stale peanuts.

Miramax head honcho Harvey Weinstein must have had his navel all a-pucker with the prospect of a Gwyneth-starring comedy about the trials and tribulations of a woman who aspires to be the world's best flight attendant. He joins his favored star with talented Brazilian-born director Bruno Baretto ("Four Days in September") and a cast including the likes of Christina Applegate, Mark Ruffalo, Candice Bergen, Kelly Preston, Rob Lowe, George Kennedy, Jon Polito and the inimitable Mike Myers. It must have sounded great to Harvey. Now, if they only had a script.

"View from the Top" is in a word dull. It begins with pretty Donna looking to the heavens as her mother, once again, makes a fool of herself over yet another live-in boyfriend. Weston's book inspires Donna to seek a job in the skies and she signs on as an apprentice flight attendant with bottom-of-the-barrel Sierra Airlines. More experienced stew Sherry (Kelly Preston) shows her and another trainee, Christine (Christina Applegate), the ropes and the three become fast friends. But, the charm of flying the skies from one jerkwater town to another fades quickly and Donna and Christine aspire for more. They leave Sherry with Sierra and enter the rarified world as stews-in-training with Royalty Airlines.

As they endure the rigorous training under the tutelage of John Whitney (Mike Myers), the exacting, cockeyed flight attendant instructor, Donna works overtime to perfect every aspect of her chosen career. When exam day comes around, she knows she has it aced and is ready and willing to become stewardess-extraordinaire. Instead, she is assigned the lowly position on Royalty's Express service, shagging sandwiches and sodas, based in Cleveland, not New York. Still, she does her best and makes the most of it, until she crosses paths with Christine, who has made it to the top.

Donna discovers that Christine swapped their exams and got the revered position instead of her. She lobbies the help of Sally Weston and is re-exam'ed, passing with flying colors and getting her dream - Paris, first class, international - while Christine gets her just desserts. There is a price for getting to the top and for Donna it was making the choice between career and love. She met Ted (Mark Rufallo), when first starting out with Sierra and they dated. They met again in Cleveland, where he attended law school, and they fall for each other again. But, when Donna's big chance finally comes, she makes her decision and chooses her career. They part, sadly but amiably.

All this amounts to a very routine tale of a woman who gets what she wants, only to realize that what she really wanted all along was there all the time. Donna's story, a rags-to-riches fable, covers no new ground except to put it in the skies. The capable cast, unfortunately, do not get to put any life into their characters, although there is one exception. Mike Myers gamely tries to breath some goofy humor and life into the film as the cockeyed trainer, Whitney, who uses his own book, That's Procedure, to teach his wards. The cockeyed bit grows old fast, but Myers's natural style and humor makes his small part the most enjoyable thing in "View from the Top." The rest, including Paltrow, are hamstrung by the bland concoction of a script.

Newcomer scribe Eric Wald penned "View..." and it makes me wonder with amazement that someone, anyone, thought that this is funny. I know that things happen in the day-to-day life of the average person that are amusing - to that person. This is what the script, as put on the screen, feels like - the life of an average Joe, or in this case, Josephine, that isn't all that interesting, at least not enough to ask people to shell out nine or 10 bucks for the privilege to see a film that is akin to watching paint dry. Maybe it's me, but an 87 minute long movie (that's with outtakes), especially one touted as a comedy, should not feel like it runs twice that time.

Techs are OK but, even here, there is nothing to bring to note except, possibly, costume designer Mary Zophres for her imaginative flight attendant outfits that range from the ridiculous to the sublime. Director Baretto does little to exercise his proven talents.

If you've seen the trailer for "View from the Top" you have seen the funniest it has to offer and much of that is not in the film proper. Mike Myers tries to save this "View..." but, to this task, even Austin Powers would fail.