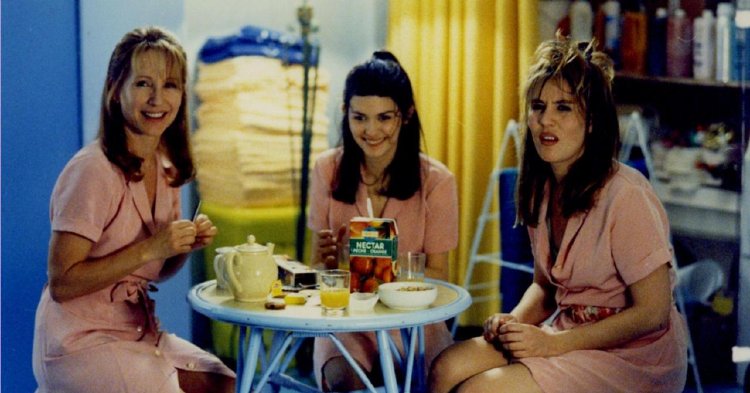 Angele (Nathalie Baye, "An Affair of Love") works at the Venus Beauty salon with her much younger colleagues Marie (Audrey Tautou) and Samantha (Mathilde Seigner, "Dry Cleaning"). Marie is a naive young girl being courted by an elderly widowed client (Robert Hossein, "Rififi"). Rebellious Samantha has too many boyfriends. Angele, emotionally hurt by a love affair which left her lover (Jacques Bonnaffe, "Lucie Aubrac") literally scarred, promiscuously seeks one night stands. Then the young and handsome Antoine (Samuel Le Bihan, "Red") insists he is in love with her and begins to follow her in writer/director Tonie Marshall's 1999 Cesar Best Film winner, "Venus Beauty Institute."

Venus Beauty is a pink and blue microcosm of female society where males hover at the periphery of its harp chiming glass door. Its chic owner Madame Nadine (Bulle Ogier, "The Discreet Charm of the Bourgeoisie") advises Angele that she should own her own salon as she 'won't be one of the girls forever,' yet Angele persists in her depressing, emotionally angry lifestyle.

Ironically, for a woman who apparently seeks no relationship ties, Antoine first falls for Angele when he observes her being dumped at a train station by a weekend lover she clearly wishes to see again. Angele treats the impassioned young man horribly, getting drunk on their first 'date.' Antoine rejects her sexual advances because of her agressive, unaffectionate manner. It's not until Angele sees Antoine speaking with Samantha in the salon that she realizes she may reciprocate his feelings. There's another hitch, though - Antoine has a 20 year old fiance (Helene Fillieres) who begins to shadow him just as he shadowed Angele.

Meanwhile, life in the salon goes on with customers such as Madame Buisse (Claire Nebout), an exhibitionist who struts her buff stuff in the reception area much to Madame Nadine's dismay and passersby's delight. Director Claire Denis is also on hand as an asthmatic massage client. Samatha fights with Nadine and becomes suicidal. Angele dissaproves of Marie's flirtation with Monsieur Lacheney until her and Antoine's spying upon the consummation of that relationship fires their own spark.

Marshall's Cesar-winning script perfectly captures the life of the salon business and spins an intriguing subplot with Marie's April/December romance. However it's main character Angele is a frustrating one - you want to reach into the screen and shake her. Her relationship with former lover Jacques is perplexing. Does she love him? Did he dump her? What keeps them from entirely breaking their bond? The ending of the film, which can be taken at face value or seen as a fantasy, is not only downright weird but terrifically unsatisfying as it makes you dislike the very conclusion you've been hoping for.

Technically, the film is terrific featuring strong art direction for the shop (Michel Vandestien, "Nobody Loves Me") and fluid camera by Gerard de Battista ("French Twist").

Acting is strong all around. Samuel Le Bihan is a shaggily appealing obsessive. Newcomer Audrey Tautou is one to watch and plays beautifully opposite veteran actor Robert Hossein, who never comes across as a dirty old man, but a courtly suitor. Veteran actress Bulle Ogier shows just the right amount of businesslike tartness peeking from behind her outward style and charm. Baye makes us feel Angele's troubled emotional state by the strain we can see around her eyes.