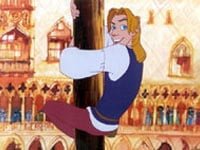 We get up for a 9 a.m. press screening at the Palagalileo of tonight's closing film.

This delightful animation is based on true stories of a common man who escapes the law by stowing away on a ship that takes him from Venice to Seville.  Getting out of a second scrape by selling his services to another departing vessel finds him, to his horror, en route to the New Land.  This entertaining and educational cartoon would make a great import, although one wonders how American children would relate to the sights of maggoty cheese and Indian children peeing into cannons, not to mention the frequent use of the word 'Bastardo!'  Those European notions of children's entertainment aside, "Johan Padan" could just as easily be the work of Disney, although the cute horse doesn't talk.  B

We break to have our last lunch at our favorite pizzeria in town (Hosteria Ai do Mati) and pay scant attention to the sounds of police cars and ambulances.  On our walk back to the Palagalileo, we discover a bus has crashed into a central island, looking like a scene from the end of "Speed!"

The last day of the fest gave us the opportunity to catch up with some films that were being repeated, although most conflicted with tonight's award ceremony press conference.

Winfried Bonengel's film, based on true life events, shows neo-Nazism being bred in East Berlin prisons.  Heiko (Christian Blumel) is a good looking innocent who follows the lead of his best friend Tommy (Aaron Hildebrand), a tough hell raiser.  While Tommy's in jail for a rebellious political act, Heiko loses his virginity to Beate (Jule Flieri), a tough bohemian who sleeps with the legendary Tommy the first night she meets him.  Tommy's plan to escape the East in a bid to go to Australia land him and Heiko in jail.  Tommy easily falls in with the neo-Nazi crowd while Heiko fends off rapists.  "Fuehrer Ex" is another disappointing competition entry.  Initially interesting, the film falls apart in a last act that would have us believe that Heiko's become a neo-Nazi leader while Tommy's become a 'live and let live' type. The film which began with a suitably punk rendition of the East German national anthem is oddly scored like an old melodrama.  This one smacks of sensationalism  C-

Actor/director Peter Mullan's ("My Name Is Joe") expose on the Catholic Magdalene Asylums of Ireland is a horrific look at sanctioned abuse. The first scene is wordless. Margaret (Anne-Marie Duff) tells a female relative she was raped by cousin Kevin during a wedding. Glances are exchanged and come full circle via the town priest. Comely Bernadette (Nora-Jane Noone) flirts with some boys in an orphanage schoolyard. Patricia (Dorothy Duffy) wails the parish priest tricks here into giving up her newborn for adoption as her parents erect steely fronts. The three all enter the Magdalene Asylum where they wash away their sins in the convent's laundry business with no pay and no contact with the outside world. Mullan, who reportedly compared the Catholic Church with the Taliban in his press conference, has fashioned an unrelenting, dramatically compelling film. These heartbreaking tales (including one even more so than the original three's - that of Eileen Walsh's simple Crispina) are relieved by a feistiness of human spirit. Geraldine McEwan ("Love's Labour's Lost") delivers an Oscar caliber supporting performance as Sister Bridget, a twisted villainous zealot with the occasional glimmer of near regret. An image of the nun reflected in the blood-rimmed eye of Dorothy, cut while having her hair forcibly shorn, embodies the film. A-

We head over to the Casino, to set up in the press conference room. A large video monitor is set up so we can watch the closing ceremony going on next door at the Sala Grande.

A Snake of June (Shinya Tsukamoto)

(The most unpopular award in the press room)

Award for an Outstanding Individual Contribution

The winners are all gracious at the press conference, but only Mullan really entertains. He swaggers in a purple kilt with his lion in one hand and a cigarette in the other. He defends his Taliban statement and says the Church owes the victims of the Magdalene Asylums restitution. He hopes his win will get people, especially young women, to see his film. He explains that he has no tartan, being of Irish descent, and that he's rented his outfit for 60 some-odd pounds for 3 days. Then he adds that he can only wear it because he's in Venice because if he wore it at home his friends would beat him up - it's the most effeminate kilt in existence. Mullan garners sincere laughter and applause, signs a few autographs and makes his way off with his lion to celebrate. This win should appease those who found last year's awarding of the Golden Lion to "Monsoon Wedding" frivolous.

Robin's Reflections:
Film festivals, especially when attended as a member of the press community, tend to be whirlwind events, screening four, five, even six or more films a day. Then, there are the many press conferences, usually in several different languages, with the sometimes poignant, sometimes-silly questions and, depending on the interviewee, occasionally some very amusing answers. The Venice Film Festival 2002 is no exception.

The two biggest challenges facing the serious film fest attendee are sleep deprivation and finding time to eat. Sleep becomes a premium item as screenings begin at 8:30 in the morning and end with a midnight showing of selected films. As such, one can count on around six fitful hours of sleep and the propensity for head snaps as you doze off in the darkened theaters toward the end of the movie going day. The super serious film buff will try to cram as many flicks as they can in the course of the day with the die hard squad taking in as many as 8 films per diem! This is where the issue of eating raises its head.

Getting sustenance during the siege of a film fest can sometimes be a problem. Fortunately, the Lido, the Venetian resort where the fest is held each year, is a compact area where food, whether to grab a delicious sandwich and a beer at the local snack wagon or partake in a multi-scoop gelato cone at a favored ice cream stand, is readily available. If the fest zombie tires of fast food and gelato sandwiches (a strange variation on the Americans ice cream sandwich) it is only a fifteen-minute walk to the Via Saint Maria Elizabeth where the concentration of restaurants and cafes reside. There, the hungry film buff can sit down to a salad and a tasty pizza or sit back and take in a multi-course meal with, of course, a decent bottle of wine.

But, the reason for attending a film festival is to see movies. Mostra, as the Venice Fest is called, is made up of several venues. The main one is the competition for the coveted Gold Lion award for best film. This year (2002) that award went to director Peter Mullan's controversial film "The Magdalene Sisters" which has generated much response from the Vatican - all of it negative. (See the complete list of fest winners on the Mostra wrap-up.)

Laura and I didn't get to attend all of the festival features but we gave a good shot at attending as many of the films as we could. In all, we saw 30 feature films in a little over 9 days, including "Nearly Heaven" only an hour or two after arriving on the Lido after 18+ solid hours of traveling (which is an epic tale of marathon travel unto itself). We ended our Venice Film Festival 2002 sojourn tired but happy to have attended. To paraphrase the line from "The Terminator" - We'll be back!