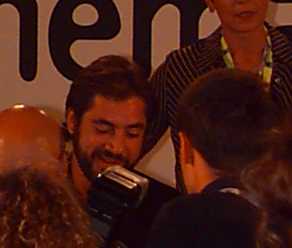 Back to the Palagalileo for an early, pre-press conference showing of

John Malkovich's directorial debut about a South American police detective, Javier Bardem's ("Before Night Falls") Rejas, hunting down a revolutionary guerilla leader while falling in love with Yolanda (Laura Morante, "The Son's Room"), his daughter's dance instructor, is merely okay. The Nicholas Shakespeare script is clearly indebted to the works of John Le Carre. Bardem gives a restrained performance in this character study, but the love story springs out of nowhere and the wife the script saddles him with is entirely implausible. B-

Director Lee Chang-dong tries to convince us that he didn't set out to make a love story between handicapped people, but two ordinary people. Moon So-Ri explains how she worked with her director for two full months to get the physicality of her part right and attained a group of friends with cerebral palsy in the process. 'Love tells us what the limits are in all things,' she states.

Malkovich is back wearing the same odd suit he wore a week before for the "Ripley's Game" conference. He talks about the difficulty of getting his film made and that he wanted non-native English speakers for his leads because he likes hearing English spoken with an accent. Laura Morrente claims to be more comfortable with body language than English, explaining that saying "Te Amo" causes her to emote whereas "I love you" is meaningless. Javier Bardem is a surprise - I was expecting a compellingly good looking, intense actor and got a charming goofball. Bardem relates that he uses directors as a parental substitute and that Malkovich weaned him of that. He says he loves Venice because he calls for a taxi and a boat comes. He ends several comments by declaring what he just said was stupid.

We lug our press material to the postal booth outside the Casino to see about shipping everything home, as we'll be travelling in Italy for another 9 days after the festival ends. Our 15 kilos of material would cost 85 Euros! (about the equivalent in US dollars) to ship at the cheapest rate. We decide to line the bottom of our suitcase with it instead, then pack up for the day and head into Venice mainland.