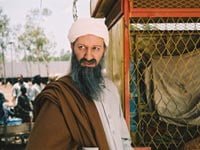 We sleep in, missing the 8:15 a.m. screening of "My Name is Tanino," but we'll still see five films today. We head back to the Palagalileo at the more leisurely time of 10:45 for

Manijeh Hekmat's debut feature film harkens back to Warners Brothers' 1950 classic "Caged" (dir. John Cromwell).  Idealistic Tahereh Yousefi (Roya Taymourian) arrives at a women's prison to quell revolts.  She meets Mitah (Roya Nonahali), a young girl in prison for saving her mother by killing her stepfather.  As three generations of women pass through the prison, some executed, some freed, we observe the society and injustices of the prison through its inmates and Iran's changing politics via their wardens.  Pegah Ahangarani is a standout, playing three different young women, but it's the slowly cooked relationship of Nonahali and Taymourian's characters that ground the film.  B

This outstanding omnibus is a French production featuring a short film from 11 global filmmakers. Their only guidelines were that the film be a reflection on 9/11 and that it be 11 minutes, 9 seconds and 1 frame in length.

Samira Makhmalbaf (Iran, "Blackboards") leads with a a schoolteacher trying to relay the meaning of 9/11 to her Afghani refuge students. Their innocence is charming and Makhmalbaf's final image, of the children gathered for a moment of silence beside a smoking kiln tower, is haunting. A

Claude Lelouch (France, "A Man and a Woman") looks at the event through the crumbling relationship of a deaf woman and her lover. B+

Youssef Chahine (Egypt, "Cairo Station") casts an actor as himself, then has a discussion with the ghost of American soldier killed in the Beirut bombing. Chahine explains why a Middle Eastern Muslim would see a regular American citizen as a valid target - because that citizen lives in a self-elected democracy. C+

Danis Tanovic (Bosnia-Herzegovina "No Man's Land") parallels the event with the tragedy of Srebrnica in Bosnia and the women who demonstrate on the 11th of each month. B

Idrissa Ouedraogo (Burkina Faso, "Afrique...Mon Afrique") wins for originality for his comedic tale of a group of young boys who try to capture Osama Bin Laden in their homeland for the $25 million reward, while also making social commentary. A

Ken Loach (Great Britain, "My Name Is Joe") has a Chilean write a letter to the people of New York, empathizing with their tragedy by the Tuesday, 9/11 in 1973 when his President Allende was assassinated followed by the murder of 30,000 civilians. Loach uses George Bush's words to indict U.S. involvement. A

Alejandro Gonzalez Inarritu (Mexico, "Amores Perros") uses a black screen and the sounds of the day in a horrifying montage occasionally jolted by a split second vision of a plane hitting the towers or a body tumbling from them. A

Amos Gitai (Israel, "Kippour") does a cinema verite piece following a news team at the aftermath of a Jerusalem bombing whose airtime is eclipsed by news from New York. B

Last year's Golden Lion winner, Mira Nair (India, "Monsoon Wedding") tells the true story of a missing man suspected of being a terrorist who turns out to have been a hero through the eyes of his mother. This one is emotionally uninvolving. C

Sean Penn (USA, "The Pledge") tells the tale of a lonely widower (Ernest Borgnine) realizes the wife he still speaks to every day is dead when the towers' falling lets light into his apartment. Borgnine's terrific in this unexpectedly personal entry from Penn. B+

Shohei Imamura (Japan, "Warm Water Under a Red Bridge") delivers a head-scratcher about a Japanese WWII veteran who thinks he's a snake. The relevance of Imamura's piece is too broad. D+

Television crews wait the packed press/industry crowd for their reactions as we exit the theater.

The Tracker (In competition, Venezia 59) Australia

Rolf de Heer ("The Quiet Room") tells a simple story about a complex man.  A fanatical British officer (Gary Sweet) leads a new recruit (Damon Gameau) and a drafted veteran (Grant Page) into the Australian outback circa 1922 to hunt down a murderous Aborigine (Noel Wilton), but the men are really being led by their Aboriginal tracker (David Gulpilil, "Walkabout"), who hides his agenda well.  de Heer wrote the lyrics to ten original folk songs which beautifully complement the mostly visual film.  Sweet is villainous to a fault and Gameau adroitly provides naivety, but veteran actor Gulpilil's the one to watch.  B

La Forza del Passato ("The Power of the Past") (In competition, Venezia 59) Italy

Children's fantasy writer Gianni (Sergio Rubini, "The Talented Mr. Ripley") shows no emotion when his father dies - the rebellious communist hated his father's Fascist military career and emotional standoffishness.  Enter Bogliasco (Bruno Ganz, "Wings of Desire"), a man Gianni takes for a nutcase, to tell Gianni that his father was, in reality, a lifelong spy.  Piergiorgio Gay's film was one of the weakest of the films in competition.  The use of fictitious literary characters to mirror father/son relationships has been done, and done better (1984's "Cloak & Dagger"), before.  Not even the great Ganz can elevate this offering, due to an unsympathetic main character, although the punk-charged rock soundtrack is noteworthy.  C

Director Stephen Frears ("High Fidelity") and screenwriter Steven Knight take a look at London's illegal immigrants and the evil that preys upon them.  Hardworking Nigerian Okwe (the charismatic Chiwetel Ejiofor) is a cabbie by day and a hotel receptionist by night.  When he finds a human heart in a hotel room toilet, Okwe will go on a grueling journey through London's dark underbelly before attaining his dream.  "Dirty Pretty Things" takes the legend out of the urban tale of kidney stealing in hotel rooms.  Audrey Tatou ("Amelie") is well cast as a Turkish girl in love with Okwe, but she's little more than damsel in distress.  Sergi Lopez ("With a Friend Like Harry") is gleefully nasty as Russian black marketeer and Benedict Wong is dryly funny as Okwe's bemused mortician attendant buddy, but its Sophie Okonedo who provides the sprightliest support as Juliette, a down to earth hooker.  B

The screening is interrupted by cries for a doctor, although we never do learn what has happened.