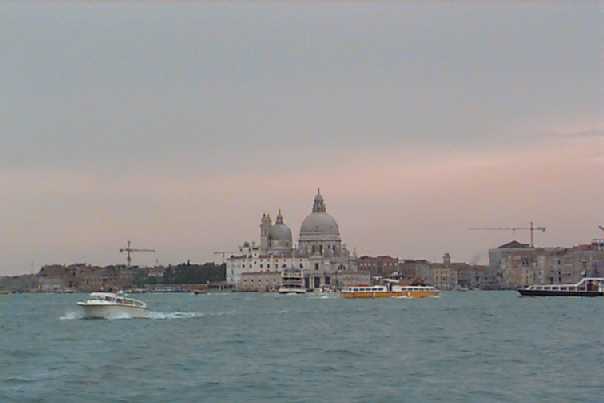 A quick morning jog over to the Pala BNL for an 8:30 screening. Jury president Gong Li ("Raise the Red Lantern") takes a seat directly to our right, much to Robin's delight (Li and Deneuve in one trip - if Penelope Cruz had been there, Robin would have died and gone to heaven).

Sergei Bodrov's ("Prisoner of the Mountains") English language international coproduction is a road movie that follows fourteen year old Lola (Rebecka Liljeberg, "Show Me Love") and her trained bear, which happens to shapeshift into her lover Misha (Sergei Bodrov Jr., "Prisoner of the Mountains").  Lola suffers losses as her mother Carmen (Ariadna Gil, Lola in "Virgin of Lust") abandons her, her father figure Marco (Maurizio Donadoni) dies in a motorcycle accident and Lou (Keith Allen, "24 Hour Party People"), her new protector, rapes her.  When Mischa himself is imperiled, Lola plots an escape for them both that takes her on a road she'd never dreamed of.  This fairy tale, featuring the celtic music of Canadian Loreena McKennit, is at its best when focusing on the circus performances. Liljeberg plays Lola sullen, deadened by circumstance, and the character fails to engage.  Bodrov Jr. is believable as the shapeshifting bear. Donadoni gives a touching perf and Allen is malevolently entertaining.  B-

We jaunt over to the Palagalileo for

This lovely film focuses on a love triangle with a backdrop of a post-war China on the brink of radical change.  Returning from the war, a young doctor, Zhang Zhichen (Xin Baiqing) visits his closest friend in his crumbling ancestral home.  Dai Liyan (Wu Jun) is sickly, living off his inherited wealth.  His 8 year old marriage to Yuwen (Hu Jingfan) is also crumbling as his health has affected their sex life.  As Zhichen concludes that Liyan's problem is psychosomatic, Yuwen tries to recreate the heat of a former relationship unknown to her husband while his little sister Xiu (Lu Sisi) also develops an attraction to the handsome doctor.  Director Tian Zhuangzhuang ("The Blue Kite") gets extraordinary results from his cast, all making their feature film debuts. While his blocking of the old lovers leans to overt melodrama, on the whole the film is subtle, particularly in Wu Jun's beautifully restrained performance.  A scene where the four float down a river in a boat while little sister stands and sings a song to springtime is a standout worthy of Renoir.  B+

A power failure compounded by an incorrect reel change during this film has thrown off our planned schedule, so against all instincts we change plans and head to the Sala Grande for the (completely packed) premiere of

Thoroughly vile!  It's hard to come to terms with the fact that the man who shot the magnificent "Far From Heaven" (Ed Lachman) also coshot and codirected (with Larry Clark of "Kids" and "Bully" fame) this piece of exploitative button pushing.  The fact that "Kids" screenwriter Harmony Korine was involved seemed promising, but "Ken Park" is reprehensible. This time Clark once again finds his young cast on the streets, but brings parents into the picture with such actors as a 'what-was-she-thinking' Amanda Plummer.  Apparently everyone in the town of Visalia, CA is doomed as kids sleep with their girlfriend's mothers, practice autoerotic asphyxiation live and on camera (definitely not good til the last drop), fathers abuse the sons they find effeminate, girls rebel against dad's obsessive Catholicism with kinky sex games and serial killers in the making slaughter loving grandparents.  Everything is staged to shock. The one funny visual joke, of a man drinking beer while peeing, is ruined by the need for tracking shot which stops on a closeup of his leaking member.  The film *only* gets points for the naturalness of the ensemble acting.  It galls me to think that other nations might believe this is what American youth is really like.  D-

Before the film I overheard an amusing comment.  A young English journalist told a newfound Italian colleague 'I love watching films about f*&cked up Americans.'

We stay at the Sala Grande for the premiere of

Un Homme sans L'Occident ("A Man without the Occident") (In competition, Upstream) France

Director Raymond Depardon's unique film is based on the Diego Brosset novel about the life of the last free man of the Sahara at the turn of the last century.  Depardon's stunning black and white cinematography put us into the desert via the eyes of one of its denizens to see a world unknown to most of us.  However, Depardon's story telling ability doesn't match his visuals.  Narration which refers to the source novel downgrades the film into a book-accompanying pictorial and the latter part of the film is difficult to follow.  Still the film's worth a look for the eye-popping vistas it presents.  B-

Time for a dinner break before heading to the Palagalileo for a 9:45 p.m. screening of Takeshi Kitano's latest

Kitano's obviously popular in Italy as his name on the screen prompts cheers and clapping from the press/industry crowd.  "Dolls" is an omnibus film.  The first part finds a young man, Matsumoto (Hidetoshi Nishjima) ditching his boss' daughter at the altar to return to his true love, who's been driven into a mental hospital by his actions.  Sawako (Miho Kanno) remains mute and childlike as they gradually become homeless, tied together by a long red cord to keep Sawako from wondering off.  Hiro (Tatsuya Mihashi) is an underworld boss who years for the days when an abandoned lover met him daily with a boxed lunch.  He returns to the park decades later to find her (Chieko Matsubara) still maintaining the ritual, although she doesn't recognize him.  Nukui (Tsutomu Takeshige) is one of Haruna's (Kyoko Fukada) biggest fans.  When the pop star loses an eye in an accident and withdraws from public life, Nukui blinds himself in order to attain a meeting with her.  "Dolls" was inspired by Japanese Bunraku, sophisticated puppet performances.  The film looked gorgeous and was enthusiastically received, but it dragged and its point was lost on me.  I yearn for the days when Kitano was more interested in killing people with chopsticks.  C

After a decade of being blacklisted in China for his stance against human rights violations, helmer Tian Zhuangzhuang makes a comeback with his remake of the 1948 pre-Mao romance, “Springtime in a Small Town.”

Dai Liyan (Wu Jun), the last remaining son of a well-to-do family in post-WWII China, suspects he has TB. His life with his arranged marriage wife Yuwen (Hu Jingfan) has suffered because of his illness and they have taken to sleeping separately in the habitable part of their war-ravaged estate. When his best friend Zhang Zhichen (Xin Baiqing), a doctor, returns to the town after a decade away, he is shocked at his Liyan’s condition and even more shocked to learn that he is married to Yuwen, Zhichen’s sweetheart long ago. The lives of the three become intertwined and a near tragedy alters all their lives.

Tian creates a beautifully crafted romantic triangle and gets first rate performances from his inexperienced newcomers. Coupled with the fine acting are superb tech credits, especially the production design (Cheng Guangming) that captures the once grand elegance of the war-torn family manse and the fluid richness of the lensing by Mark Lee. The actors are irresistible and, watching them, the viewer is conflicted as to who to favor. It’s a quiet, thoughtful and beautifully wrought film.