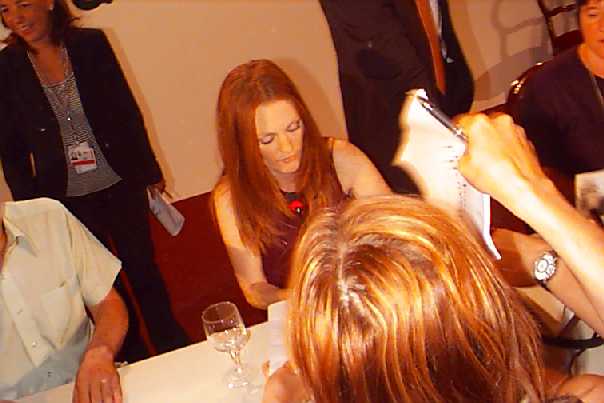 The first of two John Malkovich films and what will turn out to be a number of prize winners...

Italian director Liliana Cavani ("The Night Porter") looks at Tom Ripley decades after his initial descent into evil.  John Malkovich is perfectly cast as the amoral epicurean, now living grandly in a Veneto villa with his harpsichordist wife (Chiara Caselli, "My Own Private Idaho").  When the terminally ill village framer (Dougray Scott, "Ever After") throws a birthday party for his son, Ripley overhears an insult.  For revenge, he points his former colleague Reeves (Ray Winstone, "Sexy Beast"), in need of a hit man, to the destitute and dying Trevanny.  Ironically, Trevanny's eventual plight reveals in Ripley something thought to be long lost - humanity. Liliana Cavani's suspense thriller harkens back to the cold war thrillers also evoked by this year's "The Bourne Identity," but she's a lot more playful.  A scene where Malkovich dispatches not one, but three, Eastern mobsters in a train lavatory is both tense and hilarious - one of the highlights of the fest.  This is Malkovich's best performance since playing himself.  Winstone's grubby gangster also gets some laughs, although his character isn't very deeply defined.  Scott displays little more than harried confusion, but Lena Headey is fine as his suspicious wife.  B

John Malkovich gets nervous laughs describing Ripley's murderous rationale - perhaps he's just a little bit too convincing?  If he added a Panama hat to his elegant cream colored suit he could also pass for Hannibal Lecter. Co-star Dougray Scott seems to be suffering from jet lag.  Unfortunately, I neglected to obtain a translator to hear director Cavani's remarks which were all in Italian.

Todd Haynes and Julianne Moore are both genuine and gracious accepting many compliments from press members.  A Taiwanese journalist tells Haynes he's saved the Venice Film Festival.  Haynes discusses his influences, saying that although the homosexuality displayed in his film wouldn't have been possible in Sirk's time, that Sirk's casting of Rock Hudson in many films can be regarded in a new light now.  Moore expresses gratitude to Haynes for having written a second movie for her (they first collaborated on "Safe").  She regards her character of Cathy as an expression of American optimism after being surprised by how much she smiled after she'd seen the film.

Back to the Palagalileo for a 3 p.m. film.

Writer/director Lu Chuan's story of small town policeman (Jiang Wen, "Red Sorghum") who can't find his gun after drunken celebration of his sister's wedding sounded intriguing, but ultimately disappointed. Chuan borrows English director Guy Ritchie's kinetic style and establishes his cast of characters in quick order.  Ma Shan's already in trouble when he reports the flaw on his sterling record to authorities, but when his missing gun becomes a murder weapon, he must clear himself as a suspect.  The climatic revelation of who's responsible seems plucked from the air, but Chuan's theme of memory reconstructed from external eyewitnesses is intriguing.  "The Missing Gun" has its moments and Wen is intense.  C+

Over to the Pala BNL tent for the weirdest experience of the festival.

Rokugatsu no Hebi (A Snake of June) (In competition, Upstream) Japan

Tetsuo director Shinya Tsukamoto takes his audience on a surreal trip with his heroine Rinko (Asuku Kurosawa), whose sexless marriage to the much older Shigehiko (Yuji Koutari), a cleanliness compulsive, causes her to pursue her fantasies on her own.  Then she receives photographs of her private moments followed by a phone call from the photographer (Tsukmoto, who also shot his film) demanding that she act out her fantasies in public.  This wildly erotic and disturbing film features one breathtaking image after another in glorious black and white, accompanied by a rattling sound design. Tsukamoto has matured since his Tetsuo days and proves more subtly disquieting than younger countryman Takashi Miike ("Audition").  Kurosawa bravely bares all.  The festival catalog's synopsis of the film is a hoot.  A-

"Ripley's Game" starts out as a revenge yarn when Jonathan Trevanny (Dougray Scott) makes disparaging remarks about his eccentric neighbor, Tom Ripley (John Malkovich). Ripley sets Jonathan up to perform a contact killing for sleazy gangster Reeves (Ray Winstone) in return for $50000 and treatment for his leukemia. But the revenge soon turns to a mentor/student relationship as a bond develops between these two very different men in director Liliana Cavali's modern adaptation of the Patricia Highsmith novel.

John Malkovich is perfect for the role of the talented Mr. Ripley 20 years after his introduction to the good life - a life he enjoys no matter what it may cost someone else. Tom is suave, educated with excellent tastes and a ruthless and, if necessary, murderous nature. The story is updated to the present day and handles the period change well. Ray Winstone is terrific as Tom's former partner, Reeves, and reminds of Bob Hoskins in his gangster flicks. I give it a B.

"The Missing Gun" begins in a fast paced flurry of manic action, a la Guy Ritchie's gangster flicks, as Chinese police officer Ma Shan (Jiang Wen) wakes the morning after attending a wedding to discover his gun is missing. The initial rush of activity soon slows to an almost plodding pace as Ma Shan discovers previously unknown intrigues in his small town and must hurry to recover his sidearm before mayhem ensues. If helmer Lu Chan had kept the frenetic initial pace "The Missing Gun" may have been an achievement but as it gets bogged down in its intrigues interest begins to wane. I give it a C.

The director of "Tetsuo, the Iron Man" blindsides the Venice Film Festival with his voyeuristic tale of a woman mired in a marriage with a man so obsessed with cleanliness he won't touch his wife, not even sharing the same bed. She works for a county mental health center as a counselor and is stalked by a voice on the phone that threatens to reveal her secret desires. Shinya Tsukamoto continues his bizarre, surrealistic examination of the human psyche in an enthralling yarn that occasionally makes you squirm but to also appreciate the deft manner in which he uses beautiful, disturbing imagery to make his point. I give it a B+.