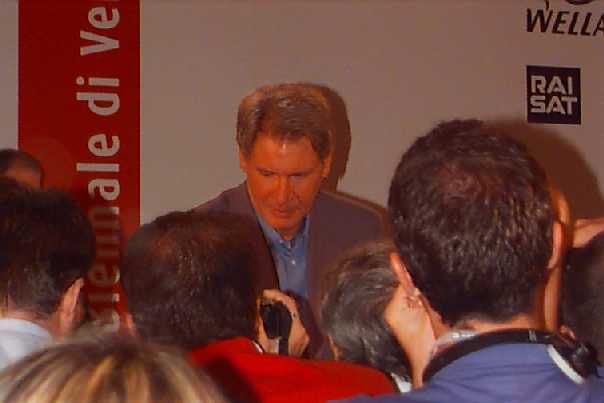 Started the day late in the Casino for press conferences. Director Andrei Konchalovsky was enthusiastic and charming during his conference for "Dom Durakov" ("House of Fools"), particularly when explaining the childlike need to have his film be recognized in the competition. Next up was "K-19: The Widowmaker" with statuesque (and surprisingly soft spoken) director Kathryn Bigelow and stars Harrison Ford and Liam Neesan. All claimed no knowledge of charges by Russian survivors of the disaster that they were not portrayed accurately. Bigelow made a gracious statement about healing old cold war wounds. Neesan passionately professed his pride in the film. Ford laughed off questions about U.S. box office and got churlish about press interest in Calista Flockhart, who accompanied him to the Lido. Note to Ford - your Indiana Jones days are definitely over.

After clearing up a press pass miscoding that impacted our ability to videotape in the press conference room, we headed over the Pala BNL, a huge, tented venue off the main drag that seats 1700 for the first film of the day at 1 p.m.

Claire Denis' ("Beau Travail") new film is a beautiful mood poem about Laure (Valerie Lemercier, "Les Visiteurs") in transition from her single apartment to a shared life.  Stuck in evening traffic , Laure is cocooned within the world of her car and its radio.  Gradually she becomes aware of the world around her (gorgeously shot by Agnes Godard, who also shot competitor "Au Plus Pres du Paradis").  She picks up a stranger, Jean (Vincent Lindon, "Pas de Scandale"), and her evening takes unexpected turns.  Although not well received in general, I loved the mood Denis evoked with images and music (Dickon Hinchliffe, whose band Tinderbox scored Denis' last film, "Trouble Every Day") alone.  Dialogue in "Vendredi Soir" is definitely incidental - pure cinema, a lovely film with three brief touches of whimsy.  B+

Back to the Palagalileo for the rest of the day.

Meili Shiguang ("The Best of Times") (In competition, Venezia 59) Taiwan

Chang Tso-Chi's film begins like a comedy about an extended family but turns into a reflection on the tragedy that befalls cousins Ah Wei (Fan Wing, who also narrates) - 'I'm happy, well grounded, not much of a dreamer' - and Ah Jie (Gao Meng-Jie), a funny but troubled youth whose first job puts him in touch with a gun.  Family patriarch, Ah Wei's dad, is goaded by granny about gambling away the family's money while Ah Jei's father repetitively recounts his dishonorable discharge from the army decades earlier. The two men spend their evenings getting drunk, suggesting that Ah Wei and Ah Jei's fates may have been better met young.  Tragedy also befalls Ah Wei's twin sister who suffers from leukemia, but Tso-Chi uses expressionistic, slightly comic allegory to end his film on an up note.  Thio Hugo P.'s Spanish Western guitar score rocks.  B

Break for dinner in town - Denis' smiling anchovy pie has made me crave pizza a la romana.  Unfortunately, eating caused us to miss Konchalovsky's film, which sounded like a remake of the 1966 French film "King of Hearts," a bit too twee for my tastes, but the film was very well received and I regret missing it.

Spiro Scimone (who also wrote) and Francesco Sframeli's delightful first feature is a reflection on a male friendship that develops between opposites. Nunzio (Sframeli) is a naive soul who loses his job at a paint factory when the fumes result in a constant hacking cough.  He acts like a wife to Pino (Scimone) is a taciturn man who puts up with Nunzio's constant questions regarding the train journeys he makes whenever a parcel of fish is delivered to their door.  Gradually, Nunzio's queries about such things as sleeping with or without socks in train compartments imbed themselves in Pino and they reverse roles as Pino begins to care for Nunzio in his ill health. The film isn't original and sometimes sidetracks too far to attain whimsy, but on the whole "Two Friends" is a charmer.  B-

Todd Haynes explores sexual and racial discrimination and repression in 1950's Hartford, CT in his ode to Douglas Sirk and actress Julianne Moore. When perfect housewife Cathy (Moore) discovers her ad exec husband (Dennis Quaid in a 180 from his "The Rookie" role) in a clinch with another man, she tries to save their sexless marriage via counselling, but finds herself drifting into a relationship with her black gardener (Dennis Haysbert). Suddenly Hartford's perfect hostess is the subject of a scandal that even her best friend (Patricia Clarkson) recoils from. Haynes walks a fine line that explores melodrama to the very edge of camp, but attains a real emotional wallop. Moore is perfection, Quaid slips in subtle effeminate touches (particularly when drunk) and Haysbert is the essence of gentility. Clarkson is top notch as the country club pal as is Viola Davis as the Whitaker's made. Celia Weston and Bette Henritze do a lot with little screen time as the town gossip and society columnist respectively.

Production design (Mark Friedberg) and costuming (Sandy Powell) are to die for and all is beautifully framed by Lachman's camera. Elmer Bernstein's score, like all other tech credits, harkens back to another age. While "Far From Heaven" is most reminiscent of Sirk's "All That Heaven Allows," I only was reminded of "Peyton Place" and "Beyond the Valley of the Dolls'" New England autumns. My pick for the golden lion and favorite of the festival. A+

We head over to the Sala Grande to catch the star-studded arrivals for the midnight showing of "K-19: The Widowmaker" for Reeling. Liam Neesan arrives with the radiant Natasha Richardson, followed by Bigelow in elegant flowing black. The crowd screams only for 'Ally! Ally!' though, as Harrison Ford escorts Calista Flockhart up the red carpet.

To bed late, but up early - 8:30 screening before the film's press conference tomorrow!

Helmer Claire Denis bounces back from her disastrous "Trouble Every Day" with her latest visual poem "Vendredi Soir" (Friday Night). This story of a brief, romantic encounter in Paris amidst the stranglehold of a transit strike pushes two people from different walks of life together for a single evening of love and tenderness.

It is Friday evening and Laure (Valerie Lemercier) has packed her belongings to move in the next day with Francois. She leaves her flat for the last time but gets stuck in a massive traffic jam that cripples the city. She is taken by a Good Samaritan urge and offers a man, a stranger (Vincent Lindon), a ride to get out of the frigid cold. Quietly, with very few words, the couple pulls away from the traffic snarl and have dinner together. They are drawn toward each other and decide to spend the night in each other's arms. The short, loving interlude represents the transition that Laure needs as she leave her solitary life as a single woman.

This quiet, poetic film uses its limited dialog in the most perfunctory way - to order a meal or get a hotel room - as the two strangers come together in what is truly a brief encounter. The visual style of lenser Agnes Godard complements the grace of Denis's and novelist Emmanuele Bernheim's adapted screenplay, making this a sweet tale of a romantic interlude. I give it a B.

Writer/director Chang Tso-Chi, in "Meili Shiguang" (The Best of Times) begins his tale in the suburbs of Taipei following a young man, Wei (Fan Wing), and his best friend Jie (Gao Meng-Jie). Wei works as a valet at a nightclub owned by gangster Brother Gu. When Wei is promoted to the job of debt collector he persuades the mobster to give Jie a job, too. Gu gives them a gun and a single bullet. This inauspicious gift proves to be the downfall of the two friends as the gun changes their lives forever in this multifaceted little tale. I give it a B-.

Silver screen newcomers, co-helmers Spiro Scimone and Francesco Sframeli, take Scimone's stage play and film adaptation and bring us a Sicilian version of "The Odd Couple." Nunzio (Sframeli) works in a paint factory and shares an apartment with Pino (Scimone), a man who makes mysterious journeys away from home following the delivery of a bag of fish. The pair communicates very little, sometimes only to discuss dinner, but the relationship undergoes a change when Nunzio loses his job and falls for a pretty young woman. These events result in a metamorphosis between the roommates that draw them together and change their relationship forever. I give it a C+.

In the tradition of such Douglas Sirk family melodramas as "Imitation of Life," helmer Todd Haynes has created a work of art in "Far From Heaven" (the best film in the 2002 Venice fest, in my opinion), the picture of suburban family life in upper middle class America during the 50's. Julianne Moore stars as Cathy Whitaker, a homemaker, wife and mother to husband Frank (Dennis Quaid) and her two growing children. Cathy lives an idyllic, liberal life and is perfectly happy with her home, family and friends. But, there are cracks in the façade of this perfect existence that come to the surface when she catches Frank in the arms of another... man! She finds solace in the friendship and respect of her gardener, Raymond Deagan (Dennis Haysbert), a black man, but soon finds herself the subject of ridicule and scorn by those she considered her friends. All aspects of this film, from acting and direction to costume and camera, are done with obvious loving care. I give it an A.