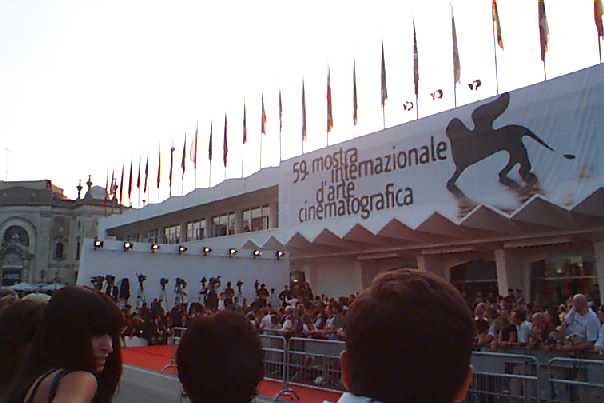 Made our way to the Sala Grande, where all the glitzy premieres take place and took seats in the balcony. As a giddy, excited young American made his way to a seat to our right, Robin commented 'that must be the director.' Bingo - Massachusetts native Dylan Kidd was clearly thrilled to be there.

Although not in competition, "Roger Dodger" is a lot more like it!  This jangly, in your face film is a terrific American independent character study of an ad exec (Scott Campbell) who's so used to 'making people feel bad about themselves in order to sell them what they need' he doesn't recognize the destruction he leaves in the wake of his personal life.  Just as the needy Roger is hitting rock bottom personally and professionally, his 16 year old nephew (Jesse Eisenberg) arrives unexpectedly, looking for life lessons from the infamous ladies' man.  Kidd gets terrific acting (Isabella Rossellini, Jennifer Beals and Elizabeth Berkeley all make significant contributions), from his ensemble cast working from his razor sharp script (Kidd credits Scott for his dialogue and editing contributions) which only errs with an ending that's too feel good to be true.  Hand held camera, kinetic editing and nightspot locations identify "Roger Dodger" as an edgy New Yorker.  B+

The house lights came up to reveal the late appearance of the "Showgirl" herself, Elizabeth Berkeley, in a dazzling white pant suit.

Staying in the Sala Grande, next up was the premiere of

Kristijonas Vildziunas refreshingingly features a middle aged woman (Larisa Kalpokaite, resembling AbFab's Jennifer Saunders) as his central character, but his film feels like a Kieslowski wannabe.  A successful businesswoman strikes out on her own and has an affair with a handsome younger man after her ex-husband moves in with her daughter.  Her lover turns cold when she buys her own place instead of renewing her lease.  Presumably an allegory about the illusory qualities of freedom in a post-Communist society, "The Lease" makes little sense until its climax, which plays like "A Short Film About Love" without the emotional impact.  Kalpokaite gives a strong performance nonetheless.  C+

Mexican auteur Arturo Ripstein ("Deep Crimson") combines the Mexican wrestling film, Gilbert & Sullivan, old time Hollywood coming attractions, Franco/Republican politics and the musical for a unique offering with glossy style and a plodding pace.  Just as I was noting that the film felt like 'a musical without the music,' four actors break out into song at the 60 minute mark.  Ignacio "El Mikado" Jurado (Luis Felipe Tovar, "The Mexican") is a Mexican waiter who blindly loves Lola (Ariadna Gil, also appearing in "Bear's Kiss"), a heartless prostitute who is in turn with a famous wrestler who spurns her affections.  Beautiful production design and terrific performances can't make up for the slow route to the inevitable conclusion, although the political backdrop provides a most amusing method for El Mikado to win the woman of his dreams.  B-

At this point, we realize that every film we've seen has featured lots of cigarette smoke and women's feet - a theme for Venice 59? 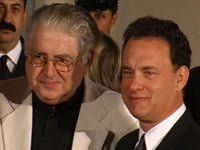 The rest of the day was spent getting video coverage of Catherine Denueve's arrival for her premiere and Tom Hanks red carpet walk into "Road to Perdition" for Reeling's Venice special. The celebrity arrivals are preceded by Gershwin blaring out over loudspeakers, which whip the crowd into a frenzy of excitement, although there are numerous false starts. Controversial Fest director Moritz De Hadeln paces the red carpet waiting to receive his guests. At dusk, the glamorous Deneuve, in navy sequins, played to the cameras and barely to the crowd. Three hours later, thousands were jammed along the Lido screaming 'Tom!, Tom!' as mosquitos thickly swarmed (I counted thirty-two bites - all for about 3 minutes of footage). Diminutive, silver maned ratings board head Jack Valenti strolled the red carpet and then the man himself arrived. Hanks posed for photogs, graciously pulling director Sam Mendes into the shots, but also addressed the crowds and signed autographs. Wonder if I'll ever be able to watch Tom Hanks again without scratching, though.

Newcomer director/writer Dylan Kidd teams up with Campbell Scott in an oddly affecting tale about coming of age. Scott is the title character, a highly intellectual, self-centered, selfish guy whose life revolves around drinking and womanizing. His inflated ego gets him in trouble with his boss and lover (played by Isabella Rossellini) when his teenaged nephew Nick (Jesse Eisenberg) arrives on the scene. Nick tells his uncle that he is in the Big Apple for a college interview at Columbia and asks Roger to show him around the city.

Roger takes the request to heart and decides to use the time to educate Nick in the ways of women and love, with his goal to get the young man laid. He secrets the boy into a local bar where they try to woo a pair of over-30 ladies (Elizabeth Berkley and Jennifer Beals) on a hunt of their own. The dames catch on quick to Roger's spiel but both take a liking to Nick and try to convince the teen to dump his uncle and come with them. Loyalty requires that the boy stick with his uncle and the quest continues.

Slick production values and razor-sharp dialog (with Scott credited as a significant contributor) make this a terrific debut for new talent kid. The ladies help flesh things out considerably and Eisenberg gives a surprisingly mature performance but, in the end, Campbell Scott owns the film. I give "Roger Dodger" a B+

This thoughtful little film from Lithuania (written/directed by Kristijonas Vildziunas) delves into the politics of change facing that liberated country through the eyes of its protagonist, the Woman (Larisa Lalpokaite). She is a member of the burgeoning middle class that began with the fall of the Soviet empire, a class that is struggling with shaking off of the former soviet class structure. The Woman, a member of the new class and a successful businesswoman, finds that the newfound freedoms in her country come at a cost - the outward freedom does not erase the inner turmoil developed over the years under the yoke of Soviet rule.

"The Lease" requires the viewer to pay close attention as the struggles of the Woman, and by extension the rest of her middle class society, are examined in the new light that came about with the fall of the Iron Curtain. It may be an effort for some westerners to understand the film as there are no familiar reference points to hang onto. I give it a C.

Mexican director Arturo Ripstein creates a near surrealistic world that revolves around a Native American waiter named Nancho (Luis Felipe Tovar) who has an unrequited love for a local prostitute, Lola (Ariadna Gil). She disdains Nancho, but will readily accept his gifts and attention while lusting after the masked wrestler named Gardenia who spurns her attention. This little "romance" takes place during the time of Generalissimo Francisco Franco establishing his stranglehold on Spain.

The story consists of many layers and travels down many paths with Nancho's unrequited love for Lola; her disdain for him and everyone else (except for masked Gardenia); the arrival of Spanish anarchists who sit around the café talking a good fight over the overthrow of Franco but are, in fact, just talk. The look of the film is crisp and looks great. The introduction of musical numbers well into the film's runtime give it a disjointed feel while the "coming attraction" sequences give it a funky style. The techs are stronger than the story and its structure but some solid acting garners "La Virgen de la Lujuria" a B-.