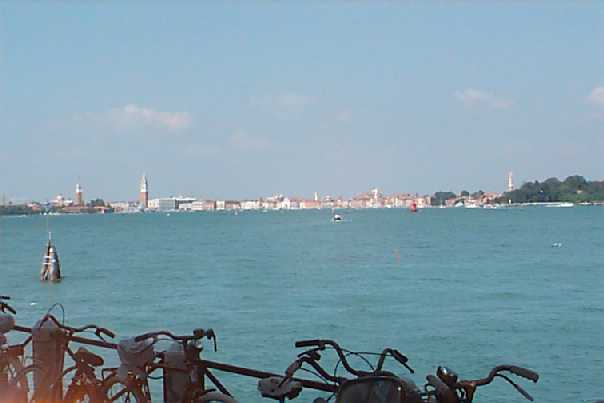 The Venice Film Festival is the oldest festival in the world, begun at Venice's Lido beach resort in 1932 by Count Giuseppe Volpi di Misurata, the President of the Biennale.  The first film shown was Rouben Mamoulian's "Dr. Jekyll and Mr. Hyde."  By 1934, the festival was competitive, with over 300 journalists in attendance, although the prize was first known as the "Coppa Mussolini."  The current Golden Lion award has been responsible for bringing such greats as Akira Kurosawa's "Rashomon," and Japanese cinema in general, to world attention.  This year, the Biennale hired former Berlin fest director, Moritz de Hadeln, to liven up the event. De Hadeln did a fabulous job pulling together a festival in only six months, but has stirred up a wave of controversy with his comments that Venice's Golden Lion has lost its lustre.  It remains to be seen whether De Hadeln will direct the 2003 festival.

Eighteen hours of travel (2 flights, 2 cab rides, bus link between Heathrow and Gatwick and a water taxi) land us in Venice the afternoon of day 2 of the 59th Venice Film Festival.  We have an apartment three blocks from the Casino where all the action is headquartered on the Lido beach.  After checking in at the press office, we head to our first film at 5:15 p.m. in the immense Palagalileo theater which is reserved almost exclusively for press and industry screenings.

Director Tonie Marshall's ("Venus Beauty Institute") film is romance created for French film icon Catherine Deneuve.  Fanette is obsessed with the film "An Affair to Remember," but not with Pierre (Patrice Chereau), the man who obviously loves her.  Work requires a trip to New York City that coincides with a note that may be from Philippe, Fanette's ideal love, suggesting a meeting at the top of the Empire State Building.  New York introduces Matt (William Hurt), a passionate photographer that Fanette resists while holding onto her Empire State fantasy.  "Au Plus Pres du Paradis" is little more than a vanity project for Deneuve, but the film gets a huge jolt from William Hurt's surprising performance, which staved off extreme jet lag.  C

A French film with Italian subtitles accompanied by much smaller English subtitles scrawling across a monitor below the screen was all we could take after a day without sleep, so the 7:45 p.m. screening of "Roger Dodger" was bypassed for the 9:45 a.m. one the next day.

Catherine Deneuve stars as Fanette, a middle-aged beauty who lives in the past when her lover, Philippe, and her love for the romance classic, "An Affair to Remember," both wooed her. Her job, writing a book about the works of a particular artist, sends her off to New York City where she joins up with bohemian photographer, Matt (William Hurt), assigned to assist her. He is immediately attracted to the beautiful Fanette but her penchant to live in the past hampers her from finding the love that Matt makes so readily available.

This melancholy little film, by helmer Tonie Marshall, is a character study by Deneuve as a woman living in the fantasy amour of the past while being confronted with the reality and attraction of the present in the form of Matt. There is not much depth to the story or Deneuve's performance, but the film is elevated above the routine by William Hurt's presence. I give "Nearly Heaven" a C.