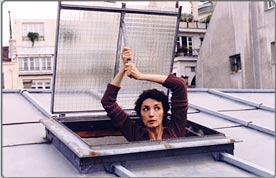 French stage star, Camille (Jeanne Balibar), is returning to Paris after three successful years working in Italy. She left the City of Lights after breaking up with her pretentious boyfriend, Pierre (Jacques Bonnaffe), and has since been living with the owner of the theater company, Ugo (Sergio Castellitto), in which she performs. When he moves his troupe to Paris for a run of the play “As You Desire Me,” Camille's interest in Pierre is rekindled and she has to make some life-changing decisions in “Va Savoir.”

73-year old veteran helmer Jacques Rivette was one of the original contributors to the legendary French film critique publication, Cahiers du Cinema, with the likes of Francois Truffaut, Alain Resnais, Jean-Luc Godard and Claude Chabrol. He, and the rest, began the French New Wave movement and Rivette was the first of these film icons to make a feature film under this aesthetic. He is best known for his memorable “Celine and Julie Go Boating” (1974), establishing his technique of a story-within-a-story.

With “Va Savoir,” Rivette utilizes this method once again, this time leafing in bits of performances of a play while following three women and three men as they become entangled in each other lives during the play’s run in Paris. Camille has lived, for the past two years, in Italy with Ugo and starred in his troupe of players. He made plans to take their current theatrical production on the road to France, but poor advance ticket sales have the director/actor worried. He is also unaware of his lover’s still-smoldering feelings for Frenchman Pierre, an intellectual working on a treatise about German philosopher Heidegger.

Once in Paris, Camille is distracted by her memories of Pierre and it shows in her performance in the play. She forgets her lines, at one point, and relies on other members of the troupe to help her out. She knows, at this point, that she must find Pierre and goes to their old apartment, finding not Pierre but his significant other, Sonia (Marianne Basler). Camille leaves without telling her name, but fully intends to find her ex and confront her past.

Though Ugo is worried over the poor ticket sales for his play, he is also obsessed with searching for an unpublished manuscript by 18th century Italian dramatist, Carlo Goldoni. While poring through the archives in Italy, he meets a beautiful young student, Do (Helene de Fougerrolles), who helps him in his quest. The pretty researcher is very attracted to the actor and she guides him to a small, private library in Paris that may have just what he seeks. He meets the proprietor, Madame Desprez (Catherine Rouvel), only to find out that the lady is Do’s mother. While there, he also meets Do’s half-brother Arthur, a shady, possessive guy who, we find out, uses his seductive powers for his own larcenous gains. Arthur, it turns out, is bent on seducing Sonia for whatever he can get from her to fuel his gambling habit.

Rivette (who co wrote the script with Pascal Bonitzer and Christine Laurent) keeps it light as each player has his/her own agenda of love. This is the kind of romantic comedy that forgoes a simple triangle of relationships as Camille seeks to find out if her decision to leave Pierre, three years ago, was the right one. Complicating this is the fact that she has also developed an affection for Sonia following a disastrous dinner where Ugo, knowing about Camille’s past with Pierre, is less than civil to his girlfriend’s former lover. Ugo is also distracted by his search for the missing Goldoni script, “The Destiny of Venice,” and by the attentions of Do, who challenges the Italian with the choice of a Venetian destiny or a Parisian chance. There may also be something going on between Do and Arthur, too.

The comedy of “Va Savoir” is not nearly as broad as would be seen in an American or British sex farce. It is much more subtle and makes you grin at times but doesn’t generate any real laughs. This is part of the sophisticated French attitude toward sex where infidelity is not overtly confronted, but accepted as a Francophile way of life. This isn’t to say that the members of the each of the couples in the flick tacitly accept their other’s infidelities, real or imagined. When Ugo joins Camille for dinner at the home of Pierre and Sonia, his body language – wolfing down dinner, terse responses to questions and a generally uptight demeanor – speaks for itself the discomfort he has with the situation.

Jeanne Balibar gives an aloof, almost detached performance as Camille. Her character, the temperamental actress, sees life only from her viewpoint, expecting those around her to accept her self indulgence as she decides which man she will end up with – Pierre or Hugo. There is also a dalliance with Arthur, but that is for more altruistic reasons that revolve around Sonia. Sergio Castellitto is terrific as Ugo. He is obviously torn up by Camille’s past and, possibly, future, but is also smitten by the attention by Do and there is a palpable sexual attraction between the two. His search for the missing Goldoni is really an aside to the film’s romantic comedy but there is a natural feel to his obsession that fits the film’s flow.

Marianne Basler and Helene de Fougerolles are both beautiful and talented in their portrayals of Sonia and Do, respectively. Jacques Bonnaffe, as Pierre, is dead on as the intellectual who can be, initially, attractive but, with his own boring obsession with Heidegger, he soon wears on you. I wondered why Camille and Sonia would even be attracted to such a twit. Bonnaffe is good in his performance as the self-possessed Pierre. Bruno Todeschini is suitably slimy as the conniving, selfish Arthur who, we hope, will get his deserved comeuppance.

The structure of the film keeps it from being stodgy and stage bound by interleaving pieces from different parts of different performances of Ugo’s play. By the time the movie is over you build up a pretty fair understanding of the plot of “As You Desire Me” and it helps to keep the film moving along even while making it longer than it would be without this device. Rivette and his co writers do a good job of combining the play within the movie. Cinematography, by frequent Rivette collaborator William Lubtchansky, is static, giving the flick the feel of a stage play being filmed.
Other techs are adequate if unremarkable.

“Va Savoir” is the obvious work of a veteran filmmaker who maintains a sure hand on things, gleaning good performances out of his actors even with the sparse, conventional material at hand. It lacks the sparkle that an outstanding romantic comedy should have, but is an entertaining little farce.