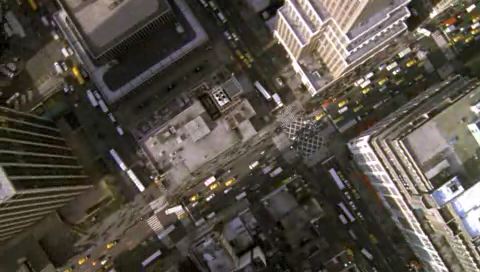 Amenabar's 1997 "Open Your Eyes" was a totally original, if cold and somewhat sterile, look at a privileged, spoiled young man discovering the possibility of love only to lose it when his looks are destroyed.  An unexpected sci-fi twist put the viewer into a head trip of alternative realities.  Cameron Crowe's remake is glossier, warmer and star-powered, although his ending, a highlight in the original, is muddled.  Yet for those who haven't seen the Spanish language film, "Vanilla Sky" certainly provides a unique experience at the multiplex.

Rich and handsome David Aames dreams of cruising into Times Square in his sports car with the slowly dawning horror that it is deserted.  'Open your eyes' says the voice of his lover, Julie Gianni (Cameron Diaz), awakening him to chastise her for presuming to program her voice into his alarm clock. With a pluck of a gray hair from his tousled mane and a devilish grin into his bathroom mirror, David holds his office at bay via cell phone while receiving the jealous awe of best friend Brian (Jason Lee, "Almost Famous") who idolizes the woman David treats as a 'f&*$ buddy.'

David meets with 'the seven dwarves,' the board put in place by his magazine magnate father who resent his controlling ownership of the company before kicking up his heels at a lavish birthday party in his own magnificent apartment attended by the likes of Steven Spielberg.  When Brian introduces David to his new girlfriend Sofia (Penelope Cruz) sparks fly, leaving Brian to drown his sorrows in booze and party crasher Julie to be described by Sofia as 'the saddest girl ever to hold a martini.'  Down-to-earth Sofia tries to resist David, liking neither his disloyalty to his friend nor his capitalist trappings, but after a night spent only talking and a beautiful pencil drawing purchased with a kiss, she begins to fall.  David leaves to find Julie waiting and makes the mistake of joining a murder/suicide attempt masquerading as a joy ride.  She dies, he lives, but his face is mutilated and Sofia's initially skittish until true love and miraculous medical advances restore him.  But David's once again plunged into a nightmare when Julie returns claiming to be Sofia and he's the only one who doesn't believe her.

The role of handsome, cocksure David Aames was tailor made for Cruise with his killer smile and confidence.  His attraction to Cruz, reprising her role from the original film, is palpable and his disfigurement shocking, but the role doesn't provide the stretch for him that his last outing with Crowe did ("Jerry Maguire").  Cruz gives her best English language performance to date as the bohemian, kittenish Sofia.  Diaz makes a stronger impression as the gorgeous model who hides the desperation of her love in order not to drive away the object of her affections, only faltering when she pinch hits as Sofia.  The ever affable Lee neatly slides into Brian's shoes as David's beholden buddy.  Kurt Russell gives a drab performance as David's court appointed psychiatrist.  British character actor Timothy Spall ("Rock Star," "Intimacy") offers good support as David's dishevelled, alcoholic lawyer.  Noah Taylor ("Shine") pops up as a mysterious man who may hold the key to the truth behind David's dilemma.  Alicia Witt (TV's "Cybil") and Tilda Swinton ("The Deep End") have small roles in the film's explosive conclusion.

Crowe's adaptation of the original script is bursting with pop culture references, defining David's character by his favorite Beatle (George) and using images from a Dylan album and iconic movies ("Jules et Jim" and "To Kill a Mockingbird").  He's punched up the central love story, most notably with an original scene featuring Sofia near the end of the film, although his changes to the conclusion itself disservice clarity.  Tech credits are top notch.

In a year when such film's as "Mulholland Drive" and "Waking Life" celebrate the power of dreams, "Vanilla Sky" champions reality, but not before journeying through a nightmare.