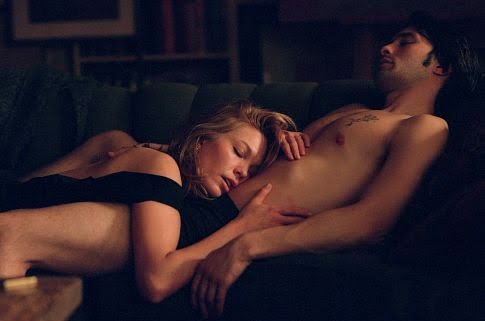 Connie Sumner (Diane Lane, "Hardball") is living a perfect life with her handsome, attentive husband Edward (Richard Gere) and young son in an affluent New York City suburb. After a chance encounter with a mysterious Frenchman (Olivier Martinez, "Before Night Falls"), though, Connie is lured into a passionate affair. One of her lies makes Edward suspicious and he's shocked at the magnitude of his rage when he discovers that Connie is "Unfaithful."

Director Adrian Lyne ("Fatal Attraction") once again explores marital fidelity, but with the more artistic and insightful flair he brought to "Lolita." Loosely based on one of his favorite films, Claude Chabrol's "La Femme Infidele," Lyne's "Unfaithful" is a stylish reflection on passion, guilt and marriage.

Connie and Ed have one of those comfortable, still somewhat sexy marriages that has become focused on its offspring, in this case 8 year old Charlie (Erik Per Sullivan, "Wendigo"). The Sumners live in a big, white, sprawling White Plains farmhouse (a twin to the home in "What Lies Beneath"). He commutes into the city to run his armored car firm. She does too, occasionally, as she dabbles in volunteer fundraising activities. One extremely windy day, Connie's in the city buying supplies for Charlie's birthday party when she literally bumps into and tumbles with a stranger. Paul Martel (Olivier Martinez, "Before Night Falls") is a beguiling younger Frenchman who lures Connie up to his Soho loft to attend to her wounded knee. She flees the first time, but his magnetism keeps drawing her back.

As evidence of Connie's affair mounts, Ed decides to have her followed. With his suspicions confirmed, he decides to confront his wife's lover, but to his horror finds he must confront something far more unsettling within himself.

While Alvin Sargent ("Spider-Man") and William Broyles Jr.'s ("Cast Away") screenplay does not provide any back story for Connie and Ed, Lane and Gere's performances establish the two as individuals and as a marriage. Lane is an affectionate and satisfied housewife who finds a part of herself she'd forgotten at the touch of a mysterious and dangerous stranger. Returning home on the train, Lane's Connie recalls her first time with Paul. Lane's face tells the story as she shows arousal, incredulity and finally shame at her actions. Gere is serene and contented before becoming increasingly troubled and watchful. He becomes unhinged quietly, revealing a desperate need for his wife that rekindles their passion, tinged now with guilt on either side. The two former "Cotton Club" costars share great chemistry, communicating without words.

Martinez amply fills the bill as the reckless romantic used to getting his way with women. His shaggy charm is a convincing temptation. His dark almond eyes are similar to Gere's, too, which make him all the more interesting a choice for Connie's dalliance. Kate Burton ("Celebrity") and Margaret Colin ("The Devil's Own") make strong impressions in one amusing scene where they unwittingly interrupt Connie's assignation with Paul, then ogle the man.

Lyne masterfully uses foreshadowing and suggestive symbolism in "Unfaithful." The windswept, swirling papers and debris of the fateful meeting are present again in a city dump drop off, as well as being suggested by the snow globes Connie collects. The gusty conditions suggest another fateful day in Kansas that took Dorothy Gale to a wondrous new world but found her only wanting to return home, just as Connie does here. Lyne cuts from Connie's tormented train trip to Charlie's birthday party, where horseplay with water pistols alludes to the sexual encounter that preceded it. Ed's trip to a car wash recalls Connie's Amtrak sink sponging.

The story is all charged undercurrents. Ed notes the new lingerie that Connie's laid out with a weight of sadness. When he slips into her sexy bath, she tells him she's cold. Ironically, the couple reconnect with a lie, this time presented jointly to an outside party. As with "Fatal Attraction," Lyne fought the studio to maintain his film's ending. Luckily, this time test audiences smartly agreed with an ambiguous finale that let's one draw one's own conclusions. Lyne's only misstep is a heavy handed display of Ed's desire for loyalty when he fires an employee (Chad Lowe, "Driven") for entertaining other offers.

"Unfaithful" is a complex adult drama, stylishly told, that may finally catapult Lane onto the A list.

Edward and Connie Sumner (Richard Gere and Diane Lane), with their son Charlie (Eric Per Sullivan), are the quintessentially happy family. They live in a rambling 19th century home in Westchester County, own a thriving armored car company and all is right with their world. Until, one windy day, when Connie is, quite literally, blown into the arms of a handsome, hunky Frenchman in Adrian Lyne's "Unfaithful."

Diane Lane gives one of her best performances to date, this time as the star instead of her usual supporting roles. Following her inadvertent collision in the streets of Soho with saucy Frenchman Paul Martel (Olivier Martinez), she is obviously attracted to the good looking charmer when he invites her in to take care of her injured knee, but resists the temptation of those soulful eyes and strong arms - though, not for long. When she gives in to the temptation of an erotic tryst, what follows is some of the tightest, on the edge acting as Connie heads home on the commuter rail. We watch the emotions wash over her as she is initially warmed by the thoughts of lovemaking, then the even stronger surge of guilt over her infidelity hits her. It is a powerful, richly emoted scene and probably the best in the film. The actress also goes out on a limb with the strong physically sexual performance opposite Martinez.

Richard Gere has moved from the young stud roles into a more mature stage in his acting career and is convincing as Edward. His marriage to Connie has been routine but happy, so when the affair begins, he is sensitive to the waning signs. Connie is distracted all the time and, as her affair intensifies, she pushes her husband away sexually. He notes that her outfits for going "in town" for her charity fundraising work include new, sexy underwear. When he catches her in a lie, he sets the wheels of investigation into motion. What Edward finds out proves too much for the man.

Olivier Martinez is the boy toy of the flick and fits the bill. He's good looking in a way that harkens back to Gere's early days and Connie's attraction to the younger man makes sense, in a seductive way. Paul is used to having his way with women and it proves his downfall. Erik Per Sullivan doesn't do anything special as the Sumner's vacuous son, Charlie, not even looking particularly cute.

The screenplay by Alvin Sargent and William Broyles, Jr. moves along at a brisk pace as Connie begins her fling, loses the sense of risk and begins to appear in public with her amour. Becoming more brazen, she even has an assignation with Paul in a restaurant bathroom while her friends chat amiably only feet away. The paths of guilt and deceit twist midway through "Unfaithful" as it becomes much more than an affair to remember, but that's enough said.

Techs are solid with cinematographer Peter Biziou utilizing tight close ups, especially during the intimate scenes, so there is a good deal of style rather than titillation. Costumes, designed by Ellen Mirojnick, are subtle but entirely suitable. Lane is dressed to the nines when seeing Paul and loose and baggy when at home with the family. Gere is decked out in frumpy attire as befits a middle-aged guy comfortable with himself and his family.

"Unfaithful" may attract a predominantly female audience but is well done and makes a good date flick for more mature young adults and beyond.