Under the Sand (Sous le Sable) 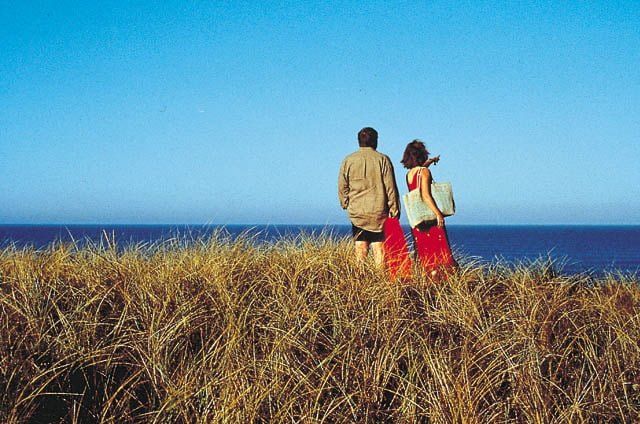 Marie (Charlotte Rampling, "Aberdeen") and Jean (Bruno Cremet, "Sorcerer") are a comfortable, sixty-ish married couple looking forward to a peaceful vacation at their second home in Lit et Mix. On their first, full day, Marie sunbathes as Jean goes for a swim. Hours later, Marie's initiated a full scale search when Jean hasn't returned, but no trace of him is found. Marie returns to Paris and resumes her life, including chats with Jean at the end of each day in Francois Ozon's "Under the Sand."

Marie's ex-pat British friend Amanda (Alexandra Stewart, "Frantic") and her French husband Gerard (Pierre Vernier) try to snap Marie out of her denial with a dinner party, where they introduce her to the handsome Vincent (Jacques Nolot, "Nenette et Boni"), yet Marie suggests that Gerard accompany her and Jean to their gym the next morning. Eventually Marie does begin dating Vincent, but she discusses him with Jean and even smiles at Jean, hidden behind a bedroom curtain, when she makes love to Vincent.

Slowly, though, reality continues to chip away at Marie's fantasy life. Her bank advises her that without access to Jean's account, she needs to reduce her spending. One of her university students (she's reading Virginia Woolf's "The Waves") turns out to be one of the young men who participated in the beach search. Then police arrive asking her to identify the clothing of a body they've found washed up from the ocean. That night, Jean's not at home when she returns to their apartment. Her mother-in-law (Andree Tainsy) cruelly insists that Jean simply abandoned her out of boredom. Finally, Marie goes to the police, insisting on viewing the body. Horrified (she's been warned it was in an advanced state of putrefication), she laughs when handed a bagged watch, insisting that this is not her husband.

"Under the Sand" is a character study and melancholy portrait of aging ('I've lost my youth,' Marie declares) and loss. Charlotte Rampling, given the chance to portray an older, yet still sexual, woman runs with it, bringing us into the mind of the character. Her chemistry with Bruno Cremet is startlingly natural. As Marie returns from her first date with Vincent, she sits on the couch with Jean. 'Did he kiss you?' he asks. The mood the two create is incredibly intimate and sad.

Ozon ("Water Drops on Burning Rocks," "See the Sea"), who cowrote the script with Emmanuelle Bernheim, Marcia Romano, and Marina de Van, has turned in a more mature work than his previous, creepy "See the Sea." While he cleverly never lets us see Jean enter the water that fateful day, leaving a number of possibilities - accident?, suicide?, escape? - open, he definitely tips his hand towards a certain outcome.

"Under the Sand" is a unique portrait of loss. It would make an fascinating double bill with Liv Ullmann's "Faithless" from earlier this year, another character study of a woman facing loss for different reasons.

Marie (Charlotte Rampling) and Jean (Bruno Cremer) have been married for 25 years and, to the entire world, appear to be quite happy together. While vacationing at their summer home at Lit en Mix in southern France, Jean decides to go for a swim. When, a little later, Marie turns to look for him, he is nowhere to be found. A frantic search turns up nothing and Marie returns home convinced, in her mind, that her husband is still alive in "Under the Sand."

Charlotte Rampling commands the screen with her character study of a woman walking the fine line between madness and sanity. The shock over the disappearance of her husband drives her into a world of denial as she carries on with her life, believing that Jean is still with her. When out with friends, she talks of him in the present tense. When shopping for herself, she picks out a tie that she thinks he would like. Her friends, especially best friend Amanda (Alexandra Stewart), fear for her sanity.

Marie undergoes a continuous struggle between acceptance and denial over the loss of Jean. Her friends realize her conflict and do what they can to help, but Marie's denial is too strong for anyone, even Amanda, to break through to her. When she meets Vincent (Jacques Nolot), it appears that she may, finally, accept he loss and get on with her life. But, Jean's hold on her is too strong and she continues to live in her own delusional world.

Rampling gives an unabashed performance as a woman on the brink of madness. The mental turmoil she undergoes is plainly evident on her face as her mind battles between denial over Jean's disappearance and acceptance of the fact. Director Francois Ozon uses the actress's exotic looks and expressive features to show the fight taking place within her mind. The actress lays it all on the line and gives a notable performance. The rest of the cast does well enough fleshing out the background, but it is Rampling's film from beginning to end.

Madness is a tough subject matter for film and could be a turn off for the viewer. Films like "Diary of a Mad Housewife" (1970) gave a no holds barred look into the frightening world of mental illness and are harsh in that depiction. "Under the Sand" has the same relentless grip, but with an oddly hopeful feel. Marie is a likable, complex and beautiful character that deserves happiness and continues to live in he deluded world where Jean still exists, alive and well. Rampling's stunning performance makes you want to believe she is sane, even as she falls deeper and deeper into her psychosis.

Charlotte Rampling's performance, alone, is worth the price of admission to "Under the Sand."