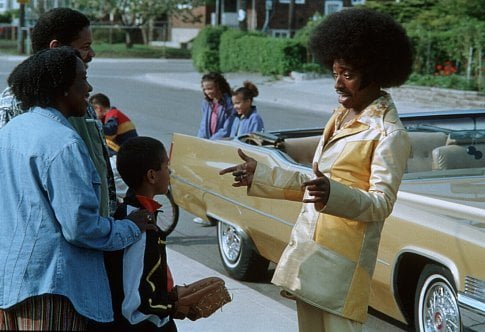 A ruthless, secret organization, led by The Man, is about to unleash a powerful psycho-hallucinogenic drug on an unsuspecting world that will reduce the entire African-American population to mindless zombies. A group of Good Guys, called the B.R.O.T.H.E.R.H.O.O.D., must stop the evil plot and enlist the help of their own secret weapon, a man willing to put his life in danger, a man called "Undercover Brother."

"I want the White House to stay white!" says The Man to his henchman and lackey Mr. Feather (Chris Kattan) and unleashes a potent mind control drug with his first victim a prominent black man. General Boutwell (Billy Dee Williams) has had an illustrious career and is destined to become the first black American president, until he is drugged with the mind-bending potion. Suddenly, he isn't running for president, he now plans to open a chain of restaurants called "General's Fried Chicken." This obvious change in the would-be-candidate causes the Good Guys to jump to action and infiltrate one of their agents into Multinational, Incorporated, the lair of The Man.

Enter Undercover Brother (Eddie Griffin), a cool dud with a huge Afro, mutton chop sideburns and a penchant for funky 70's polyester. He drives a vintage, 1972 gold Cadillac convertible, drinks orange soda and can handle any situation that arises. Well, almost any situation. His bellicose boss, The Chief (Chi McBride, who bundles every shouting chief/captain/boss character into the noisy, funny role), also assigns foxy Siesta Girl (Abundance Ellis) to help the brother. U.B. infiltrates the mega-corporation but The Man throws his own secret weapon in the way - Penelope Snow, AKA White She Devil (Denise Richards), a gorgeous bombshell capable of stopping the B.R.O.T.H.E.R.H.O.O.D.'s plans cold.

My expectations weren't very high going in to "Undercover Brother." I was hopeful, but I expected only a few chuckles along the way and wasn't prepared for the funny, witty, goofy spoof that kept me and the rest of the audience in stitches. "U.B." goes for the lowest common denominator in humor and has a thoroughly good time wallowing about in it. The General, totally controlled by The Man," announces an ad campaign at his restaurants - "The Nappie Meal," a bucket of fried chicken and a bottle of malt liquor. There is a one-liner riff on "The Sixth Sense" that got a chuckle from many aud members. A chase scene, with golf carts, is goofy, absurdist fun. There is also homage paid to that black private dick, Shaft, which is almost reverential.

The screenplay, by John Ridley, throws the gags at you in rapid order. It isn't the machine gun rapidity of "Airplane!" but they come fast enough that you don't mind when a joke falls flat. There is always another one on the way. The makers, led by helmer Malcolm D. Lee ("The Best Man"), keep it fresh and brisk as they spoof the blaxploitation films of the 70's in a rapid-paced manner (the run time is a scant 83 minutes - just right for this kind of comedy flick). "U.B." isn't a laugh-a-minute riot fest but the sustained jokes and gags are frequent and steady enough to keep the viewer amused from start to finish.

The large ensemble cast appears to be having a great deal of fun from Griffin, who is perfectly cast as the Undercover Brother, to the supporting members of the ensemble. Everyone enjoys chewing the scenery, especially Chi McBride as The Chief and Neil Patrick Harris (of "Doogie Howser, M.D." fame) as the B.R.O.T.H.E.R.H.O.O.D.'s token white (he's hired as a part of an affirmative action program). Harris plays up the white boy gag and has a sudden turnaround when the bad guys call him a sissy. Denise Richards is fine as White She Devil and newcomer Aunjanue Ellis very good as U.B.'s capable sidekick Sistah Girl. David Chappelle is suitably paranoid as the organization's Conspiracy Brother and Kattan puts an oddball persona on lackey character, Mr. Feather, who was his own special weapons like Odd Job or Jaws in the Bond flicks. Gary Anthony Williams is eminently likable as the Good Guys' whiz kid, Smart Brother.

Techs are solid all around. The retro flair of the 70's is captured in makeup and costume, especially for U.B., and with the look and feel of that era's black detective flicks. Lenser Tom Priestly contributes, strongly, to the throwback look of the film, especially with the action over the opening credits. Special F/X are clunky but functional. You don't get the high tech toys of a James Bond film but you get the spirit of the Bond movies (and their spoofs) throughout "U.B." Music, much of it 70's funk, hits the bull's-eye.

With the sci-fi blockbusters and the adult-alternative films dominating the screens at the local multiplex, there is a sizable opening for a spoof comedy that carries its share of laughs - sometimes a chuck, sometimes a guffaw and, to my great pleasure, the occasional belly laugh. Common denominators notwithstanding, "Undercover Brother" is a solid, goofball comedy that maintains a thread of wit through its length and that's a good thing for summer entertainment.