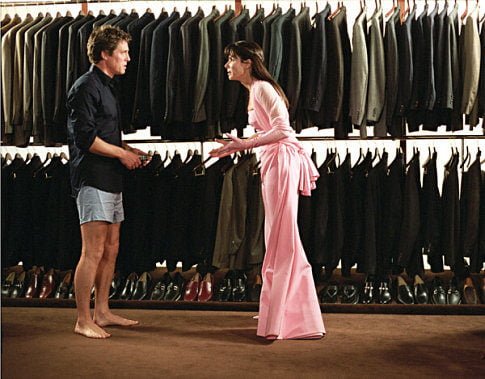 Lucy Kelson (Sandra Bullock) is a Harvard Law graduate and environmental advocate trying to save neighborhood landmarks in New York City. When millionaire real estate developer George Wade (Hugh Grant) is tasked by his brother to get a new Chief Counsel who isn't a bimbo, he strikes a deal with Lucy - she'll work for him if he saves her parents' Coney Island Community Center from the wrecking ball. After a year of devoting herself to George's every whim, Lucy yearns for a social cause again and gives "Two Weeks Notice."

It is the stuff of every romantic comedy - a man and a woman cannot see how perfect they are for each other - and when that man and woman are Grant and Bullock the air is charged with well-timed repartee. Just as Bullock has announced her departure from the genre, she's found her perfect partner.

We're introduced to Lucy as a Birkenstock wearing activist lying in the street to save a building. George is the Wade brother who charms in public appearances while brother Howard (David Haig, "Four Weddings and a Funeral") runs the business. George also hires female lawyers with questionable credentials and is on his second or third divorce.

Once George hires Lucy, he accepts her capability with little comment, but emphasizes his need for her assistance in his personal life. Two a.m. phone calls and weekend emergencies over which tie to wear ensue. When Lucy tries to quit, George blocks her attempts to find employment elsewhere, but finally he relents if she agrees to find and train a replacement. Enter June Carter (Alicia Witt, "Vanilla Sky"), a young woman with no scruples about landing her millionaire boss. Lucy and George don't even realize why they've begun to fight as their professional relationship draws to a close.

Marc Lawrence, who coscripted the witless "Miss Congeniality," makes his directorial debut with his third Bullock screenplay and three proves the charm. He plays upon Bullock's tomboy qualities by making her a compulsive overeater and relative fashion disaster and neatly contrasts her klutziness with Grant's suave style and quick wit. Bullock and Grant, who made for memorable interviewees on the red carpet at last year's Oscars, are ying and yang personified. This is a couple who could have formed a franchise.

Grant's background is peopled with his all-business brother and a snobbish sister-in-law, but Bullock's given wonderful support by Dana Ivey ("Orange County") and Robert Klein ("One Fine Day") as her liberal parents. Ivey is law professor Ruth, who despises everything Wade stand for while Klein's Larry is the more easy-going dad. Alicia Witt is blandly opportunistic as June, a disappointing turn from a young actress who has showed potential.

The real estate angle provides an opportunity to celebrate New York City's architecture anew post-September 11, with a helicopter ride that showcases the Chrysler Building, an outdoor party beneath the Brooklyn Bridge and the aforementioned Coney Island Community Center.