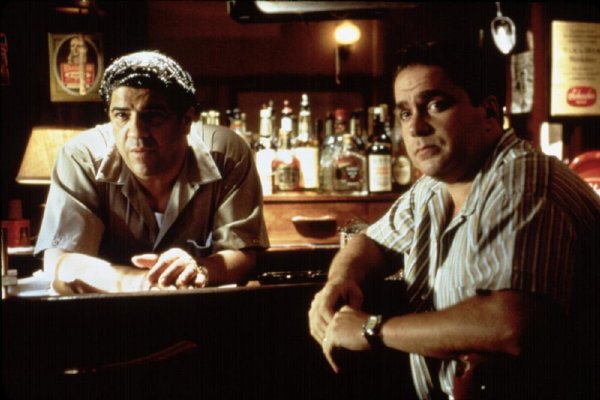 Buddy Visalo (Michael Rispoli, "Summer of Sam") dreams of becoming a singer after Arthur Godfrey catches him at an armed forces show and asks him to audition. Once Buddy's back from WWII, his fiance Estelle (Katherine Narducci, HBO's "The Sopranos") and her parents refocus him into a more 'practical' career working at a local factory and living with the in-laws on Staten Island. Eleven years later, when a ramshackle two family house is within his financial reach, Buddy thinks he and Estelle can live upstairs and convert the downstairs into a tavern where he can entertain in this year's Sundance Audience Award winner, "Two Family House."

Estelle hates the house, but just knows that Buddy will lose it anyway. She appears to be right when they can't get rid of their upstairs Irish immigrant tenants, the O'Nearys (Kevin Conway, "The Quick and the Dead," and Kelly Macdonald, "Trainspotting"). Things get even worse when the woman, Mary, who is hugely pregnant, gives birth to a black child. Mary's abusive husband Jim abandons her and Estelle demands that Buddy throw her out to quell the neighborhood gossip. This he does, but guilt nags at him and, even though he's short on cash himself, he sets her and her child up in a pleasant little local walkup. Soon, Mary becomes the encouraging sounding board he's never had in Estelle.

This is a nice little film, featuring some good performances. Rispoli is genuinely likeable, a decent man with modest ambitions. His quandary when Estelle demands he throw a young mother out on the street is written all over his face. When he finally lets his emotions out (to Mary), he sinks to his knees and balls his fists in his eyes, then regains his composure and tries to convince Mary (who's not buying it) that that really wasn't like him. His final scene with Estelle contains a simple gesture that's incredibly moving.

Katherine Narducci makes Estelle frustrating for the audience when she not only refuses to support Buddy, but belittles him to her girlfriends, yet we can only sympathize with her knowing that her behavior is driven by fear and the parochialism of her 1950s community. (De Felitta's script helps her when Buddy's failed business ventures are chronicled in an amusing montage.) She's willing to help Mary until the color of Mary's child introduces concepts beyond her grasp.

Kelly Macdonald ("Trainspotting") is less engaging than the two leads, initially suspicious, she barely warms up. She is sweet when attempting to purchase Italian groceries, mispronouncing everything, to learn cooking from Buddy.

Writer/director Raymond De Felitta ("Cafe Society") has based his story on his uncle, although he's given him a happier ending. De Felitta shows more strength in his direction than his writing. While his dialog rings true for its time and place (a lot of ethnic and racial slurs are flung around), his story telegraphs its every move. The film's climax begins powerfully, but devolves into a stickily sweet romanticism that logically doesn't ring true.

Still "Two Family House" is an engaging slice of life that I would particularly recommend to the generation portrayed, the ones that begat us baby boomers.

Buddy Visali (Michael Rispoli) had a big chance, once. When he was in the Army, he was spotted by big-time radio talent, Arthur Godfrey, while singing to the troops and was offered an audition. But, his then-fiancie, Estelle (Katherine Narducci), gave him an ultimatum - choose between her and a singing career. He chose her. Now, it's 1956 on Staten Island and, after a string failed businesses, Buddy comes up with a new plan. He's going to buy a two family house, live in the upstairs flat and open a bar, Buddy's Tavern, downstairs in "Two Family House."

Buddy is a hard luck guy. When he gave up his chance to audition for the famous radio personality - the offer instead went to the crooner Julius LaRosa - Estelle decided to let him dream his dreams and start a new business, knowing that he would fail. Buddy's limo service, a housecleaning business and a pizza delivery enterprise all went belly up. His latest venture - converting a two-family house into a home and tavern - is looked upon as just another hair-brained scheme that Estelle hopes and counts on to fail. And, it looks like she's correct when they meet the tenant living in the house, an Irish drunkard named Jim O'Neary (Kevin Conway).

When Buddy tells O'Neary and his young, pregnant wife Mary (Kelly Macdonald) that they have to leave, O'Neary rubs the new landlord's nose in the fact that the law prohibits their being thrown out of the apartment. Not only that, the belligerent tenant even declares that he doesn't plan to pay the rent, either. The feud that develops nears violence when suddenly Mary breaks water and has the baby in the house. The baby, a boy, is, to O'Neary's shock, of mixed race, driving the stunned Irishman out of Mary's, and Buddy's, life forever. Mary, though, is left behind with a new baby, no money and little hope. Buddy asks her to leave.

Buddy can't get Mary out of his head and tracks her down at a nearby sleazy hotel. He finds her and the baby an apartment, mainly out of an inner sense of guilt and responsibility, and begins to take care of them. Meanwhile, he finds out that Estelle neglected to tell him that they are in danger of draining all their savings to build the bar and Buddy has to work a double shift to make the needed money. He also falls in love with Mary and begins an affair with the now single mother. Buddy lives on the edge for a while, busting his hump with two jobs and building the bar while carrying on with Mary. Eventually, Estelle gets suspicious and all hell breaks loose for Buddy.

Sophomore helmer, Raymond De Felitta ("Cafi Society"), based his screenplay for "Two Family House" on the life of his own Uncle Buddy, a troubled man with his own dreams of escaping his ill-fated life. The author took this basis for his story and builds a warm-hearted, sometimes charming (and, unfortunately, very predictable) slice of life story about an average Joe who just wants his own comfortable niche in this crazy world. The movie Buddy has a fine singing voice and has always felt deprived of a successful career when he gave up his chance to audition for Godfrey's radio show. In his latest dream, he sees himself as not only a successful tavern owner, but also as the entertainment that will draw crowds to his bar.

The predictability of the story is apparent early on. The fractures in the foundation of Buddy's marriage to Estelle become obvious fairly quickly as we learn that she withheld crucial information from Buddy about their finances and has been undermining her husband for years. As he becomes more involved with Mary and is finally confronted by Estelle, he sees that the good Italian Catholic things, keeping a marriage together despite the problems, is not part of his dream. He comes to the conclusion, when they meet on neutral turf, that Estelle is not, after 11 years of marriage, for him. This, and other plot lines, especially involving Mary, is telegraphed far in advance of the film's conclusion. This makes the last half of "Two Family House" a matter of marking time as we await the inevitable ending.

The key players - Rispoli, Macdonald, Narducci and Conway (though his notable perf as the stereotypical drunken Irishman is all too brief) - are the reason to watch "Two Family House." Rispoli, best known, lately, for his continued appearances on HBO's "The Sopranos," does a fine, credible job bringing life to the working class dreamer, Buddy. His hopes and frustrations are brought forth as real and believable and you root for the guy's success. Macdonald is assured in her portrayal of Mary, a young woman who stands by her decisions and actions, right or wrong. Narducci is first rate as the conniving wife who plays off of her husband's failure. It's not until late in the story that he realizes just how manipulative she has been for all their years of marriage. Conway, as I said, gives a powerhouse perf in his small, but important, roll.

The supporting cast does not add much to the proceedings. Buddy has the usual gang of pals who gather around to urge the man to fulfill his dreams. Estelle has her own generic gaggle of confidants to conspire with in her schemes to foil Buddy's plans. They help to give some character depth with their numbers, but none of the supporting crew makes any indelible impression on the viewer.

The behind-the-camera crew does yeoman's work catching the images and the actions of the actors. The film captures the 50's period feel well with locales and costume fitting the bill. Other techs are run of the mill.

"Two Family House" won the Audience Award at this year's Sundance Film Festival and it is a likable little flick with a solid lead cast, but with few, if any, surprises.