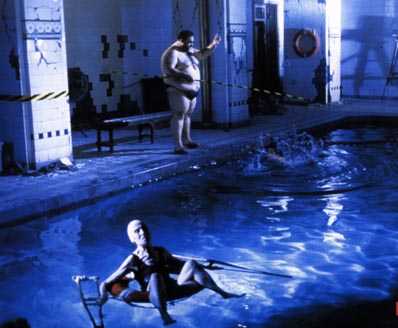 In Eastern Europe, Anton (Denis Lavant, "Beau Travail") desperately tries to maintain the crumbling Baroque bathhouse that is his elderly parents' business. Dotty mother prefers buttons as payment and blind dad officiates at the pool with a whistle, not knowing that his good son is playing a tape of pool frolicking to a mostly empty room. Meanwhile Anton's brother Gregor (Terrence Gillespie) is trying to make a buck by demolishing the old to make way for the new and tries to curry dad's favor with cold hard cash. Anton's loyalties are further tested when a scuttled sea captain brings his lovely young daughter Eva (Chilpan Hamatova) into town in "Tuvalu."

While the story about two brothers trying to preserve their father's bathhouse in a country eager to modernize recalls the recent Chinese film "Shower," this mostly silent, tinted black and white film can also point to Chaplin's "Modern Times," as Anton and his father cater to the Imperial, a majestic heating machine in the basement whose thwumps and rattles are the pulse of the pool. The love story is certainly unique, with the naive Anton constantly caught sniffing at Eva's underthings. A visit from an inspector results in a comic set piece right out of the Keystone Kops.

Emil Christov's stunningly clear black and white cinematography presents images from another time, like a neo-Guy Maddin flick. His imagery is never more beautiful than when capturing Eva underwater in the pool, having a nude swim along with her fish in its big glass bowl.

Production design, costume and makeup are all splendid, with Anton dressed like a Nice fisherman while brother Gregor resembles Eraserhead's Henry crossed with Lyle Lovett. Locations in Sofia, Bulgaria and at the Black Sea were the result of arduous scouting that paid off perfectly.

Tuvalu is the name of an island on a map in the Sea Captain's chest - treasures can be found here.

The building that houses a grand, old bathhouse is falling to pieces. Anton (Denis Lavant) has grown up as the apprentice to the master of baths, his blind father, and has spent his life convincing dad that the baths are intact and popular. His conniving brother Gregor (Terrence Gillespie) wants to destroy the local landmark and the rest of the town, build a futuristic city to make millions and will use whatever means to get his way in the fantasy/comedy/romance, "Tuvalu."

This is a wildly whimsical film that utilizes broad slapstick humor, manic pratfalls, a funky little romance, a tale of loyalty to parents, sibling rivalry, greed and more. Director Veit Helmer, from his screenplay with Michaela Beck, creates, in his debut film, a world that is a combination of comic book story and classic silent comedy. It succeeds in creating a world where sound and illusion mask the reality of the decay of beloved baths owned by Karl (Phillipe Clay), Anton and Gregor's sightless dad. As Anton struggles to hide the fact that the place is falling apart, he must also cope with the sneaky efforts of his brother. Gregor enlists the help of pretty Eva (Chulpan Hamatova) who mistakenly agrees to help the greedy brother. It seems her father was killed by falling masonry in the baths and Eva wrongly blames Anton.

Denis Lavant plays simple Anton from youth to adulthood (with the tricks of photography to help the transition) and gives the role the necessary comic physicality. Actually, Lavant reminds me a lot of Dominique Pinon as the rubber-faced handyman in the post-apocalyptic comedy, "Delicatessen." (In fact, "Tuvalu" reminded me a great deal, in spirit, of the latter movie.) Anton wants to be out on the open sea, piloting a ship. Eva, though initially opposed to Anton because of said accident (which Gregor, I'm sure, had a hand in), has the means to make Anton's dreams come true with her inheritance from her deceased sea captain father - a tugboat. Hamatova provides both the pretty looks and physical ability to aid in pulling off this near silent fantasy.

The rest of the cast has the appropriate cartoon personas, especially Gillespie as brother Gregor, the mean-spirited bad guy. Clay is imposing as the aging father, but he resorts to inflatable body prosthetics to create this imposing figure. Anton's mom, Martha (Catalina Murgea), good naturedly goes along with whatever plot her younger son dreams up to save the pool as long as the clientele pay her for admission - with buttons.

The filmmakers use a near-silent technique to tell the story. There are a few words spoken, but they are universal and need no subtitles. This technique may put off some potential viewers, but if you can steel yourself for a unique film experience, you'll appreciate helmer Veit Helmer's intelligent effort. For others, even the short (under 90 minute) run time may prove daunting. I hope that the more daring film-goers out there are willing to try something very different to what we are used to and give this wonderful, funny, clever little flick a try.

Production kudos for the selection of the marvelously decrepit set of the rambling, falling apart bathhouse (actually filmed in a run down bathhouse in Sophia, Bulgaria) and Rube Goldberg pumping system that is the heart of the place. The use of tinting the black and white film in various colors helps signal scene transitions and moods throughout the film, allowing the story to be told in few words. This is intelligent, experimental filmmaking and reps a remarkable debut by Veit Helmer. Adult film fantasy is not an easy world to create and "Tuvalu" creates just such a fantastic world.