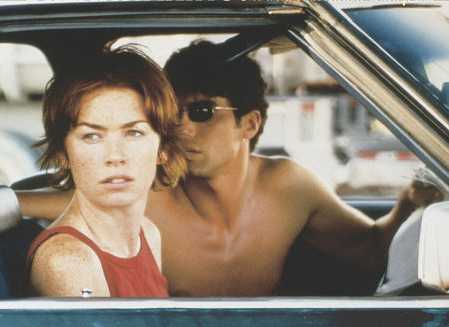 Tully Coates Jr. (Anson Mount, "Crossroads") spends his days enjoying the allures of the local ladies who effortlessly fall into his path while growing increasingly frustrated trying to learn how to run the family farm from his taciturn, secretive father Tully Sr. (Bob Burrus, TV's "The Guiding Light"). When younger brother Earl's (Glenn Fitzgerald, "The Believer") best friend, neighbor Ella (Julianne Nicholson, "The Love Letter"), returns home from school, Earl turns a watchful eye on Tully's skittish interest in the young woman. Just as Ella gains Tully's trust, he discovers two earth-shattering secrets he's been being guarded from by Earl and his father in "Tully."

After an arduous, two year trip to theatrical distribution, the multiple festival award winner "Tully" arrives to make its mark as a true American independent. Based on the O'Henry prize winning story by Tom McNeal by coproducer/writer/directory Hilary Birmingham, this pastoral coming of age film allows devastating events to slowly attain emotional power.

Tully takes sex for granted, most recently getting entangled with possessive stripper April (Catherine Kellner, "Spring Forward"). He ignores disapproving looks when he buys condoms by the dozen. He's a good-looking guy with broad shoulders for farm work and little time for introspection. Lying on the hood of his car with April, she tells him his face is bland - 'a girl could make it into any of six different happy endings,' she observes. Ella's fresh-faced friendship proves a natural draw for Tully, though, and increasingly he finds himself in her company.

Brother Earl is Tully's opposite, darker and brooding, sensitive and thoughtful, but with enough sense of humor to enjoy Tully's comeuppance by April, who destroys and hangs his car's hood from a tree when she finds he's shared it with another. Tully Sr. gruffly chides his son for the incident, but he's secretly trying to save the farm from foreclosure caused by debt from a most surprising source. When Tully Jr. is buffeted by a one-two punch, followed by an earth-shattering tragedy, he runs from emotional involvement with the first woman who has engaged his heart.

Hilary Birmingham directs her film so that one scene effortlessly flows into the next, letting us experience the world she's created as one would experience rural life. Tully Sr.'s weekly trip to the store for his six-pack carries as much weight in developing his character as a heart-to-heart with his son Earl. John Foster's ("The Adventures of Sebastian Cole") unfussy photography is the perfect accompaniment to Birmingham's style.

Anson Mount gets into the nature of a simple guy suddenly presented with complex issues. Mount brings Tully through incomprehension and hurt to maturity and the beginnings of emotional depth. Julianne Nicholson tells us everything about Ella's feelings for Tully when they first run into each other. Her body language signals attraction, but her intelligence screams caution. When Tully asks what kinds of things she's seen in this small town to interest her, she archly replies 'I did see Jill McIntire get out of your car in the middle of the wash cycle.' Glenn Fitzgerald, a young actor building a solid body of work, again makes an impression as the younger brother who is more worldwise and thoughtful than his elder sibling. Burrus gives a restrained performance that nonetheless paints a full character. In a small role, Natalie Canerday gives the film underpinnings of longing and melancholy as Claire, a supermarket clerk vying for Tully Sr.'s attention.

"Tully" quietly pulls you into its sun drenched style of American Gothic in the Heartland.